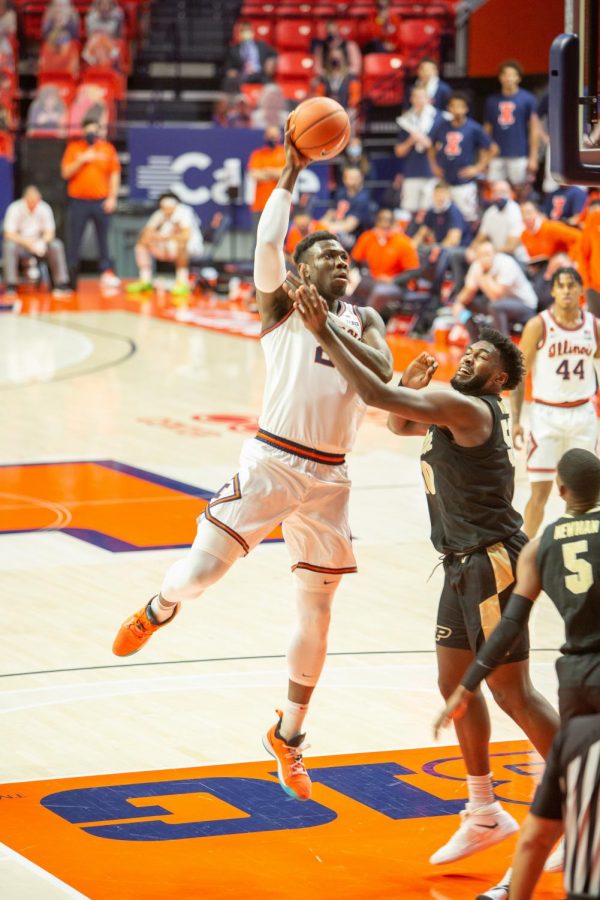 Kofi Cockburn goes up for a shot in Illinois’ game against Purdue on Saturday. The Illini won 66-58.

Entering the calendar year 2020, Da’Monte Williams’ role was established. A smart player with defensive versatility. Shooting and offense were not used to describe the Peoria native. But after an offseason of work, Williams’ jumper has looked much improved.

And in the first game of 2021, it was Williams who hit the big shot to end a 17-0 Purdue run. Illinois seemed revived after that Williams three, as they went on to defeat Purdue 66-58.

For Williams, it was another game to showcase how much he’d grown, transforming from a 28% three-point shooter to a 67% from behind the arc.

“Those are shots I come in and take each and every day. Before, during and after practice. So (I’m) just getting in a routine, stepping up and knocking it down.”

Both Purdue and Illinois were impressive defensively out of the gate. The inside presence of Purdue’s Zach Edey made it daunting for the Illini to score inside. The 7-foot-4 freshman registered three blocks in the first half alone. Illinois doesn’t have a single player with Edey’s size, but they collectively thwarted Purdue in the paint. They had five blocks as a team in the first half. Purdue scored just 23 points on 31.3% shooting from the field.

Offensively, it wasn’t Illinois’ best half. But they were paced by Ayo Dosunmu, who steadied them with 12 points. Williams was not far behind with eight points.

Purdue wouldn’t fold. An Aaron Wheeler three right before the conclusion of the first half gave them some life. The Boilermakers started the second half on a 14-0 run, thanks to four missed free throws by Cockburn, to take their first lead of the game 35-33. By the time Williams finally found the basket for Illinois at the 15:35 mark, the Illini trailed 39-36.

On the ensuing possession, Williams was open for three in the corner. Instead of shooting, Williams took one dribble in and drew a defender. He fired a pass over to Dosunmu at the top of the key, who swung the ball one more time to the wing, to find an open Trent Frazier. Frazier buried a three and from there the game was tied at 39.

“The game is about runs, so teams (are) gonna make they runs,” Williams said. “So it’s on us to stay together and do what we do every day.”

From there, Illinois used a balanced offensive effort to pull ahead. Even with Dosunmu scoring zero second-half points, Illinois’ role players stepped up. Cockburn led the way with 14 points, Williams finished with 12 points. Freshman guards Andre Curbelo and Adam Miller each had strong outings. After going scoreless in two of the previous three games, Miller poured in 10 points, while Curbelo had a typically solid outing with eight points and six assists.

Despite Dosunmu’s quiet scoring night, Underwood was happy with his performance, as well as the offensive balance he had been yearning for.

The win puts Illinois at 4-1 in conference play, in second place behind 3-0 Michigan. They’ll look to continue their winning streak on Thursday against Northwestern.