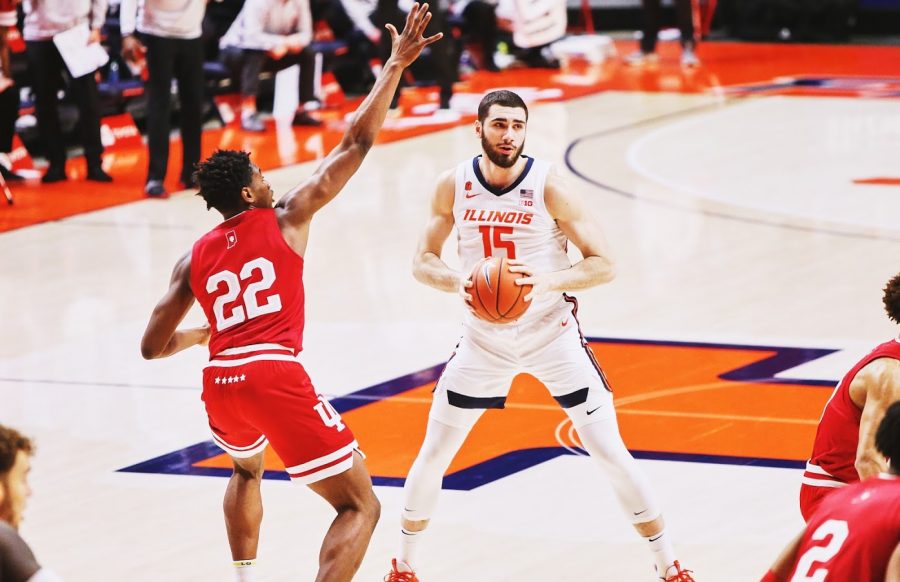 Junior Giorgi Bezhanishvili lookd to pass during the game against Indiana on Dec. 26.

For the first time since the season started, the Illinois men’s basketball team finally got some much needed time off. Following their win against Indiana, Brad Underwood’s squad took three days off of practice.

“We needed it,” Underwood said. “We were a tired team in the Indiana game. Not to take anything away from them, we were really flat. That was a hard-week of travel. You throw in the emotion of Christmas Day, not being with families, something a little different.”

The team resumed practice on Wednesday, practicing twice. Underwood said the team energy has been good in practice. The bigger gap between games has allowed the group to focus on team-orientated things and not just prepare for their opponent, which Underwood thinks has benefitted this group.

“We have the time to afford to spend on some of the basic stuff, on closeouts, on things we haven’t done well,” Underwood said. “Realigning footwork in ball-screen coverages, realigning the stuff we haven’t done well. Really focusing on that and not feeling a need to move on too fast because we have to cover Purdue or the next opponent. We literally went back to the basics on Wednesday on both ends of the court.”

Illinois will get the chance to show its improvements on Saturday against a solid yet unspectacular Purdue team. The Boilermakers (7-4), have shown they are capable, beating Ohio State and Maryland. They don’t have any bad losses yet.

Purdue is a balanced team, with five players averaging over nine points per game. They are led by 6-foot-9 junior forward Trevion Williams inside. Freshman Zach Edey, a 7-foot-4 center is playing only 14 minutes per game but is an x-factor with his length. Illinois could look to use a two-big lineup of Kofi Cockburn and Giorgi Bezhanishvili, as that duo was effective in the win over Indiana.

“If you remember back last year, there was a lot of success with Giorgi passing the ball into Kofi,” Underwood said. “We needed that at that point. He provided. On the defensive side, I really feel comfortable with Giorgi guarding other fours in this league.”

However, Purdue’s outside attack is just as potent as their inside attack. Point guard Eric Hunter has proved to be a quality creator, and he’s surrounded by two knockdown shooters in Sasha Stefanovic and Brandon Newman. Both Newman and Stefanovic shoot over 41% from deep. Purdue as a team takes over 23 threes per game, making them at a 37.5% clip.

The game is scheduled for 5 p.m. central time and can be watched on the Big Ten Network.