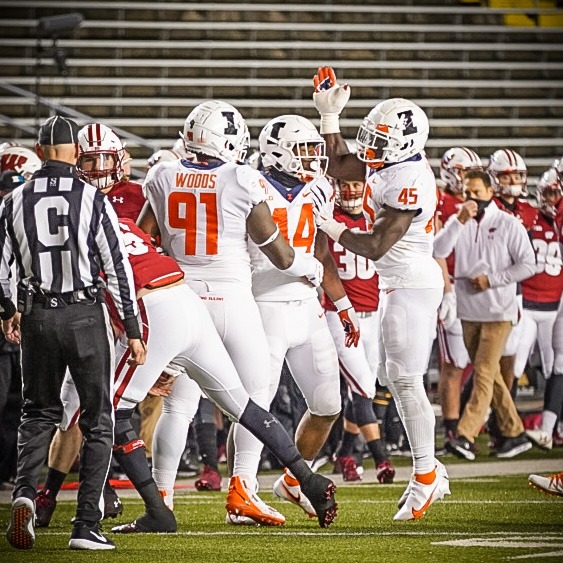 Jamal Woods celebrates with Tarique Barnes during the Wisconsin Oct. 23, 2020. Woods has elected to return to Illinois for a fifth year.

Senior defensive lineman Jamal Woods announced Tuesday on social media that he will be returning to the Illini for a fifth season, taking advantage of the NCAA’s extra year of eligibility granted to all fall-sport athletes.

Injuries have plagued Woods’ career in Champaign, causing him to miss a total of 17 games over the last four seasons. Despite these setbacks, Woods has accumulated a total of 55 tackles, 1.5 sacks and one fumble recovery over 28 career games, though he only made four total tackles during the 2020 season.

“The sights and sounds of Memorial Stadium, exciting wins, and bonds with teammates are what make me who I am today,” Woods wrote on Twitter. “I can’t let that opportunity go by without giving it another shot.

“I’m ready to put the pads back on and get to working on that Big Ten championship we all have been waiting on. I have so much more to bring to Illini nation and I’m ready to give it my all.”