In-state foes Illinois and Northwestern square off again on Thursday 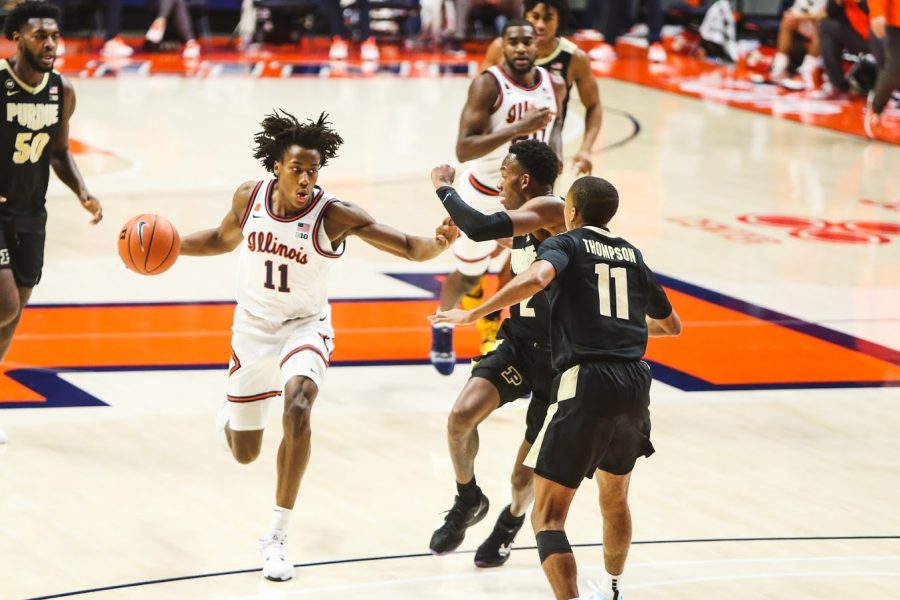 Junior Ayo Dosunmu drives forward during the game against Purdue on Saturday.

Any time two in-state programs face off, that game can typically be considered a rivalry. So when No. 12 Illinois travels 149 miles north to take on Northwestern on Thursday, another chapter in that rivalry will be written.

Since Brad Underwood took over as the head coach of Illinois in 2017, Illinois and Northwestern have had plenty of close games. In the six games since then, Illinois has won four of the six contests. The average margin of victory is 4.6 points, with two of the games going to overtime. Underwood acknowledged that all Big Ten games are tough, but this matchup, in particular, has been as well.

“Two dog fights last year, I don’t expect anything different tomorrow,” Underwood said. “It’s just one of those deals, you can throw out the records … It’s Illinois versus Northwestern. We’re in the same state and compete really hard.”

After being projected to finish towards the bottom of the Big Ten, the Wildcats got off to an almost incredulous start in the Big Ten play, beating Indiana, Michigan State and Ohio State. They jumped as high as No. 19 in the AP poll before losses to Iowa and Michigan knocked them out of the poll.

The Wildcats don’t have a singular star. Rather, they use a collective effort of offensive balance and shooting to score, with four players currently averaging double figures in scoring. The Wildcats make nine three-pointers a game, on 40% shooting from deep, putting them in the top three in the Big Ten in each of those categories. Junior forward Miller Kopp leads the Wildcats, averaging 14.4 points per game on 54% shooting from deep.

“Miller Kopp is a guy that reads situations very well,” Underwood said. “You get above him, he back cuts. He’s got size. He’s turned into a terrific one, two-dribble pull-up guy with range.”

Without a star, Northwestern relies on lots of set plays and off-ball movement to create baskets. With every starter having the ability to shoot, they run a lot of “five out” sets, meaning five players on the perimeter. This is something Illinois guard Ayo Dosunmu has noticed on film.

Dosunmu, a Chicago native, has ties to the Wildcats and head coach Chris Collins. They offered Dosunmu in June of 2016, and he unofficially visited Evanston a few times. Dosunmu ultimately chose Illinois but still has high praise for Collins.

“Coach Collins is one of my favorite coaches who’s not on this coaching staff in the country,” Dosunmu said. “He gets his team playing the game at a high level. He lets his guards go out there and have fun. They play a lot of read and react basketball, so it’s definitely going to be tough on guarding them.”

Illinois will look to make it four straight wins on the season and its fifth straight against the Wildcats. Tip-off is scheduled for 8 p.m. central time and can be watched on the Big Ten Network.