After rough first half, Cockburn responds to criticism well to help thwart Northwestern 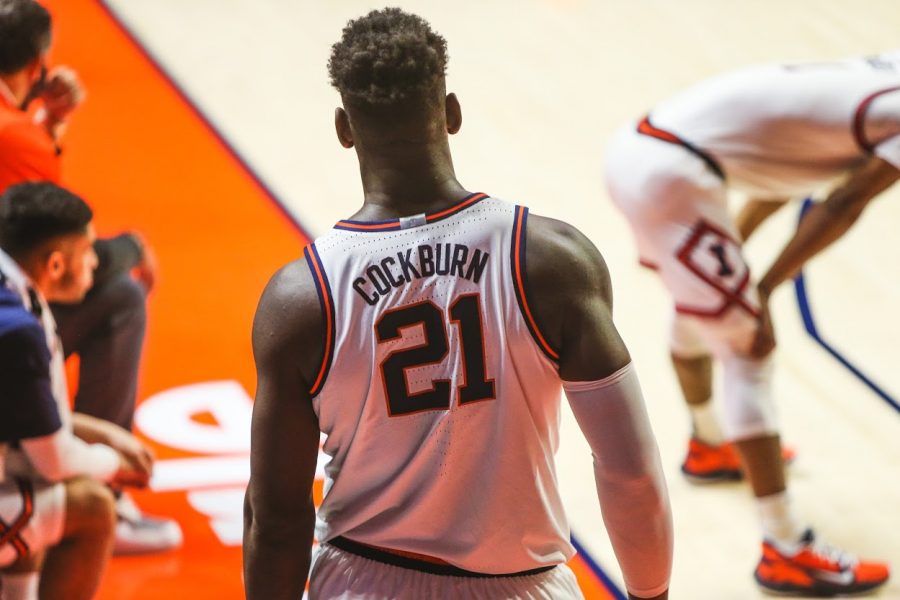 Sophomore Kofi Cockburn walks towards the court during the game against Purdue on Saturday.

In the middle of the first half against Northwestern, Brad Underwood was furious, particularly at star sophomore center Kofi Cockburn. The underdog Wildcats were in the midst of a big run against the No. 12 Illini.

“Giorgi, get him out!” Underwood yelled down his bench to backup center Giorgi Bezhanisvhili, summoning the reserve to replace Cockburn.

At the ensuing media timeout, Underwood lit into his team. He implored them to rebound, focusing his eyes on Cockburn. The tenacious coach slammed his whiteboard into the ground before leaving the huddle. As play resumed, Cockburn took a seat at the front of the socially-distanced bench. Underwood stared back at him, eyebrows scrunched and a cold expression on his face, saying nothing.

Cockburn was having an unusually rough first half. Northwestern’s five-out offense was causing problems for the Kingston, Jamaica native on the defensive end. Offensively, he couldn’t seem to find his groove against the Wildcats 3-2 zone. But what Underwood yearned most from Cockburn was what he berated him about in the huddle: rebounding the ball. Cockburn snagged just two boards in the first half, a big reason the Illini were outrebounded in the first 20 minutes.

“His rebound total wasn’t very good at half,” Underwood said.

Entering the halftime locker room, Cockburn’s teammates tried to motivate him. Bezhanishvilli and Ayo Dosunmu issued words of encouragement. But, it was reserve senior guard Tyler Underwood’s message that stood out to Cockburn. The younger Underwood expressed his confidence in the big man.

“He basically told me, ‘Yeah I know what I’m getting from you this half,’” Cockburn said, recalling Underwood’s speech. “‘You’re going to go out there and put on the most dominant second half in the country.’’”

From there, the switch flipped for Cockburn. A mere 75 seconds into the second half, he grabbed a Da’Monte Williams missed three and finished a layup while drawing a foul. Cockburn immediately turned towards the Illinois and bench, exuding an audible roar. A few possessions later, Dosunmu found Cockburn on a high-low, and he dropped in a bucket to give Illinois its first lead since 12:38 remaining in the first half.

On the ensuing Illinois possession, Cockburn snagged another missed three, this time from Adam Miller. He finished a shot off the backboard and jogged back down the court, flexing his chiseled biceps. Cockburn, once again, looked like the reigning Big Ten Freshman of the Year. After the slow first half, Cockburn snatched 10 rebounds (four on the offensive end) and shot a perfect 6-6 from the field in the second half.

As the final seconds wound down, the mood on the Illinois bench was drastically different than when the clock hit zeroes at the end of the first. Players were up and jubilant. Tyler Underwood walked towards Kofi Cockburn, enthusiastically yelling, “What’d I tell you? What’d I tell you?”

Just mere feet away from where he was benched earlier in the contest, Cockburn and Brad Underwood shared an embrace. At times, the coach was undeniably hard on his star big man, but Cockburn doesn’t mind.

“I knew what I was signing up for when I came to the University of Illinois,” Cockburn said. “Coach expects big things from me. He knows I’m capable of doing great things. Whenever I’m playing mediocre or settle down and think I’ve done enough, he always pushes me to go beyond. It’s always great to have a coach like that pushing you past your limits.”