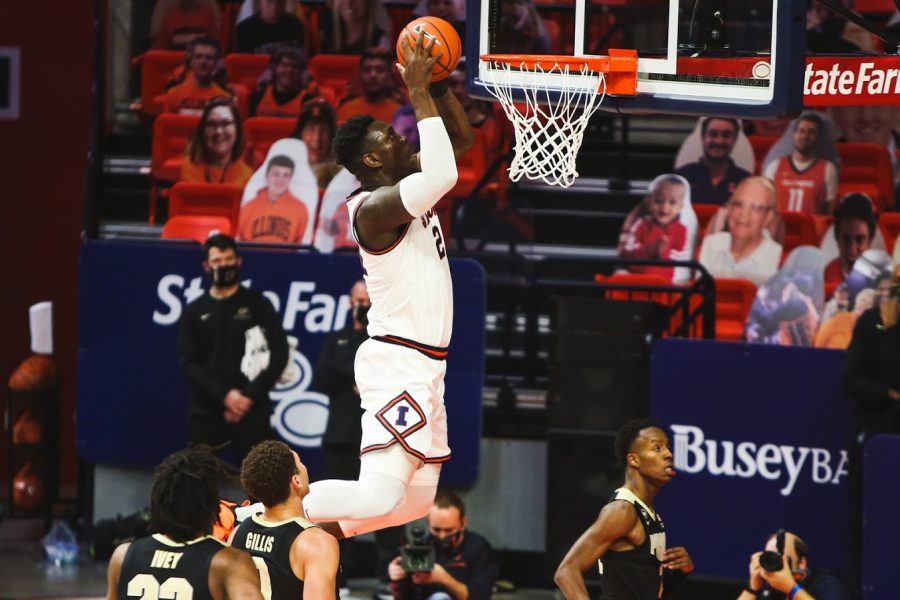 Sophomore Kofi Cockburn dunks the ball during the game against Purdue on Saturday.

Neither Brad Underwood nor Kofi Cockburn has seen or been a part of a second-half like Illinois’ 53-13 domination of Northwestern. After a brutal first half with Illinois trailing Northwestern 43-28, the Illini regained a lead within eight minutes and never let it go.

The entire Illini offense came alive in the second half with eight different players scoring including double-digit performances from Kofi Cockburn and Ayo Dosunmu. But Illinois’ defense kept the Wildcats from sticking around as they shot a mere 8.3% from the field.

Sports cliches are never good but the Illini embodied the phrase “it doesn’t matter how you start, it’s how you finish,” which is why the player grades will focus mostly on the second-half performances.

After scoring just four points on 1-5 shooting in the first half, Dosunmu once again took over the second half to help his team complete the comeback. Dosunmu aided in an early 8-0 Illini run to begin the final 20 minutes and continued to tear up the Northwestern defense, scoring from all over the court. Dosunmu scored 11 second-half points, including two jumpers, a layup, a three-pointer and a pair of free throws.

Dosunmu’s veteran leadership also took over as he did not hesitate to get his teammates involved, dishing out five assists in the second half. Dosunmu was also one of the players who voiced constructive criticism with Cockburn at halftime, motivating the Illini big to up the intensity after the break.

The Illini freshman is finally seeing his shots go in. While attempting the most shots on his team against Northwestern(12) and making just five, each of Miller’s shots looks like it could fall. One of these nights, Miller will finish with 20-plus points. But Miller’s production was still much improved on Thursday as he scored 14 points with four three-point makes.

But what Underwood cares about most from all of his players is defense and Miller was extremely dialed in on that end of the floor against the Wildcats. Miller was switching on screens well, hedging screens and closing out tightly. Even when Miller’s shots weren’t falling his defensive intensity never wavered, something Underwood is loving about his star freshman.

Despite a rough first half all-around, Frazier was one of the more consistent players to start the game, playing the most first-half minutes and scoring five points. Frazier helped push the Illini to a very early lead with a three-pointer within the first couple of minutes. And his production continued over in the second half, finishing with 14 points on three three-pointers and a perfect five free throws on five attempts.

The Illini senior set the tone of a dominant second half early with another three-pointer within 40 seconds out of halftime. Frazier also contributed off the ball, notching three assists in the second half and grabbing two defensive rebounds.

Despite playing with a bit of an ankle injury in the second half, Williams continued to step up with his three-point shot. The senior helped the Illini on a 17-0 run in the second half with a deep ball and hit another after Northwestern attempted stopped Illinois’ big run.

While Williams didn’t score in the first half, he was helped the Illini stay competitive on the glass, recording a team-high four rebounds, with one coming on the offensive end. Despite being undersized, Williams was able to minimize Northwestern’s action in the paint early on with Cockburn struggling to succeed in that area.

At the half, Underwood was disappointed in Cockburn’s lack of rebounding and effort on the glass. After sitting for several minutes before halftime, Cockburn reflected in the locker room with the help of encouragement from Ayo Dosunmu and Tyler Underwood and had a second-half like no other, erupting for 18 points and 12 rebounds with 13 points and 10 rebounds coming in the final 20 minutes.

The Illini big looked like a 7-foot, 285-pound guy, grabbing multiple rebounds and putting the ball up with strong and controlled hands. There haven’t been many games this season where Cockburn was consistently hanging around the basket for offensive rebounds, but that intensity paid off for the Illini on Thursday.

Cockburn’s defense in the second half was also elite, recording a pair of blocks and keeping the Wildcats from scoring anything in the paint. Cockburn’s perimeter defense has also improved as he looked quicker and more agile while playing against Wildcats big man Pete Nance who can excel outside.

While the freshman has had a few flashy games recently, he was a little quieter on Thursday finishing with six points on 24% shooting and committing four turnovers in 19 minutes of action. But Curbelo still did what he does best which is facilitate and find his teammates for open shots.

Curbelo finished the game with a team-high seven assists, now averaging 6.7 assists in Big Ten play. His defense has continued to steadily improve as he has played tighter on the ball, forcing two steals against Northwestern. Curbelo also got involved on the boards, grabbing four defensive rebounds.

While Bezhanishvili played 10 minutes in the first half, he scored just three points and grabbed two rebounds, and turned the ball over twice. He spent nearly the entire second half on the bench, recording just a block in his three minutes of second-half playing time.

His limited minutes in the second half, however, probably had more to do with Cockburn’s dominant performance and high energy than Bezhanishvili’s abilities.

The Illini junior saw an increase in minutes against the Wildcats and he capitalized on those, mostly off the ball. In 12 minutes of action, Grandison scored just three points, but he had two rebounds, two steals and two assists.

Grandison’s highlight from the night was forcing a turnover on defense then hitting a three-pointer on the next offensive possession. It’s clear Underwood’s trust in Grandison is increasing and the junior is beginning to show more confidence in himself.