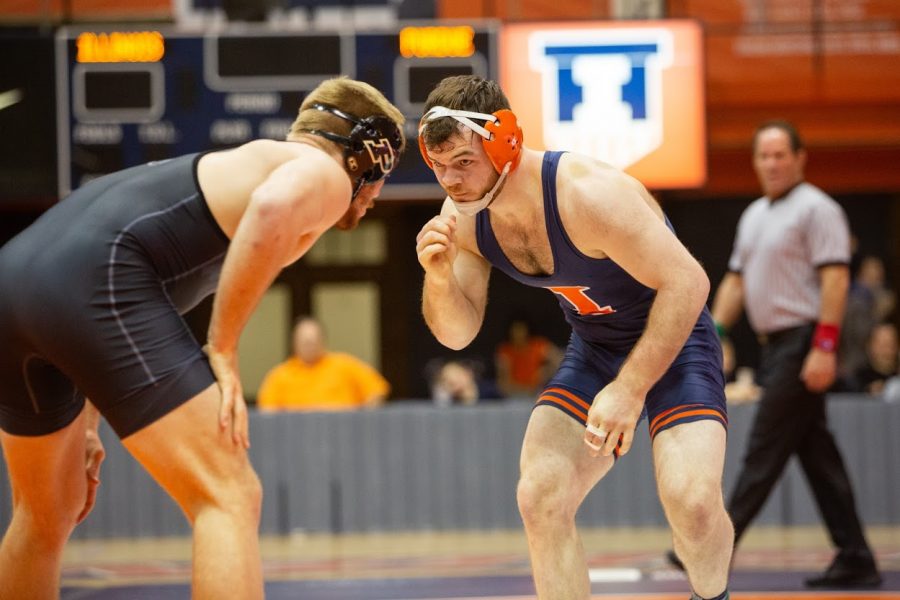 Junior Danny Braunagel sizes up his opponent during the meet against Purdue on Feb. 16, 2020. Braunagel was a NCAA qualifier in the 2019-2020 season.

The Illinois wrestling team will begin its 2021 season this Sunday as it gets set to take on the Indiana Hoosiers. The Illini will travel to Bloomington, Indiana, and will look to secure a victory in this conference matchup. The match will be televised on Big Ten Network at 11 a.m. central time.

Coach Jim Heffernan is entering his 12th season as the head coach of the Illini wrestling team. Senior Jake DiBenedetto said this year the athletes want to make a run at winning it all.

“You have to have the goal of being a Big Ten champion team,” DiBenedetto said. “You just have to go out there and get everyone on the same path.”

It has been difficult to properly prepare for the season with COVID-19 guidelines changing the regular routine. Though practices have been far from normal, the Illini still believe they are ready.

“The situation we have here is a lot better than some other schools and we are very fortunate,” said senior Dylan Duncan on Oct. 14. “I think we’re gonna be well prepared. I think as a university we are taking full advantage of these times and making the best of them.”

DiBenedetto also believes the team is well prepared for the season. He talked about easing into the new routine and how much work the team has been able to put in.

Heading into the 2020-2021 season, the Illini have added seven new members to the team, three of whom will be first-year starters. Five NCAA qualifiers from the 2019-2020 season return as well for the Illini.

One of those qualifiers, junior Danny Braunagel, mentioned that the hardest thing to do was adjusting to the new rules, but he believes the team has gotten over that challenge.

“At the beginning, we were hearing about all these new rules we were going to have to follow and it sucked,” Braunagel said on Oct. 14. “Now, we are all getting used to it and we have settled in.”

The last time these two teams met, the Illini defeated the Hoosier 32-3. Illinois currently leads the series with Indiana with a 49-41-1 all-time record.