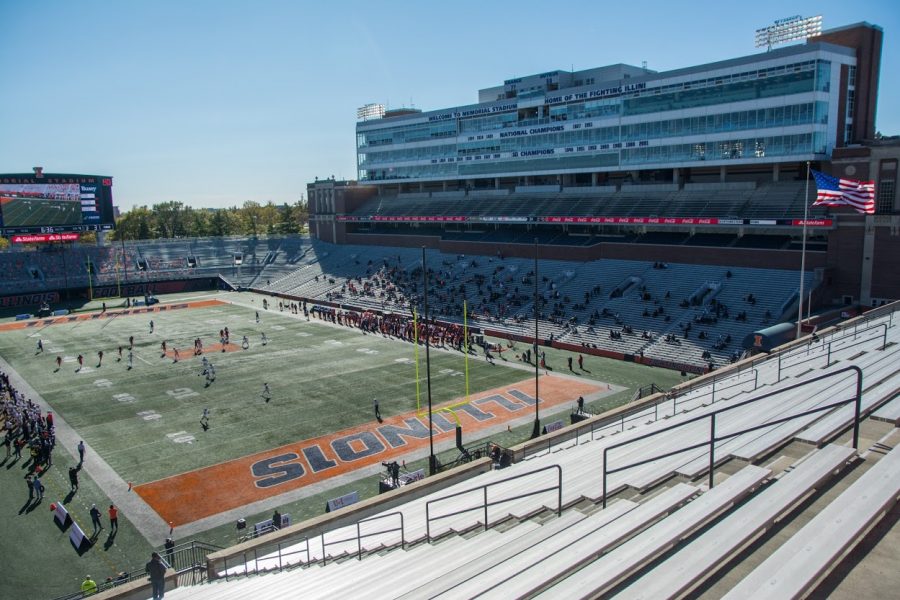 Memorial Stadium rests largely empty during the game between Illinois and Purdue on Oct. 31, 2020.

This year, the tweets on the Fighting Illini Athletics Twitter account have ranged from PSAs telling fans to wear a mask to the latest plays from the No. 12-ranked men’s basketball team.

In a year where sporting events didn’t occur much, the Illini social media staff had to get creative to keep fans engaged.

“Most of the time, we are very engagement-based with our fan base,” said social media strategist Grace Duggan. “So we want to engage with alumni, with potential donors, with recruits, with our fan base to drive ticket sales to reach revenue goals, because it’s important to communicate with our fan base and our constituents and stakeholders, even during COVID-19 whenever there were no events to draw people in.”

Even with no events, folks stuck around.

“We never really saw a follower dip. Our fans stuck with us with content,” Duggan said.

Duggan is the one who oversees the content, but usually it’s a sports information employee who presses send.

Brett Moore, the football sports information director, is the one who “presses send” on the football team’s tweets. And this year, Moore has been kept busy despite the dearth of sporting events.

The football team has witnessed a lot in the last twelve months. First, the spring football season came to a close in mid-March as the pandemic hit. In August, the Big Ten called off the football season before eventually reversing course in September. The season began at the end of October, and by December, Illinois fired previous head coach Lovie Smith and hired current head coach Bret Bielema.

With the events often being a starting point for content, the strategy for how to keep the account fresh during the lull was straightforward.

“There were a lot of different ways we tried to keep ourselves out there,” Moore said. “We produced a ton of different graphics, wallpapers and other things like that, (and) we probably wouldn’t (have) had a chance to do in the past.”

Timing isn’t the only variable in the athletics social media story. Duggan said the athletics department has different strategies for different platforms. For instance, the Facebook base tends to be parents of athletes or potential athletes, whereas Twitter is more timely, so content varies between the platforms.

TikTok has grown over the past couple of years, and the app’s usage has increased exponentially during the pandemic. Illinois Athletics’ first TikTok post was about a year ago.

Though TikTok is a rapidly growing platform, Duggan said Illinois Athletics doesn’t yet have a clear TikTok strategy.

“Our strategy is driven by data, what works on each platform and what we can do to drive engagement and impressions on each platform,” Duggan said. “So we keep the analytics every single month and look at what is working on each platform. So for example, video on Instagram, those numbers have been rising on the men’s basketball platform whenever they’re under 30 seconds.”

Having been on a platform for some time, the athletics department has some insights on what goes viral. Duggan said posts like memes and internet challenges tend to get a lot of traction and engagement.

“Whenever we’re looking at Twitter, you know, it is about engagement, it is looking at what is the new trend, you know, the ‘how it started versus how it’s going,’ that those posts did super well for us,” Duggan said. “So it’s just kind of staying aware of trends.”

As only a handful of sports are actively competing, the social media team has had to collaborate with the teams more to keep fresh content coming.

They’ve turned to sports information directors, coaches and athletes to get ideas, starting in the middle of March and continuing throughout the pandemic.

“We have 10 sports out of our 16 that meet on a weekly basis where we talk about content,” Duggan said. “So we immediately started setting more meetings with our coaches to where each week many sports meet with a sports information director, a coach or a team representative, video graphic design, in myself or my other social media coordinator, and we talked about content.”

Social media isn’t all fun and memes, however.

One major newsworthy event that has happened during the pandemic was the firing of Lovie Smith and the hiring of Bret Bielema as the head football coach at Illinois.

An announcement like that requires much detail and planning. Though Smith’s firing was made public before the official announcement, the social media team had a strategy of how they wanted to communicate the news.

“We had a social media plan of what we wanted to accomplish with this announcement,” Duggan said. “But with that, you know, we had to make the determination: OK, are we linking to the release? Are we just doing a graphic? What are we doing for football? What are we doing for athletics as well as, you know, Instagram, you can link within your caption? So are we telling people, are we driving people to our bio and saying, you know, link in the bio, or are we letting the caption drive home the message enough? So there’s a lot of preparation that goes into it.”

Moore said he and his team got a heads-up about the Bielema hiring the day before it happened and had a little time to solidify the strategy before the announcement came out.

The football social media team broke the news the following day, and Bielema appeared on College GameDay shortly after the hire was publicized.

“We were able to announce it on social and through traditional means,” Moore said.  “So you really try to get the message out there to as many different outlets as possible when the news is that big.”

In a landscape where posts are quite often a form of branding, Duggan said the Division of Intercollegiate Athletics also helps athletes build their brands. You’ve probably seen tweets where the men’s basketball account tags Ayo Dosumnu or Kofi Cockburn after a big play, and occasionally the players drop photos from games on their accounts.

Duggan said every student-athlete has access to game photos through an app called Opendorse. Though Opendorse is predominantly an athlete marketing website that was founded in 2012, the athletics department uses it to share photos with the athletes.

“I upload (photos) to an Opendorse folder. I share those with the student-athletes and the athletes get a text message that says, ‘Illinois Athletics has shared 95 photos with you from Rutgers,’” Duggan said. “They can click on that and they can scroll through and see photos that they can share. So a lot of what you’re seeing on the football, men’s basketball, women’s basketball, student-athletes’ social media accounts are high-quality images that are taken by our photographers, and shared with the student-athletes.”

Though just a handful of teams are competing, there’s no shortage of photographic content to fill social media feeds.

“In about from Aug. 1 to before the Penn State game for Illinois football, we shared over 15,000 images with our student-athletes for the football team. So within about four months, 15,000 photos,” Duggan said.

But beyond photos, the athletes are an integral part of social media strategy. Since the end of the season, at least nine players have announced they’ll be returning to the football program for next year. While it’s pretty routine for players to come back, this year’s announcements have garnered more attention, as the NCAA gave another year of eligibility to fall athletes and Illinois has hired a new coach. But Moore most likely played a role in any tweet you see.

“Guys are texting me their decisions,” Moore said. “I work with them on how they want to publicly announce their decisions, whether it be helping with their statements, providing graphics … anything like that that they want to do. Some guys don’t want to make any public announcements, so I walk them through how we’re going to do that.”

Social media itself is constantly changing and frequent roasts tend to gain traction, particularly on Twitter. Illinois Athletics has dipped its toes in this roast-filled universe but quickly found the water wasn’t to their liking.

After the Illinois football team defeated Nebraska (who, despite being extremely vocal about wanting to play football, finished the season 3-5), the official team account tweeted: “Good game Nebraska. Thanks for bringing back B1G football.”

The tweet was deleted within the hour, but not before it gained national attention. Later, Minnesota would tweet the same thing following the Golden Gophers’ win over the Cornhuskers.

Neither Duggan nor Moore gave any details about what happened with the tweet.

“I mean, it’s just, it is what it is. Everybody knows what happened,” Moore said. “I’d rather not get into the behind the scenes of that one.”