Illini fail to find offensive balance in loss to Maryland 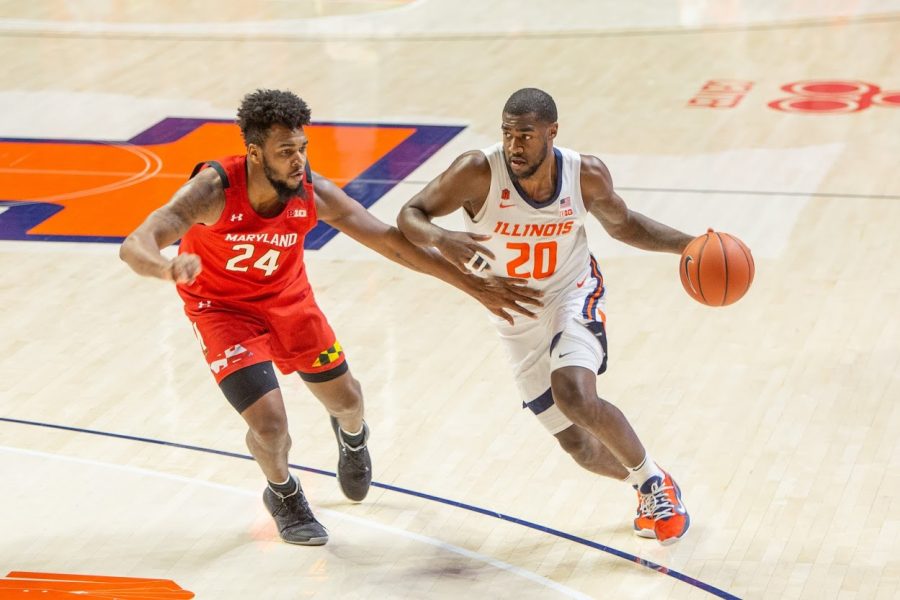 Senior Da’Monte Williams drives forward during the game against Maryland on Sunday.

At times this season, Illinois has looked like a team capable of making a deep run in March.

Against Duke, they used a balanced scoring effort with six players in double figures to win at Cameron Indoor Stadium. In a second half domination of Northwestern, they got baskets from all seven players that played key minutes. In a 27-point thrashing of Minnesota, 10 players scored, with four in double figures.

But that offensive equilibrium that gave them success earlier in the year was nowhere to be found on Sunday night against Maryland. In the first half, the offense revolved around three players: Ayo Dosunmu, Kofi Cockburn and Adam Miller. That trio scored 32 of Illinois’ 34 points heading into the break.

The second half featured more of the same, with freshman guard Andre Curbelo in the spot Miller played in the first half. All 29 points in the second half were scored by Dosunmu, Curbelo and Cockburn. The rest of the team went 0-for-5. Curbelo and Dosunmu took 22 of the 28 second-half shot attempts. Dosunmu is not overly concerned, but he knows the team needs everyone to play well for the Illini to be at their best.

“We need each and every guy,” Dosunmu said. “I think everyone got great looks. … You go through days like that. Our next step is when the ball isn’t going in, what are we going to do on the defensive end.”

Illinois’ usage of Cockburn on Sunday night was bizarre. He was truly dominant in the first half, going for 16 points on 6-for-8 shooting. The Terrapins simply had no answer for him. 6-foot-9 Galin Smith was not tall enough, and seven-foot-two Chol Marial did not have the upper-body strength to battle with Cockburn.

But Illinois did not use that same advantage in the second half. Cockburn took just two second half shots, making both.

“We gotta put him in positions to be successful. One of those things is trying to get him the ball,” Underwood said. “We ran our offense with no pace today. We were really stagnant, looked heavy-legged and almost tired and lethargic.”

An injury to Trent Frazier certainly did not help the lack of scoring versatility. The senior guard appeared to injure his shoulder/collarbone area late in the first half. He did not start the second half but tried to grit through it for six minutes. His only shot attempt was an air-balled three, showcasing he was not 100%.

To get back to that elite level, Illinois will need to utilize Frazier and Miller. When Frazier scores at least 10 points this season, Illinois is 4-1. When Miller scores at least 10 points, Illinois is 6-0. A home loss against an unranked team may raise some eyebrows, but the veteran Dosunmu isn’t overly concerned. He has faith he and his teammates can find that offensive balance again.

“I love my team,” Dosunmu said. “I love where we’re at. I definitely think we can play better. We will play better. It’s just a bump in the road in the journey.”