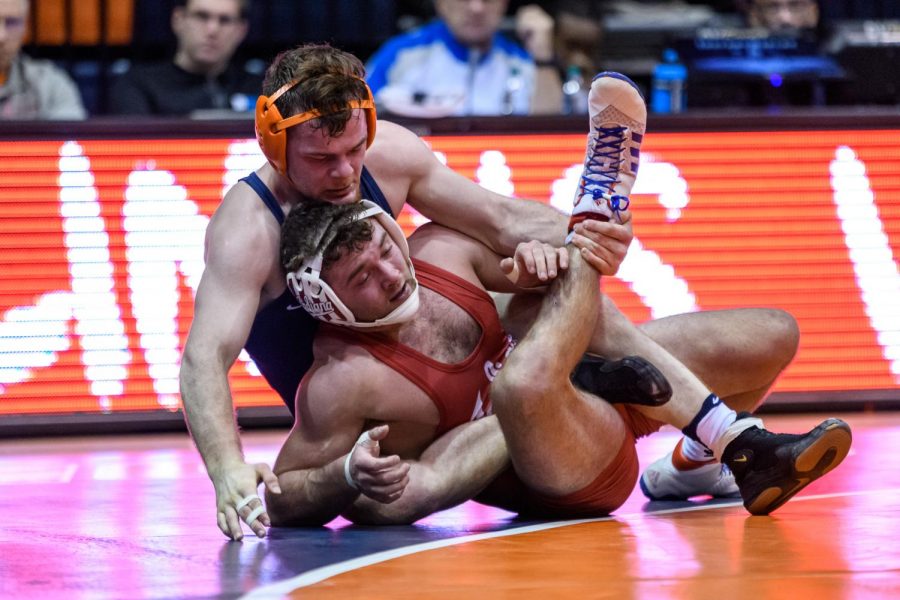 Redshirt sophomore Danny Braunagel pins an opponent at a previous match. Braunagel helped secured the win against Indiana at the meet on Saturday.

The Illini wrestling team defeated the Indiana Hoosiers 39-3 on Sunday, the program’s largest margin of victory in Bloomington in school history. The Illini won bouts in nine out of ten of their matches with the Hoosiers, starting off strong in this conference opener.

Sophomore Luke Luffman was first up as the heavyweights began the afternoon. Luffman secured many takedowns between the two, giving Luffman an 11-3 advantage. This ended up giving the Illini a 4-0 lead to start the match.

Later on, first-year starter Johnny Mologousis had a takedown and took a six-point lead early in the second period. He would give the Illini a 25-0 victory.

Senior Mike Carr, who missed last year to injury, secured a major decision victory and had multiple takedowns which gave him his first victory of the 2021 season.

Redshirt sophomore Zac Braunagel recorded two early takedowns and took a 4-1 lead in the first period. After a quick two takedowns in the second period, Braunagel would secure the fall (6:02) which would give the Illini a 36-3 lead.

In the final match of the day, Matt Wroblewski would win by decision. The win would extend the final score to 39-3, a historic win in Bloomington to begin the 2021 season.

After a lot of hard work during the offseason, the Illini looked strong against the Hoosiers. Redshirt sophomore Danny Braunagel thought Sunday’s match previewed what’s coming this season.

“It’s showing now,” Braunagel said. “That was showcasing how hard we have been working. I’m excited. I think that was the first taste of what we’re gonna be doing this season. I really think we can build on this and continue to just get better and better. We showed everyone the amount of time and effort we have put into this. I am excited to see what we do the rest of the year.”

Braunagel looked strong on Sunday, as he secured the technical fall (6:48) to give the Illini a 30-0 lead against the Hoosiers.

“My game plan is just to keep scoring and finding different ways to put points on the board,” Braunagel said. “If I can keep doing that, I will be satisfied with the way I played personally.”

As for the rest of the season, Braunagel thinks this was a great way to start. Though there were still some mistakes made, he is excited to see how much the team will grow.

“We still made some mistakes and guys were not taking full advantage of certain opportunities,” Braunagel said. “I think this was a good preview of what we are capable of doing. We are capable of competing, and I am excited to see how much we grow and improve throughout the year. This is a great start to the season.”

The Illini will host the Ohio State Buckeyes and the Wisconsin Badgers for a tri-meet on Jan. 17. The start time has not yet been announced.