Player grades: Cockburn dominates in paint, Williams has off night in upset loss to Maryland 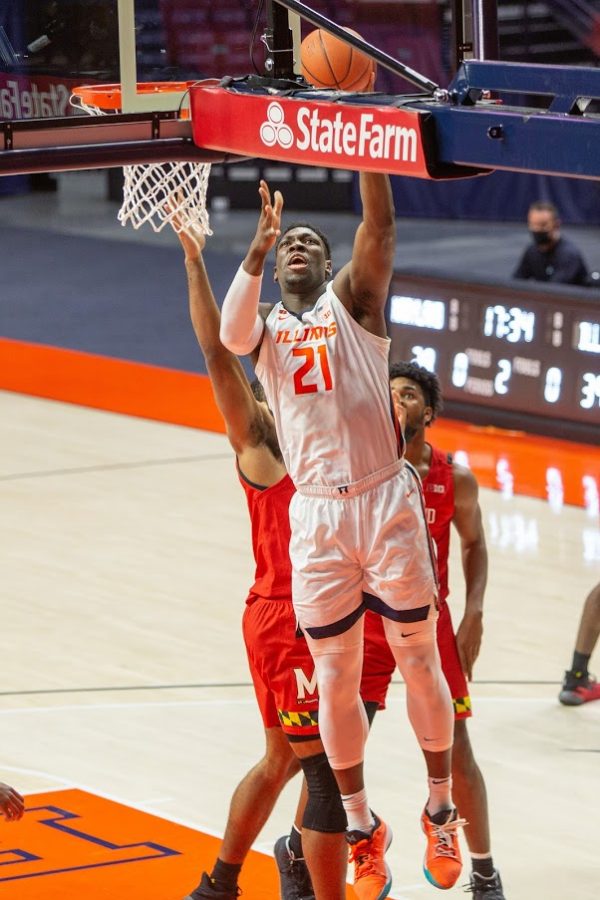 Sophomore Kofi Cockburn takes a shot during the game against Maryland on Sunday. The Illini lost the match 66-63.

After scoring 53 points in the second half against Northwestern on Thursday, it appeared Illinois’ offense ran out of steam on Sunday, unable to produce in the most crucial moments down the stretch in a disappointing 66-63 home loss to unranked Maryland.

Tough losses like this are expected for every team in the unpredictable and competitive Big Ten this season, as conference contenders like Iowa, Wisconsin, Rutgers and Michigan State have all already lost close games to seemingly lower-quality opposition. But losses are harder to swallow with such a tight battle atop the Big Ten standings, especially when defending your home court.

The Terrapins, who entered the game just 1-5 in the Big Ten (the sole win was on the road against Wisconsin on Dec. 28), knew they were capable of dethroning a top conference foe coming into the game and made key shots when they needed to to get the unexpected victory. Let’s take a look at how six Illini played in Sunday night’s loss.

Another brilliant performance from the Jamaica native, finishing with 21 points and 10 rebounds for his ninth double-double of the season. Cockburn shows, night in, night out, that he is one of the top centers in all of college basketball, constantly using his massive frame to brush defenders aside and finish in the paint.

Cockburn also played well on the defensive end, holding Maryland’s starting big man, senior Galin Smith, to just two points. But Cockburn struggled late in the game to use his size and grab rebounds to help get the Illini going on the offense, with a key missed rebound leading to a Maryland three-pointer with under a minute to go.

I’m not saying Cockburn is solely at fault for that missed rebound, but I’m not asking him to get every single defensive rebound. Though that would be nice, this key missed opportunity led to Maryland ultimately taking control and winning the game. The back-and-forth game certainly didn’t come down solely to this missed rebound, but giving second-chance plays for an opportunistic Terrapin offense is always dangerous.

Last season, Ayo was the go-to guy whenever the Illini needed a spark down the stretch. Whenever the ball was in his hands with the clock ticking down and the game on the line, Illini fans knew the Chicago native was going to deliver. On Sunday, Dosunmu didn’t look like his usual self, settling for unnecessarily difficult shots and opting to make things difficult instead of taking the easy option.

Given, he did make some incredibly impressive contested shots to seal upset wins numerous times for the Illini last season. But with Cockburn dominating in the paint all night, deciding to take an ugly contested shot wasn’t the right decision most times.

It’s hard to be too critical, though, as Dosunmu did finish with a game-high 23 points, including 16 in the second half, and helped get things going for a stagnant Illinois offense briefly in the second half. But the decision-making, finishing with three turnovers, and 9-for-23 shooting performance ultimately was underwhelming.

On the defensive end, Dosunmu was tasked with guarding senior Darryl Morsell, who finished with a team-high 19 points. The junior was frequently caught off-guard and out of position, leading to good looks and precious points.

Don’t get me wrong, Dosunmu is an incredibly gifted player and deserves praise for his dominance on the court, which is why he played the entire 40 minutes. But the junior is going to need to step up his performances once the Illini take on fellow top-of-the-conference foes like Michigan, Iowa and Wisconsin, who they don’t face until the end of the month.

After struggling early on in his freshman Big Ten campaign, Miller has looked much better in the last few games, and he added nine points in Sunday’s loss, going 3-for-6 on field goal attempts and 3-for-5 from beyond the arc.

But all nine of those points came in the first half, and he only took two shots in the entirety of the second half. With a hot hand after an impressive 14-point performance in Evanston on Thursday, Miller needed to get a few more looks from three, especially with the offense struggling throughout the game.

Miller also struggled on defense, often getting caught out of position and flat-footed for easy looks, though confidence in his shot is definitely something to build off of going forward in this grueling and unprecedented season.

Like most Illini players, Frazier looked well off his game on Sunday. After playing well at Northwestern earlier in the week, the senior guard finished without a point for the first time this season, though he grabbed a rebound and had five assists.

Frazier did go down with an injury at the end of the first half and left early to get treatment in the locker room before returning briefly in the second half. But the Florida native didn’t look up to speed prior to the injury either, and his sole shot attempt in the second half was well off the mark.

The Illini certainly missed his defensive presence late with the game still up in the air, and the team needs to hope his injury isn’t serious moving forward, as his energy and defense are contagious when he’s on the court.

Tonight was certainly one to forget for Williams, finishing with no points, though he grabbed nine rebounds and dished out five assists. As a defensive-minded player, Williams is typically tasked with guarding one of the opposition’s most dangerous scoring threats.

Tonight was no different. With star point guard Eric Ayala out due to injury, the senior was tasked with guarding sophomore forward Donta Scott for most of the night, who finished with 16 points on 5-for-10 shooting. In a tight game, every point is crucial, and Williams looked weak and second-best for most of the night.

Offensively, Williams was a disaster. Every shot he took was well off the mark, including lay-up attempts that nearly went over the backboard, and his sole three-point attempt — a shot he has relied on all year — never had a chance of going in. Williams needs to put this game — probably one of the worst of his career — behind him.

Early on in the season, I gave Curbelo much more leniency when it came to turnovers and bad decision-making, as he was a freshman and just starting to grow into and understand the Illini system. But the Illini are now 13 games in, and it’s time to increase the expectations just a bit for the crafty Puerto Rico native.

A reduction in turnovers has definitely been an improvement as of late, but poor decision-making and fouls plagued the freshman on Sunday. Due to Frazier’s injury, Curbelo saw much more time, and he did finish with eight points and three assists. But he also finished with four fouls and made a key mental mistake in crunch time in the loss.

Opting to take a contested fadeaway down three with under 30 seconds to play, Curbelo still lacks a bit of maturity, but he certainly has the skills to dominate for the Illini this season and beyond. Once he gets a better handle on his three-point shot and decision-making, Curbelo is bound to be one of the best players in all of college basketball, as he already has the vision and passion to excel in the Big Ten.