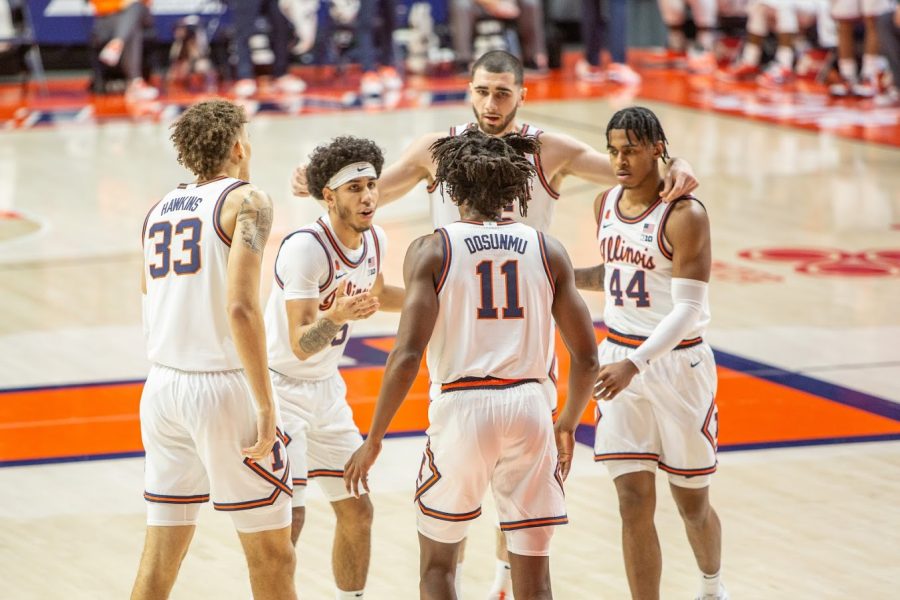 The Illinois men’s basketball team huddles before a play during the game against Purdue on Jan. 2.

The fall semester was anything but normal for University of Illinois students. Take a walk down Green Street on a Friday night, and gone is the buzz of students hustling up and down the street. Academic buildings on weekdays are eerily quiet.

It’s been an adjustment for all students, even the Illinois’ men’s basketball team. Even small things like a team outing to the bowling alley or coach Brad Underwood’s house are a challenge. One positive COVID-19 test within the team can shut them down for two weeks, and hurt their chances at that coveted Big Ten title.

But, the team has found ways to bond. The hobby they enjoy the most together? Video games. Sophomore center  Kofi Cockburn owns a Nintendo Switch. In the offseason, he purchased the games Mario Kart and Super Smash Bros., which the team plays constantly in their apartment. The skill level amongst the players varies.

“I’m the best at Smash. You have Connor (Serven), Brandon (Lieb), they are also really good,” Cockburn said. “Trent Frazier is really good at Mario Kart. He’s been beating me for so long.”

“I suck at the Nintendo Switch, but I play Fortnite with Trent (Frazier), Jake (Grandison) and Tyler (Underwood),” freshman guard Adam Miller said.

“Yes I’ve played, but no I’m not that good,” junior forward Jacob Grandison said. “But, I got better really fast.”

These video game sessions also include card games amongst the team. Junior forward Giorgi Bezhanishvili said they enjoy playing poker and blackjack with each other. They’ll often turn on a college basketball game to get a look at their opponents.

Bezhanishvili also picked up a new hobby over the quarantine period: wood carving. His brother suggested he make a cross, a traditional accessory in his native country of Georgia. After making the cross, Bezhanishvili posted a picture of it on Instagram which garnered support and people messaging him to make more. Bezhanisvhili said he really enjoys it. So much so that he was almost late to a practice.

“I had never been late to anything here,” Bezhanisvhili said. “But one time I was working on it, and I was so into it I forgot about the time … next thing I see we have practice in 15 minutes. I literally got up, got my coat on and started running to practice because I was so in the moment.”

At the practice facility, they find ways to bond as well. Post-practice shooting competitions have become a staple. Sophomore guard Ayo Dosunmu said they play a lot of Horse.

Road trips have also become dramatically different. The team typically travels the day before the game. As soon as they get to the hotel, they are not allowed to leave their rooms, except for COVID-19 testing. They are allowed to get tested 16 hours before the game, so those tests are sometimes administered after 9 p.m. Last season, the team would go to the facility the day before to shoot around. But this year they don’t step foot into the building until game day.

The hotel consists of a lot of downtime. They’ll have team meetings, go over scouting reports, and watch some games from across the country. A lot of the time is spent on their phones, particularly the social media app Tik Tok.

“A few of us get on Tik Tok and laugh,” said senior guard Da’Monte Williams. “From that, laughing so hard, we get sleepy and fall asleep right then and there.”

Even Underwood is finding new ways to pass the time. He developed a habit of taking daily walks over the summer, leading him to lose over 30 pounds. Walking has become a part of his game-day routine, even as the temperature decreased.

“I can put layers on,” Underwood said. “As long as the wind’s not blowing, I’m good.”

This season, interactions between basketball players and students will certainly be less frequent as the top 15 team prepares for a March run. But that doesn’t mean that somewhere in downtown Champaign they aren’t making the most of it with each other.