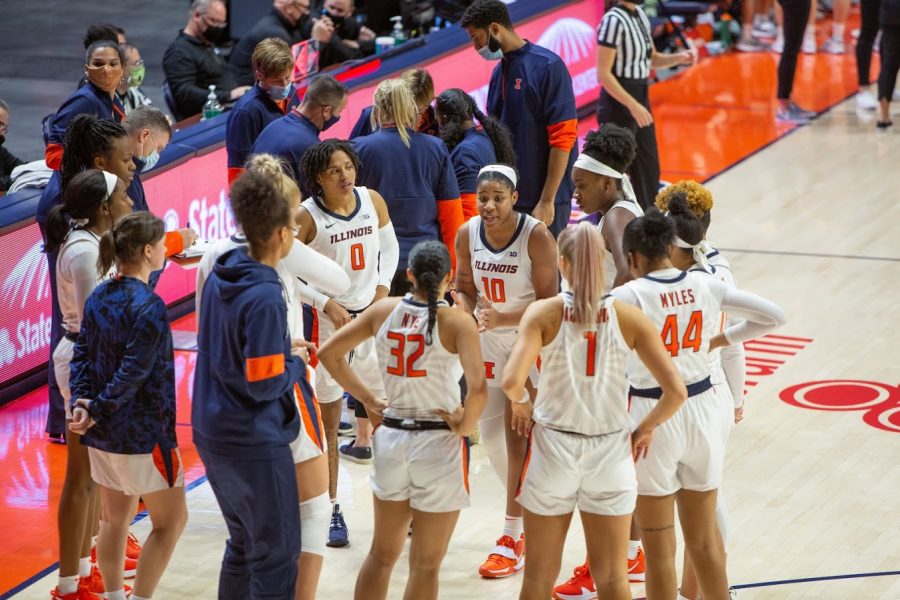 Sophomore Jada Peebles speaks to her teammates during the women’s basketball game against Valparaiso on Dec. 2, 2020. Their upcoming game against Michigan State has been postponed due to COVID-19 concerns.

On Wednesday night the upcoming Illinois women’s basketball game against Michigan State was postponed due to “COVID-19-related concerns within the Spartans program,” according to a team press release. The Illini were expected to play tonight but now have to deal with their third postponement of the season.

The other two came in December when Michigan and Southern Illinois both had to postpone games against the Illini within a matter of days. Despite this now being the third postponement, none of the issues have been from Illinois. The Illini have only had one case reported on the team and it was when sophomore forward Kennedi Myles contracted the virus over the summer.

With that said this could benefit the Illini. Over the last few weeks, the team has been hit with the injury bug. Junior center Geovana Lopes has been ruled out four to six weeks after undergoing surgery on her right knee, and the Illini are missing freshman guards Aaliyah Nye and Aaliyah McQueen. As a result, Illinois was forced to shorten their rotation and essentially play just seven players. In their last game against Michigan, the Illini had four players play over 30 minutes, with sophomore guard Jada Peebles playing the entire game as sophomore guard Jenae Terry and Myles only sat for two minutes apiece.

The Illini will have a week off before they play Northwestern, which will allow them to get some much-needed rest. The postponement will be frustrating for head coach Nancy Fahey since she had been preparing all week to play Michigan State mostly because of their great guard play.

“(Michigan State) is led by a really incredible player in Nia Clouden. She draws a lot of attention, one of probably the best mid-range jumpers and explosive in full-court players in the league,” said Fahey. “I think that they also have a nice compliment of perimeter players, they run a bit of a smaller lineup, which doesn’t really surprise me because there’s guards handling the ball a lot.”

This is Michigan State’s second game that has been postponed which begs the question: when will this game be made up? It looks like a tough question to answer because both teams have to make up multiple games and their respective schedules do not allow much wiggle room. The Spartans have an opening in the middle of February when they have an eight-day layoff between games, but Illinois plays two games within that window.

There will likely be two possible outcomes for these postponements. The Big Ten may push back their conference tournament to allow for games to be made up, or these games are eventually canceled.