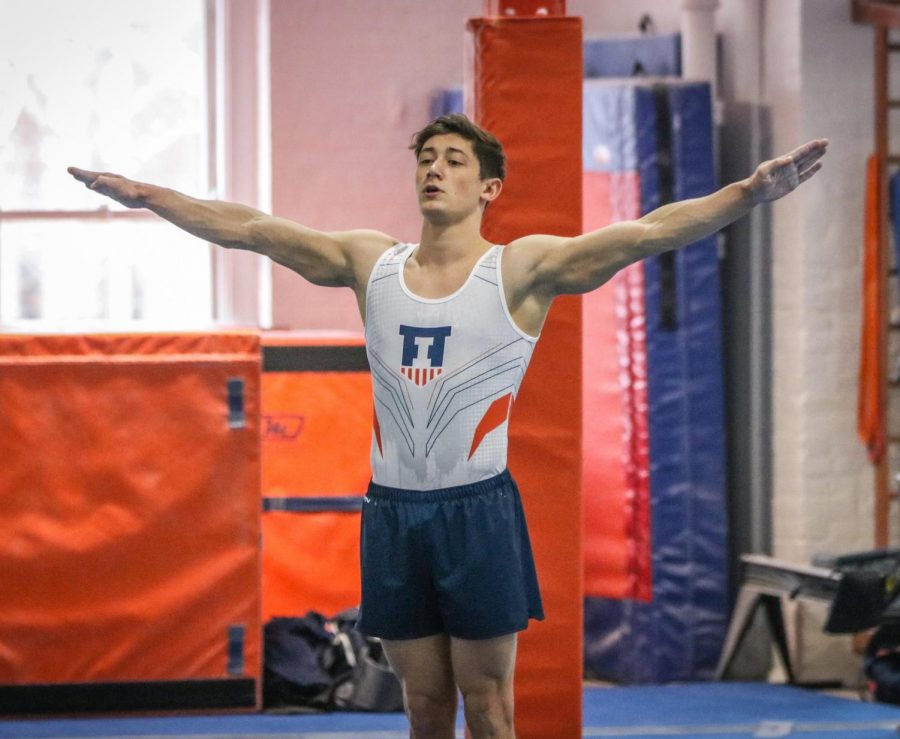 The Illinois men’s gymnastics team will start its 2021 season not only a week earlier than originally scheduled but in a revolutionary new way. Illinois will face Northern Illinois tonight in a first-of-its-kind virtual gymnastics meet.

Upon releasing its 2021 Big Ten schedule on Jan. 4, the team clarified that all meets against Big Ten opponents would be held in person and in one venue. However, the team left open the possibility of scheduling meets against nonconference opponents that would be conducted through virtual means and with the teams in separate venues. Tonight’s meet will be the first virtual meet in not just Illinois’ program history but in the history of American gymnastics.

Both teams will compete in their respective practice gyms — Kenney Gym in Urbana and NIU’s Gymnastics Training Complex in Dekalb — with a live stream of the gymnasts’ performances for the judges to score offsite, for the teams to watch in the gyms and for the fans to watch from home.

Competing in Kenney Gym as opposed to Huff Hall, and competing without the physical presence of fans, judges or another team is going to make the competition different in several ways, both positive and negative, according to head coach Justin Spring.

“Get some gamers in a competitive environment, when another team is right there, we have guys that will game up. For those guys, this is going to feel a little too much like another day at practice in the gym,” said Spring. “However, being able to compete on your practice equipment that you trained on consistently for the last several months, there’s certainly an advantage there. We know our gym. We know everything about our place. We’re there every day.”

Illinois enters the season ranked No. 4 in the nation by Road to Nationals and No. 5 in the College Gymnastics Association’s preseason coaches poll, comparable to where the team started the 2020 season in the rankings. This first meet against a nonconference opponent like NIU is meant to be a tuneup to get the team ready for the more competitive and more important conference meets which begin next weekend against Ohio State.

“We’ll have some high points and we’ll have some low points. I’m certainly not looking for a lasting season-high by any means,” Spring predicted for the meet. “It’s really just a way to test the guys, see what’s working and see if we need to tweak any routines before next weekend.”

A tentative lineup released by the team yesterday for tonight’s meet reveals that several of Spring’s gymnasts would reach significant milestones if the lineup holds. Freshman Logan Myers and graduate transfer Léo Valentin would make their collegiate debuts while junior Michael Fletcher would make his return to competition nearly 17 months after tearing his ACL. After sitting out the entire 2020 season to heal and recover, the all-around gymnast would pick up where he left off and compete on all six events tonight.

“I’m so excited to be back in Huff Hall and to get through a great routine and stick the landing,” Fletcher said in October. “Freshman year, those were my favorite moments, and I can’t wait to get back there. I’m more excited than anything else just to get back to competing for Illinois again.”

While it will be another week before Fletcher is competing in Huff Hall, he will finally be able to compete for Illinois tonight.

After 10 long months of offseason and adhering to strict team coronavirus protocols, the pressure and stress was starting to get to the team. According to Spring, it was building “like a pressure cooker,” which prompted him to call a team meeting yesterday to vent some of that pressure and get them mentally prepared for tonight.

“We had to have a meeting and say ‘Look, you guys have been amazing. You’ve been focused, you’ve been committed. Let’s remember why we wanted to do this and let’s have some fun,’” said Spring. “They’re college students not living a college experience at all. They’ve adhered to the system, they’re staying in their apartments, and it’s driving the guys crazy. So we just had to loosen our grip a little bit.”

Spring saw the visible release of the pressure in his team after the meeting concluded.

“You could almost see everyone just take a sigh of relief walking away from that meeting. They will be very excited to get in the gym, have fun, and show off what they’ve been locked down for and committing to for the last seven months. I think we’re going to see a very excited team.”