No. 22 Illinois women’s gymnastics opens season with win at Nebraska 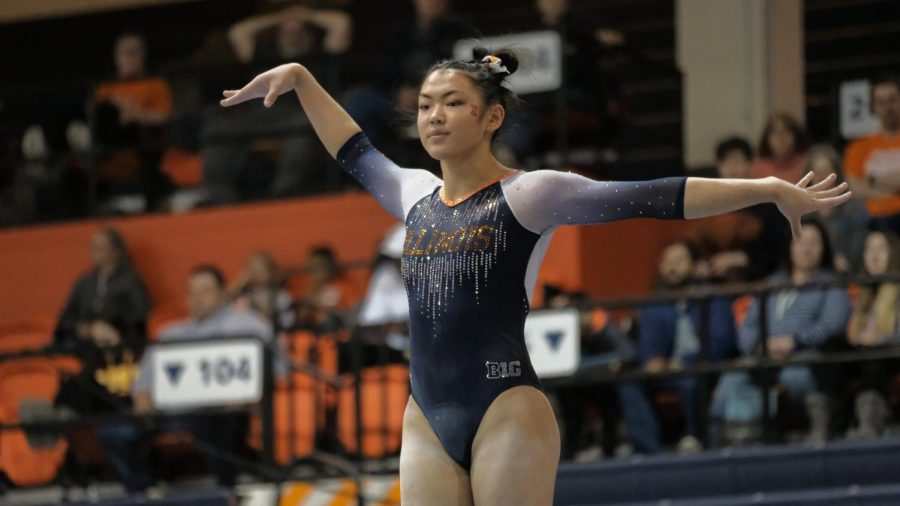 Mia Takekawa poses during a meet against Central Michigan on March 1.

“Our team chemistry was amazing; they were totally united and that really set the tone for us,” said head coach Nadalie Walsh. “I’m really proud of them and I think they did a great job, they essentially kind of captivated the whole arena. They walked in with confidence, and they did what they could do and they did it well and the results are speaking for themselves.”

The only event Illinois individually fell short on was beam, as Nebraska junior Kynsee Roby won with a score of 9.875. The Illini’s highest score on the event was a 9.825 by sophomore Mia Townes.

Three freshmen debuted for Illinois, as Ewald, Amelia Knight and Abby Mueller all competed in multiple events. Ewald had the surprise of the night with her exceptional 9.900 on bars.

During the preseason senior Nicole Biondi and sophomore Mia Takekawa were selected by the conference coaches as gymnasts to watch this season.

Biondi competed in one event, scoring a 9.725 on bars, which was seventh out of twelve overall and fourth out of six on Illinois.

“Just continue to be extremely grateful for every moment and every opportunity. When we go back into practice, zero in on the little details that we want to adjust,” Walsh said. “We don’t need to reinvent the wheel next weekend, we just need the rest of our lineup to be healthy and to go back out there and do the same thing we did today, just better.”

Illinois travels to Piscataway, New Jersey, to take on Rutgers Jan. 23 in the team’s next meet.