Curbelo looks to find his rhythm against former teammate 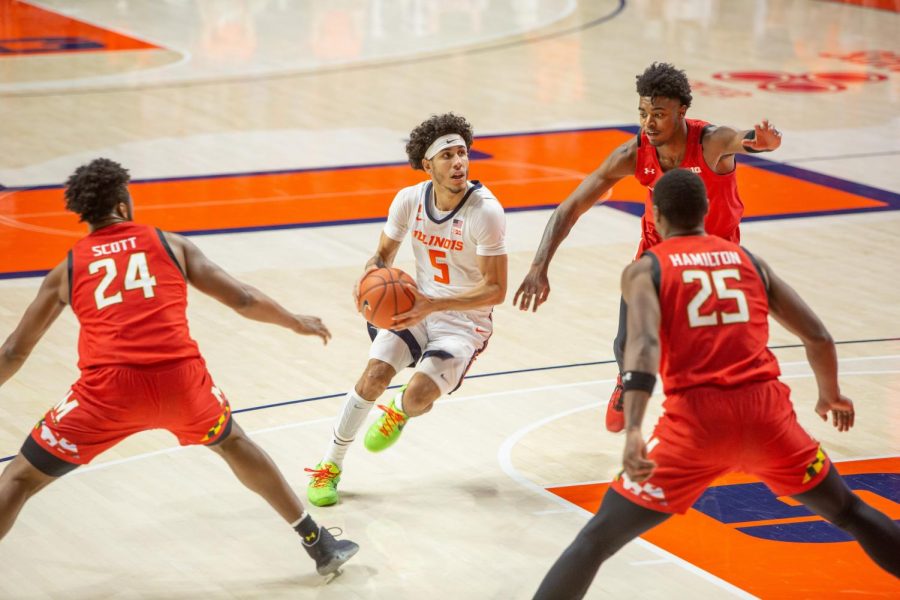 Andre Curbelo drives to the hoop in Illinois’ game against Maryland last Sunday.

After one of his more disappointing halves of the season, Andre Curbelo didn’t waste much time getting back to work. Mere minutes after the Illini’s 66-63 loss to Maryland, Curbelo was back on the court at the State Farm Center to get shots up.

Curbelo had just shot 4-for-12 from the field and 0-for-2 from three, so here he was getting more reps up. No manager to rebound. Just Curbelo, the ball and the rim.

“I just kinda went out there, took shots from the spots I was struggling with a little more,” Curbelo said. “But mostly I was just trying to be out there. … Having a tough loss like that, I wanted to go out there and just flush it. At the end of the day, I want to get my mind right.”

A big reason for Curbelo’s struggles is how Maryland defended him. On ball screens with Curbelo as the handler, the Terrapins went under, daring Curbelo to shoot. On his drives, they stayed attached to their man, not allowing Curbelo to get off some of his signature assists. He finished with three assists, his lowest total since early December.

Illinois will need Curbelo to find his stroke moving forward if teams are going to use the blueprint that Maryland used. But head coach Brad Underwood is not too worried about his freshman point guard.

“If anybody wants to go under him, good luck,” Underwood said. “There’s a lot of counters to that. You flip the screen, you re-screen it. We’ve got to do a better job of changing the angles of our screens. But Andre Curbelo with space, that is a real problem. You pick your poison in how you want to guard him.”

Saturday’s matchup with Ohio State features another interesting storyline for Curbelo. His high school teammate Zed Key is an important piece for the Buckeyes. After playing together for years with Long Island Lutheran and in AAU, the two friends are now opponents.

“Since I came here, I’ve been playing with him together,” Curbelo said. “A lot of emotions getting to see him again. Haven’t seen him ever since we graduated and ever since I left to come here. I think it’s gonna be great, great to see him. Hopefully we can chat a little bit.”

Key is a part of a versatile Buckeyes frontcourt with sophomore EJ Liddell and senior Kyle Young. The Buckeyes are in the top-45 nationally in rebound percentage. This isn’t Chris Holtmann’s best team in Columbus, but the Buckeyes have shown they are capable. They trail the Illini by just one game in the Big Ten standings at 4-3.

Underwood has had difficulties beating Ohio State in his Illinois tenure. After a 71-63 loss last season, Underwood moved to 1-3 against the Buckeyes. To get back on the right track Saturday, Illinois will need to get everyone involved and that starts with Curbelo.

Tip-off is scheduled for 11 a.m. central time and can be watched on Fox.