Slow start finally catches up to Illini, dooms them against Buckeyes 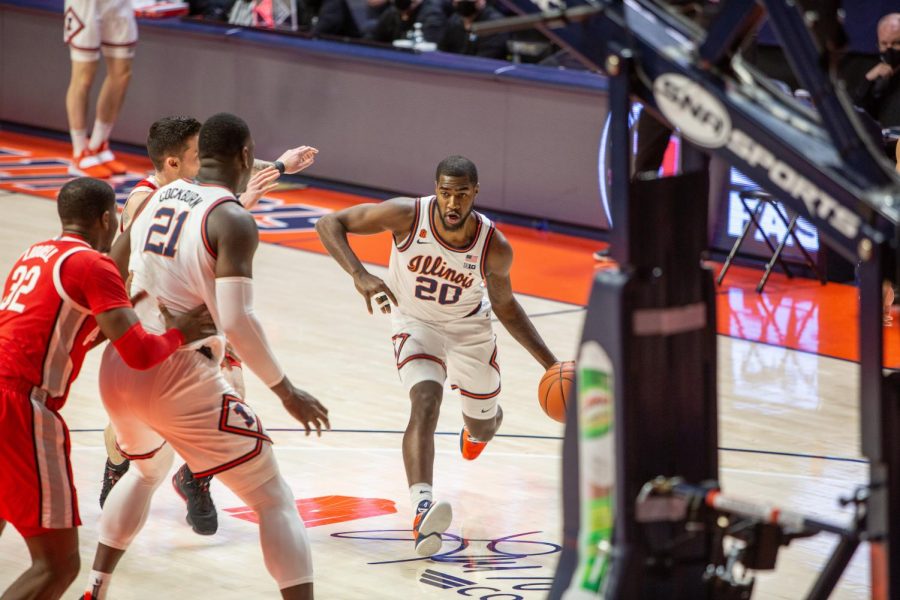 Da’Monte Williams drives to the lane in Illinois’ game against Ohio State Saturday. The Illini fell 87-81.

For Illinois, it was a familiar situation. A slow start put them in a second-half deficit. Most games this year, whether it be at Penn State or at Northwestern, Illinois has been able to dig themselves out of that hole.

But on Saturday, those early struggles came back to haunt them. The Illini battled in the second half but ultimately ran out of time, falling to the Ohio State Buckeyes, 87-81.

“I’m getting really frustrated with really poor, lack of emotion, non-competitive starts,” Underwood said. “You can’t come out of a locker room and come out of a pre-game huddle and be down 9-2.”

The first half was a disaster for Illinois. The Buckeyes jumped out to a 10-2 advantage, but Illinois rallied to tie the game at 15 on a transition three from Jacob Grandison. From there, it was all Ohio State. The balanced Buckeyes embarked on a 15-0 run. They got an outside jumper from Seth Towns, then a three-pointer from Meechie Johnson. EJ Liddell then took over with a mini 8-0 run. The Belleville, Ill. native came into the game with three makes from deep on the season and he proceeded to hit three in the first 11 minutes of play on Saturday. The Buckeyes finished the half shooting  53.1% from the field and 7-13 from deep, led by Liddell’s 13 points.

While the defense was concerning, Illinois also struggled to rebound the ball effectively. The Buckeyes didn’t play anyone as big as Cockburn but used their long and athletic wings to corral the ball. The Buckeyes outrebounded the Illini 20-11 in the first half, in large part due to the efforts of Liddell, Towns, Justice Sueing and freshman Zed Key. Illinois forwards Jacob Grandison and Giorgi Bezhanishvili failed to grab a rebound in the first stanza.

The second half started much differently. The Illini played with more energy on defense, converting to some easier buckets on offense. They started the second half seven of nine from the field and cut the lead to single digits, 56-48. After a Duane Washington flagrant foul, Illinois got two free throws and the ball and a chance to cut the lead to four. But Cockburn missed both free throws. Ohio State got a stop, and immediately went on a 6-0 run, led by a Justin Ahrens three and a Towns-and-one, and the lead was back to 14.

“It’s just one more level we can reach of talking more, being in that gap a little bit more,” Adam Miller said of his team’s defense. “When that ball is in the air, get to your man on the flight. Just little things.”

Illinois crawled back with some more intensity down the stretch, but it was too little too late. A Miller three cut the lead to 83-81 with 15.5 seconds left. But Washington stepped up the line and calmly drained two free throws. The Buckeyes got a stop, putting the final nail in the coffin.

For Illinois, they seemed to have success working it inside. Cockburn and Bezhanishvili finished a combined 11-13 from the field for 24 points. But Cockburn struggled passing out of the double-teams and from the free-throw line going 1-5.

The loss puts Illinois at 5-3 in conference and in fifth place. With a tougher part of their schedule upcoming, this is a crucial point in the season for Illinois.

“We have to stop riding the emotional roller-coaster that is this team right now,” Underwood said. “And it’s frustrating. I wish I had the exact answer. We’re going to have some very tough meetings.”