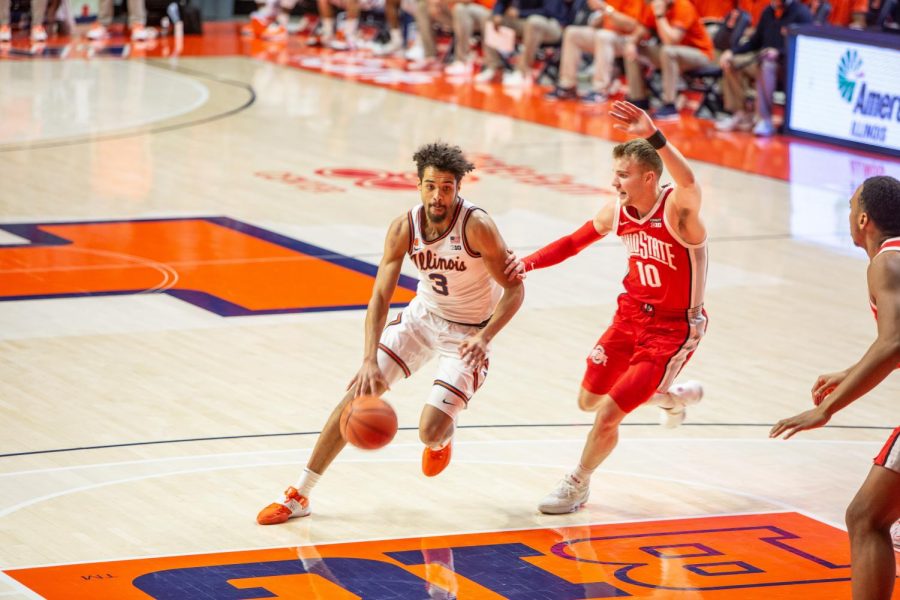 Jacob Grandison dribbles by an Ohio State defender in the Illini’s loss to the Buckeyes on Saturday.

There was going to come a time Illinois wouldn’t be able to dig itself out of a massive halftime hole. That day came on Saturday, as Ohio State walked into State Farm Center with enough swagger and energy to hand Illinois its second straight loss. While Brad Underwood praised Ohio State for their play, he cited a lack of intensity and emotional control from his team as the reasons for the loss.

Coming out of the half down 15, the Illini got within six points just six minutes into the half and were primed to shift the momentum after the Buckeyes were called for a flagrant 1 foul. Instead, Illinois missed two free throws, turned it over and let Ohio State go on a 10-2 run. That lack of discipline and togetherness cost the Illini a comeback win.

While Ayo Dosunmu and Kofi Cockburn both put up solid statlines, no one was able to step up and take control late in the game. But let’s take a look at eight Illini performances.

Dosunmu came close to taking over the game, scoring 18 points in the second half after putting up just four in the first half. Dosunmu kept the Buckeyes from ever running away with the game by making nine of his 10 free throw attempts in the final 20 minutes.

The junior was also seeing the court well, dishing out a team-high five assists while securing two steals on the defensive end. While Dosunmu kept things close late in the game, he ultimately couldn’t pull the Illini ahead. But with the lack of consistent defensive stops from the Illini, there wasn’t much Dosunmu could really do on the offensive end to complete the comeback.

While Dosunmu likes to save his heroics for the end of games, the preseason All-American needs to start showing his dominance early on to keep the Illini away from these attempted comebacks.

While Miller didn’t put up career-best numbers, Saturday’s game might’ve been one of his best for the Illini. After a couple early misses, Miller made three three-pointers and made all three free throw attempts, finishing with 14 points.

But Miller’s advancements on defense and willingness to make the hustle plays were the most important area of his performance. Miller was one of the only Illini who showed high energy from the start of the game to the end, consistently being in the right place to make a defensive stop and taking the extra step to disrupt Ohio State’s offense. The freshman helped in the paint against the Buckeyes too, grabbing seven rebounds, the second-most on the team.

If Miller can keep gaining confidence from the perimeter, he will be a dangerous and much-needed piece for the Illini come tournament time.

Coming off a shoulder injury sustained against Maryland, Frazier looked solid against the Buckeyes, particularly on the defensive end while guarding Duane Washington Jr. He held Washington to 11 points on 30% shooting and consistently forced tough shots or passes from Washington.

Frazier was also effective on offense, scoring eight points, including two three-pointers. The senior had four assists and only one turnover while also notching two steals on the other end. Frazier did seem to hesitate and pass on some potential three opportunities, which could be an injury thing or a confidence thing. Either way, Frazier will need to show his comfortability taking those shots as the Illini still search for a consistent deep threat.

Despite one three-pointer, Williams was very quiet against the Buckeyes, scoring just three points on four shot attempts. Williams played an unusually low 21 minutes on Saturday, however, as he was benched just two minutes into the first half and only returned for another six early minutes.

Williams also wasn’t as effective on the defensive end against the Buckeyes, grabbing just two rebounds. The senior was one of the Illini who didn’t have much initial energy which was exposed early on by the Buckeyes.

By now it’s obvious Cockburn is going to notch a double-double almost every night, but that doesn’t mean his performance was a success. Cockburn put up 15 points, making all seven of his shot attempts and grabbed 11 rebounds. However, Ohio State challenged Cockburn more than any team all season.

The Illini big’s defense was subpar, as he couldn’t figure out how to guard E.J. Liddell, who finished with a career-high 26 points. While Cockburn’s perimeter defense looked to be moving in the right direction lately, he was not quick enough for Liddell, often leaving him to take open threes that he consistently hit.

Cockburn was visibility frustrated the entire game, making just one of his five free throw attempts and often letting the ball get ripped from his hands or failing to come down with rebounds.

After a tough outing against Maryland, Curbelo looked to bounce back against the Buckeyes and his former high school teammate Zed Key. Instead, the freshman had another inefficient game while Key helped Liddell frustrate Cockburn.

Curbelo played just 12 minutes, scoring two points with two assists and two turnovers. His passing hasn’t been as crisp lately and teams are finding ways to guard Curbelo off screens, which he hasn’t found a way to counter yet.

The junior had a couple of high points on Saturday, using a couple of hook shots to help the Illini tie things up at 10 after being down 10-2 early in the game. He also completed an and-1 play in the second half as the Illini tried to crawl back from the 15-point deficit.

And while Bezhanishvili brought some energy to the court early in the game, that faded as time went on. He began to struggle on the defensive end, like Cockburn, finishing the game without grabbing a rebound or any big defensive play.

Much like Miller, Grandison played his best game with the Illini against the Buckeyes, as he looked confident and poised, scoring eight points on two three-pointers. He played well off the ball as well, dishing four assists and registering one block, which came after he missed a shot on the last offensive possession.

Grandison brings much-needed length and quickness to the Illini defense and has proven he is a hard worker and is consistently improving. It might not be surprising if Grandison gradually earns more minutes late in the season.