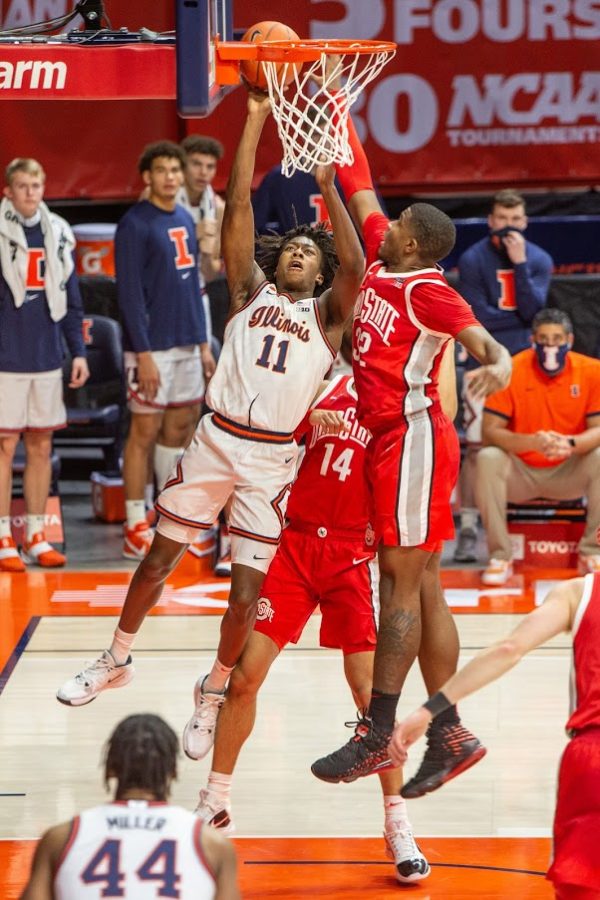 Ohio State Sophomore E.J. Liddell attempts to block a layup from Junior Ayo Dosunmu during the game against Ohio State on Saturday,

Early in the first half of Saturday’s victory over Illinois, Ohio State sophomore forward E.J. Liddell started to feel it.

First, he caught the ball at the elbow, squared up, and hit a mid-range jumper over Illini center Kofi Cockburn. On the ensuing Buckeye possession, Liddell stepped into a three from the top of the key and — without hesitation — knocked it down.

But Liddell wasn’t done. On the next Buckeye possession Liddell fired a three NBA range with the shot clock winding down and drained it. Illinois could only watch as the Buckeye big man went on a personal 8-0 run, to cap an Ohio State 15-0 run. The last make was Liddell’s third three of the half. He came into the game with three makes from deep on the entire season.

“He’s a really good player,” Illinois head coach Brad Underwood said. “He hasn’t been an overly productive three-point shooter coming into this game and today he jumps up and makes four … you put your hand down against a good player and don’t put your hand up and challenge him? He’s gonna bust your tail.”

Liddell finished with a career-high 26 points. If that seems familiar to Illinois fans, that’s because the last time these teams played, Liddell scored his then career-high 17 points. He averages a career 8.8 points per game, but that number skyrockets to 21.5 against the Illini.

Liddell, a Belleville, Illinois, native was almost an Illinois commit. He was the first two-time Mr. Basketball winner since Jabari Parker, edging out Ayo Dosunmu in 2018. He had Illinois in his final three with Ohio State and Missouri. Underwood was pushing for him hard, looking for that dynamic Liddell and Kofi Cockburn front-court pairing. Even though Liddell was almost an Illini, that’s not what inspires him to play well.

“It’s my home state school, but that’s not what motivated me today,” Liddell said. “It was my teammates. I felt like I needed to do more. I didn’t really have the best game against Northwestern … but today I felt like I did everything I could for my teammates.”

As well as Liddell played on offense, it was his defensive work against Cockburn that helped propel Ohio State. Despite a size disadvantage, the six-foot-seven Liddell held his own against the 7-foot Cockburn. Cockburn made all of his field goals, but his seven attempts were his third-lowest total of the season.

“Kofi is a massive dude,” Liddell said. “He gets position well, he’s really good. I felt like our focus was more on the defensive end, not the offensive end. I feel like we did everything to get stops.”