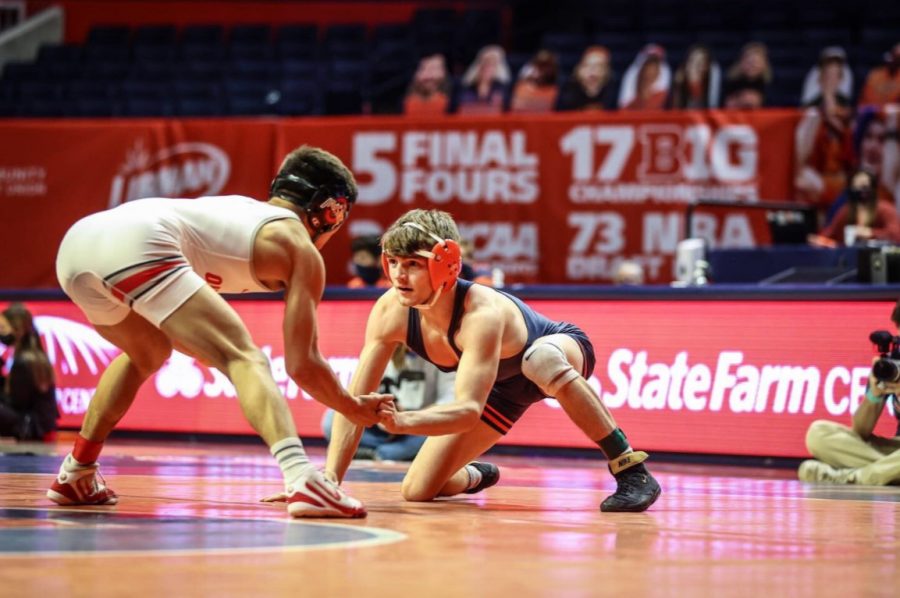 Redshirt Sophomore Justin Cardani grapples with his opponent during the tri-meet with Ohio State and Wisconsin on Sunday.

The Illini wrestling team came out on top in Sunday’s tri-meet at the State Farm Center, defeating the Wisconsin Badgers 21-9 and the Ohio State Buckeyes 18-15. The Illini move to 3-0 on the season as they continue their strong start.

“I think we performed really well,” Byrd said on Sunday. “There was a little scare with Wisconsin near the end, but small hiccups always happen in wrestling. It’s just one of those things.”

Byrd secured two victories in both of his matches on Sunday, as well as four other members of the team. Sophomore Luke Luffman, one of the four, defeated two top ten ranked wrestlers in his two matches; Wisconsin’s No. 5 Trent Hillger and Ohio State’s No. 6 Tate Orndorff.

Freshman Danny Pucino tackled two victories in his Illini debut. Pucino won both of his matches by decision, which helped close both wins.

Matt Wroblewski grabbed a huge overtime win against the Badgers, which became the second win of the day for him. The 197-pound redshirt junior took down Wisconsin’s Andrew Salemme which gave the Illini an 18-9 lead heading into the last match against the Badgers.

Leading up to Sunday’s meet, Byrd knew that the team had to be ready for anything. He was also frustrated with the level of respect people were giving to the Illini.

“It sucks when you come in every day at practice knowing people don’t give your team respect,” Byrd said on Sunday. “We know what level we can compete at and how good we are, but other people just don’t see it. It’s frustrating, but it fuels us to win.”

Now that the Illini have defeated two more strong conference teams, Byrd hopes that this team will be looked at differently.

“We have to show up and wrestle because anything is possible,” Byrd said. “But we are way better than what people think we are. It is really frustrating to see Ohio State ranked seven or eight and Wisconsin is 21 and we’re back at 25. We are a young team, but we are a really good group of guys. I want people to see that.”

The Illini will look to remain perfect as they take on the Purdue Boilermakers at Huff Hall on Friday. The start time has yet to be announced.