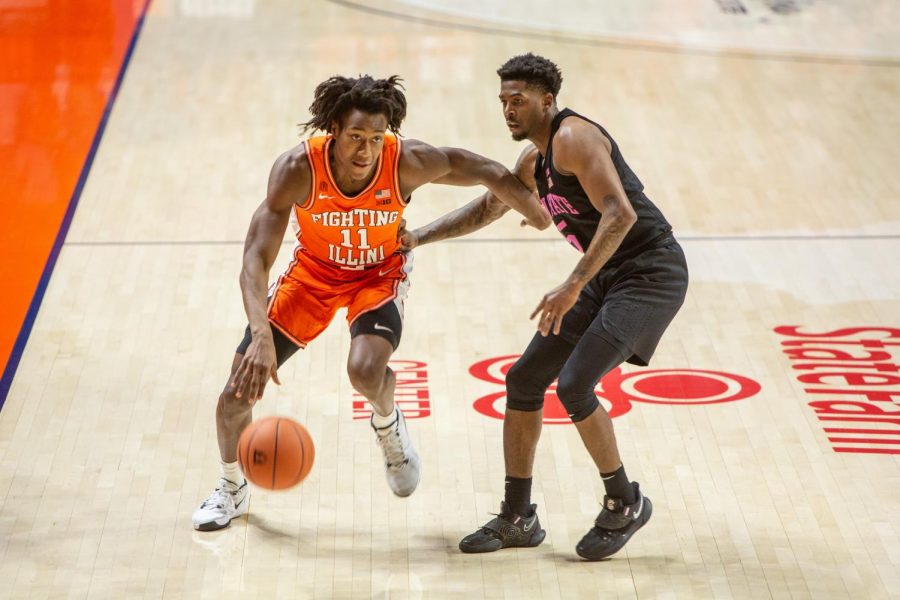 For an Illinois team on a two-game losing streak, the group needed an early spark. After lackadaisical starts in their past few games, something needed to change.

That first-half energy they had been missing was rediscovered on Tuesday against Penn State at State Farm Center. They got out to a 14 point lead at halftime and never looked back, beating the Nittany Lions 79-65.

“Everybody contributed tonight,” senior guard Trent Frazier said. “Everybody did their role. Everybody came in with some sort of energy. Just played their butts off for 40 minutes when it was their time”

For the first time all season, head coach Brad Underwood made a change to his starting lineup. Junior forward Jacob Grandison made his first career start for Illinois, replacing Da’Monte Williams at the four. Grandison made his impact early, finding a spot in the middle against Penn State’s 3-2 zone and immediately dishing to Kofi Cockburn for a layup to get Illinois on the board. The Illini moved the ball well against Penn State’s zone, jumping out to a 13-5 lead.

The Nittany Lions wouldn’t quit. Five of their first six makes were threes and Myreon Jones’ third of the half tied the game at 17. This is a spot where Illinois had previously allowed teams to hang around, or even take the lead. They trailed Ohio State by 15 at halftime last Saturday. Northwestern had them down 15 in Evanston. Even against Indiana and Maryland, Illinois could only muster a two-point lead.

“Our energy level,” Cockburn said. “When we play connected and we play with that extra effort, it’s really hard to beat us. Coach emphasized that a lot in practice.”

In the first half, they relied on the outside shooting of Trent Frazier. Frazier, who injured his shoulder against Maryland, scored just eight points in the last two games. Tuesday night, he made three of his seven attempts from deep, finishing with 14 points. Illinois is now 5-1 when Frazier scores double figures.

Illinois seemingly kept Penn State at bay in the second half, never letting the lead get to below 10 points. A large part of that was the consistency of Cockburn, who seemingly always found himself with the ball near the hoop. He finished with 21 points and 12 rebounds for his sixth straight double-double and 11th of the season, leading the NCAA.

Beating Penn State is, by no means, a fix to all of Illinois’ problems. A road matchup with Michigan State on Saturday would have been a good litmus test for where this group was at before No. 5 Iowa comes to Champaign the following Friday. But for the first time since mid-December, Illinois was able to control the game from start to finish, and that’s a good place to be.

“I truly believe no one can bear us when we play for 40 minutes,” Frazier said. “We have to continue to stress that ‘40 minutes a game’ and have that same mindset everyday.”