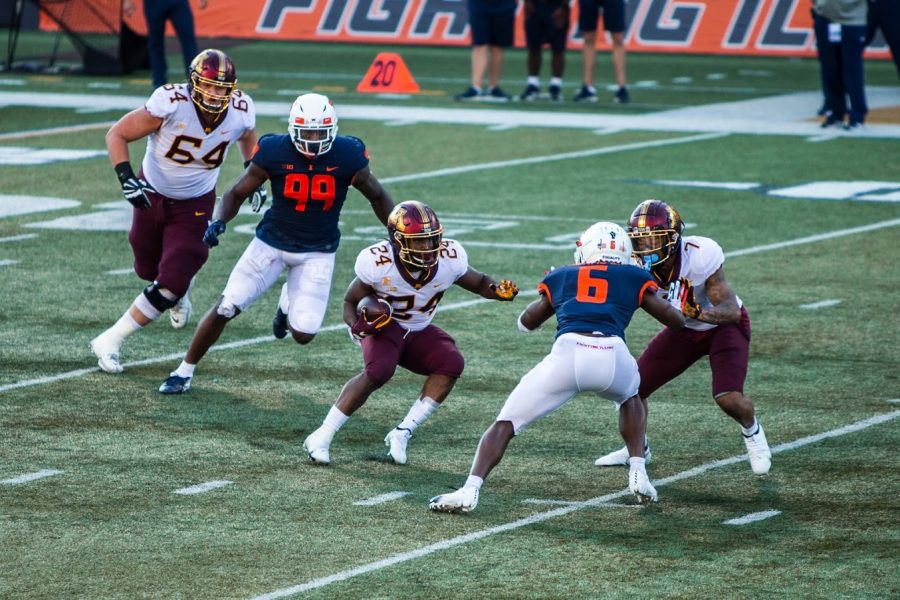 Senior defensive end Owen Carney (99) moves to tackle the opposing ball carrier during the game against Minnesota on Nov. 7.

For a split second, it appeared Lovie Smith had figured it out. The Illini, off two straight road victories, came out and punched Iowa in the mouth. Up 14-0 in the second quarter, the Illini’s Big Ten West title hopes were technically still alive. Lovieball was here to stay.

However, it was all downhill from there, as a late-season skid made athletic director Josh Whitman decide it was time to pull the plug on the Smith era.

Recruiting was sluggish, fan excitement was low and a list of seniors was set to graduate, leaving the next Illini coach with a new and potentially long rebuild. But by hiring Bret Bielema — the exact opposite of Smith — Whitman might’ve prevented that from happening.

With the combination of a respected coach and COVID-19 rules allowing seniors to extend their college careers, the Illini appear to have a chance to secure a bowl bid and jumpstart the program’s rebuild.

“You can see how things have changed,” said senior defensive end Owen Carney. “The little things and the energy of the team and the staff. I think the turnaround is going to be quicker than the rest of the world would think.”

Not long ago, it appeared Carney was gone. The Florida native announced in December he entered the transfer portal for his last season of eligibility.

Blue-bloods across the nation reached out to Carney, including Texas, Florida State and Penn State, with all of them complimenting his talent while promising to make him a better player. Carney had regular hour-long conversations with each program before making his decision.

“It wasn’t like high school, though,” Carney said. “There wasn’t too many giggles and laughs, no smooching going on. It was business-like.”

While Carney was receiving interest from college football’s finest programs, Bielema didn’t back down. Lurking in the background, Bielema and his staff pitched its sale regularly while respecting Carney’s decision to view other schools.

After reviewing his options, Bielema’s track record of coaching Carney’s position, combined with fellow defensive linemen returning, was too good to pass up, and Carney decided to return to the Illini.

A common theme from returning players is their respect for Bielema. They don’t care he got relieved of his duties from Arkansas. What they care about is how Bielema developed J.J Watt and other NFL talents at Wisconsin. They care about his NFL experience under Bill Belicheck.

“I know for a fact he has a lot of insight (developing defensive lineman),” Carney said. “That was a big factor in my decision.”

2019 was memorable, but 2020 was supposed to be Smith’s breakout season with so many starters returning. COVID halted those dreams by wiping away an easy non-conference schedule, along with forcing the Illini to sit out key players early the season against Purdue and Minnesota.

Still, the product on the field was below-average, capped off by Iowa’s 35-0 run over Illinois as well as Northwestern gaining 411 rushing yards on the defense. The team lacked grit, and it led to the Illini’s ninth straight losing season.

With Brandon Peters and most of the trenches returning, COVID has given the 2021 roster the chance to redeem themselves and prove to the conference Illinois football suffered not from talent but coaching.

Bielema is the exact opposite of Smith, as he’s a proven winner in the conference while proving he’s willing to change things up. But most of all, Bielema is hungry for instant success. Why else would he be lobbying for seniors to return for another season?

If a player had a chance to play under Steve Sarkisian or James Franklin, they would probably choose them over Lovie Smith. But Bielema provides Illinois instant credibility for a program that hasn’t produced a consistent winner since the mid-90s. Now, those players are deciding to give Bielema a chance to make their lives and better and prepare them for the NFL.

“We’re going to have a great relationship,” Carney said about him and Bielema. “I plan on trusting him and having faith in him.”