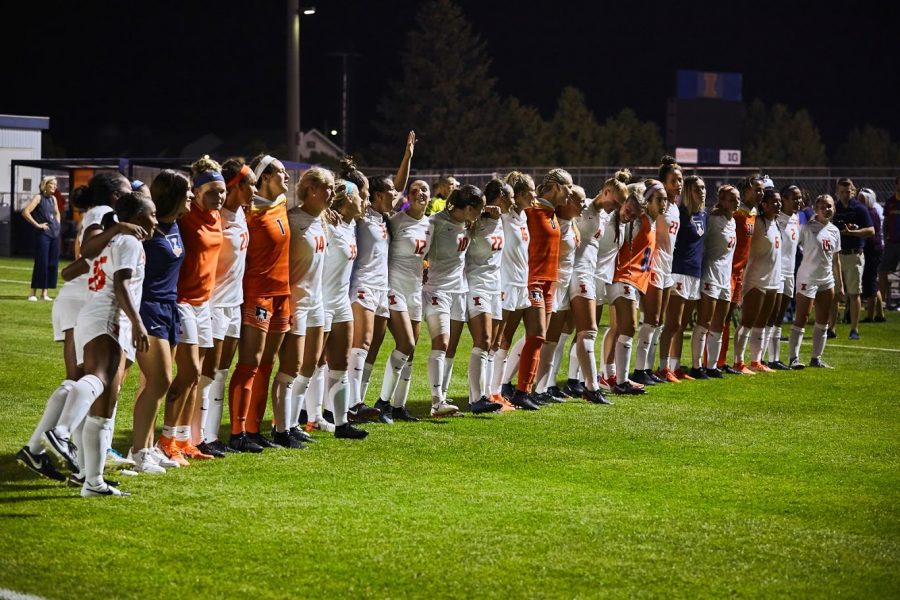 The Illini Soccer team gathered together on Sep. 20 on the soccer field vs Northwestern.

After a delayed fall season, the Illinois soccer team announced their schedule for 2021 on Friday.

The Illini will begin their season at home on Feb. 20 against Purdue, followed by another two home games against Iowa and Penn State. Then they will travel on the road for three away games with Wisconsin, Minnesota and Indiana.

On Mar. 18 and 21, the Illini will travel back to Champaign to face off against Nebraska and Ohio State. The last three games will finish away at Michigan, Michigan State, and Northwestern on April 3.

Per fightingillini.com, once the regular season has ended, the weekend of April 8-11 will be a “wildcard weekend” that will consist of one or two non-conference matchups against Big Ten opponents.

Following the “wildcard weekend” will be the Big Tournament from April 15-18. The championship weekend will consist of two semifinal games and one championship game that will be hosted by the highest seed remaining in the tournament.

Home games will hopefully be played at the newly constructed Demirjian Park. However, while it may be a new stadium, no fans will be allowed in.

With an extended amount of time to train and prepare for the season, the Illini will look to better their record from the 2019 season after an 11th place finish and a 3-7-1 record in conference play.