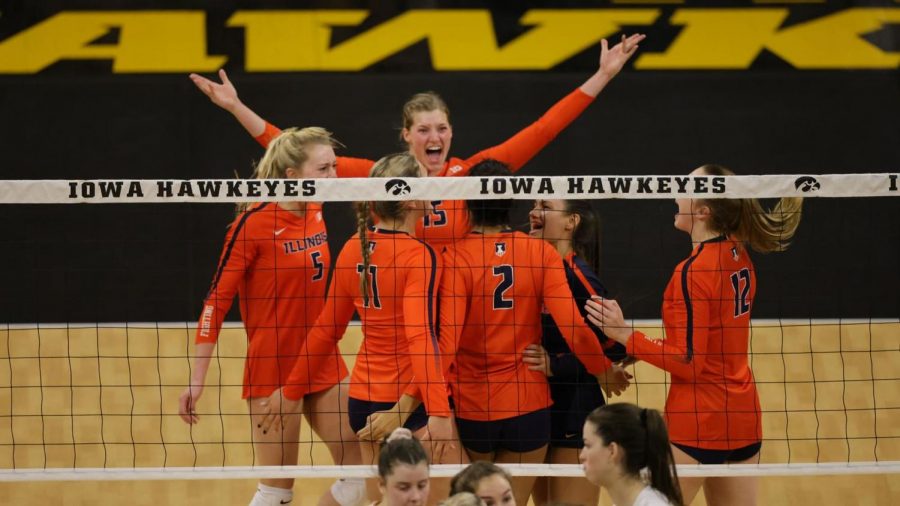 The Illinois volleyball team celebrates after scoring a point during the match against Iowa on Friday.

After over a year between matches, Illinois began its season strong with a 3-1 win at Iowa. The Illini started the match a little shaky, facing a 6-2 deficit in the first set, but ultimately got it together and won 25-20.

A big standout from the first set was redshirt freshman Ellie Holzman, who hit .800 with four kills. She was National Gatorade Player of the Year in high school and sat out last season with an injury. Despite the time off, she drew a spot in the starting lineup and proved it wasn’t an accident.

The second set was less fortunate for the Illini, who lost 25-23 after trading blows back and forth. After an intermission, Illinois rallied to an incredible 25-15 win in the third set before being entangled in a back-and-forth final set.

Illinois found themselves down early, facing five-point deficits at 18-13 and 21-16. Despite the Hawkeyes throwing everything they had at them, the Illini remained steady.

“We were all pretty high spirits in those moments,” said senior hitter Megan Cooney. “Nobody was really too down on themselves. We were just going for it. We were up two sets already so we knew that the pressure was mostly on them. Just play freely and do what we can do to get out of that little lead that (Iowa) had. Pull out a lead of our own.”

Illinois was able to pull off a six-point run from that point in which Iowa seemed to have no answers to redshirt sophomore Diana Brown’s serve. From that point on, Iowa would never hold the lead again. With the game still close, 24-23 in Illinois’ favor, Cooney registered the final kill to secure the win.

“(Getting the winning kill) felt great especially because the score was really close,” Cooney said. “I love finishing at 25 and not going over points if we don’t have to.”

As was expected, Illinois’ starting lineup looked much different from last year’s. Many underclassmen got the starting nod today, including sophomores Rylee Hinton and Kennedy Collins as middle blockers, Holzman and Reina Terry as hitters and Brown at setter. Taylor Kuper drew the start at libero and Cooney rounded out the starting lineup as a hitter.

Hinton and Terry both filled up the stat sheet with eight and seven blocks, respectively, while Cooney had the most resounding performance of the afternoon, tallying up 17 kills, including the aforementioned match-winner.

Now that the Illini have settled in, the question will be how adjustments factor into playing Iowa for the second day in a row on Saturday.

“(Making adjustments is) interesting because do you make the adjustment or do you wait for them to make the adjustment?” said head coach Chris Tamas. “That’s kind of how it goes anyways during a match. We’ll probably look at some things that we had success on and I’m sure that they’ll do the same. That’s part of the joy of volleyball. I think it’s like a little chess match. We just got to be ready to make some adjustments and be ready for theirs and try to stop what worked for them and keep doing what works for us.”

At the end of the day, it seemed like everyone was just excited to be back on the court regardless of the outcome. Now that the Big Ten has been able to get games on the calendar and players on the court, Illinois can focus on winning.

“A lot of great emotions today for a lot of different reasons,” Tamas said. “It’s been a long time. It seemed like this day would never come. Hats off to Illinois, the Big Ten athletic department. The players, coaches who just stuck with it. Really happy to be back out here. Definitely saw some 57-week rust, but I’m really proud and happy of how we settled in. Found our game at the right times, and hopefully we’ll play one match better tomorrow.”