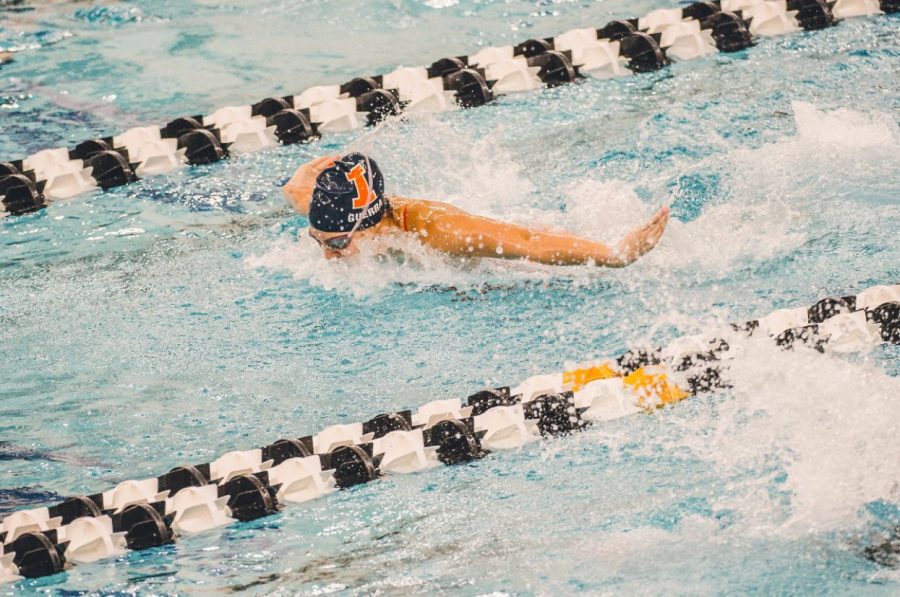 Sophomore Isabelle Guerra competes at the meet against Purdue on Jan. 16.

The Illini women’s swim and dive team will travel to Lincoln, Nebraska, to face off with the Cornhuskers on Saturday. The meet is scheduled for 11 a.m. Central Time at Nebraska’s Devaney Center Natatorium.
Both teams are coming off losses from their previous meets on Jan. 16, as Illinois lost to Purdue, 173-122, while Nebraska fell to Iowa, 170-128.
The Illini are currently on a five-meet losing streak to Nebraska, with their most recent loss coming last season on Jan. 25, 185-115.
Their most recent victory against Nebraska, however, took place during the 2014-15 season where they won 171-129.
Some current Illinois swimmers and divers that competed against Nebraska during last season’s loss, including junior Abigail Cabush and sophomores Erin Young, Athena Salafatinos and Isabelle Guerra, will have an opportunity to repeat strong performances against the team. Young placed third in her three-meter dive, while Salafatinos, Guerra and Cabush all came in first place in their 200-freestyle relay race during last year’s meet.
After last week’s loss, head coach Sue Novitsky highlighted how good it was seeing her team staying head-to-head with Purdue and mentioned some improvements she hopes to see coming into this week’s meet against Nebraska.
“There are always things to clean up a bit,” said Sue Novitsky. “One of the things we needed to clean up was the turns for the swimmers because they were not as clean and powerful as we’d like them to be. We always need to keep working on our relay exchanges because we had some really slow ones today.”

Following this meet, the Illini swim and dive team will be traveling to Madison, Wisconsin, to face off against Wisconsin and Northwestern in a dual meet on Feb. 6.