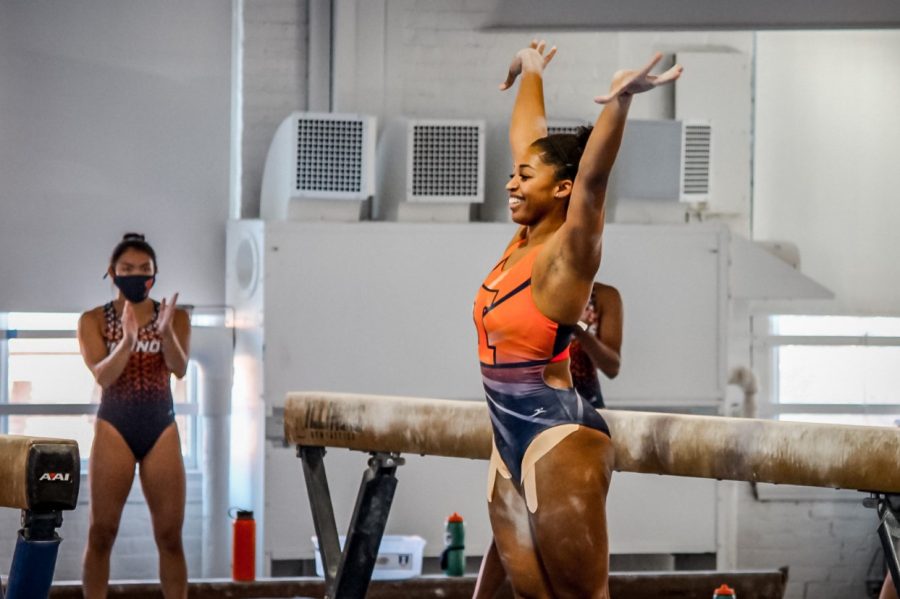 Junior Shaylah Scott poses as she finishes a routine during practice.

The Illinois women’s gymnastics team will travel to Piscataway, New Jersey, on Saturday for a tri-meet against Rutgers and No. 28 Maryland.

“Going into this week, I would say that everybody on the team is really driven to add on to what we did last weekend,” said junior Shaylah Scott. “Everybody’s determined to just keep improving and doing a better job in making sure that every turn counts so that we can do our absolute best.”

“I think we just walked to the meet really unified when we were at Nebraska. I can honestly say that my team took over that arena, our atmosphere, our connection and our unity,” said head coach Nadalie Walsh. “It was very tangible. So I want the girls to do the same thing (here). Be very in the moment and very excited for each other and very much united as a family. And if we do that, I don’t think that we will have any problems with the competition around us.”

Walsh wants to win, but she also wants to see more precision in their gymnastics and a higher score. Both Scott and Walsh believe the more confidence the team has, the better they’ll do.

Three freshmen competed last week and with more experience comes more confidence. They no longer have to worry about and wonder how college meets are. The rest of the team no longer has to wonder if the young gymnasts are ready for this level, as they are now equipped to handle the pressure and expectations put on their shoulders at this level.

“By picking some of the student athletes that were not able to compete all of their events at Nebraska, we’ve been adding them one person at a time. That is just a continual morale booster,” Walsh said. “When you look over and you see a teammate or your student athletes who you know is maybe one of your better vaulters or a better floor worker and they were out last week and now they’re back doing their stuff, it creates a momentum that is very organic, so that’s been a lot of fun this week. We’re excited to have even stronger lineups.”

This meet was a surprise, as it was originally a dual-meet between Rutgers and Illinois before it was changed to aid Maryland when Michigan State had withdrawn from a prior scheduled meet between the two teams.

Maryland defeated No. 27 Penn State 194.875 to 193.975 in their first meet, while Rutgers was forced to withdraw from their tri-meet with No. 5 Michigan and No. 29 Ohio State because of an increase in positive COVID-19 cases within their program.