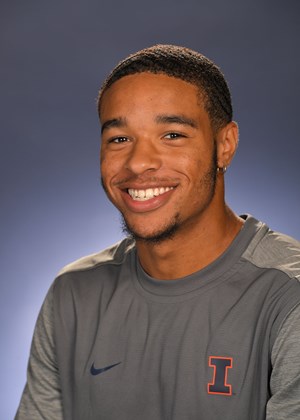 Aman Thornton poses for a headshot. Thornton took home first place in the 600-meter premier at the Larry Wieczorek Invitational this weekend.

After battling Northwestern and Wisconsin last week in Madison, the Illini traveled West to participate in the Larry Wieczorek Invitational, a two-day, Iowa Hawkeye hosted event. The Illini made some progress with multiple athletes taking first place or setting personal records.

The invitational spanned over the course of Friday and Saturday, and the Illini struggled to capture first place in most events, although some athletes still delivered very impressive performances.

“At the same time, this week it was a bigger meet, more challenging competition and schedule,” said director of track & field Mike Turk in a press release. “After our great opening weekend, we really focused on execution, aggressiveness taking chances and enthusiasm. We checked all those boxes, I like the way we are competing.”

A similar situation occurred on the women’s side, where Illini sprinter Danni Stoughton set a personal record with the 200 meter dash with a time of 25.28, which was a virtual tie with Minnesota’s Jayla Campbell. However, after further examination, Campbell bested Stoughton a hundredth of a second.

Friday wasn’t completely full of moral victories, though. Aman Thornton took home first place in the 600-meter premier, with a time of 1:18.05, holding off Iowa’s Julien Gillum by three-tenths of a second.

After Friday’s events were wrapped up, the Illini had a short break before resuming action early afternoon Saturday. Despite struggling to secure first place, the Illini were able to double up its Friday total with two running events.

The Illini showed its strength and versatility in the running department, with Jon Davis stealing the show in the 3000-meter event. Davis dominated the field, finishing with a time of 8:08.85.

“Jon is a veteran,” Turk said about the redshirt senior. “His path has been a bumpy ride but he has had a solid block of continuous training. He ran strong physically and displayed the kind of mental toughness that makes him great.”

Despite the first-place finish, Davis fell short of his personal record by over 10 seconds, although that doesn’t reveal how dominant he was. Second place went to teammate Jack Roberts, who finished 22 seconds behind Davis.

After almost finishing first in Friday’s 200-meter dash event, Stoughton had another stellar performance in the 400-meter, securing her first place this time around. Stoughton finished with a time of 57.28, holding off a tough challenge from Minnesota’s Dalayni Etienne.

Almost winning first place, Jessica McDowell ran a fantastic race in the 400 meter, finishing with a time of 55.67, a personal record. McDowell’s performance landed her second place on the day.

Overall, the men’s team finished in third place while the women finished in fifth place. The Illini have a week off before hosting the one and only home meet on Jan. 30.