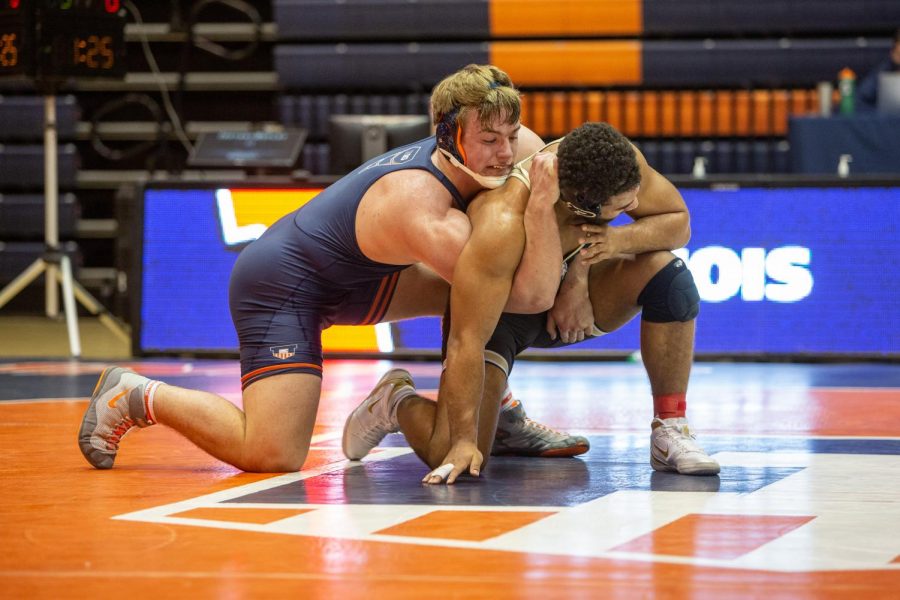 Sophomore Luke Luffman locks his opponents arm during the match against Purdue on Friday. The Illini won the match 19-17.

The Illini defeated the Purdue Boilermakers 19-17 on Friday night, improving to 4-0 on the season. Illinois and Purdue each won five bouts in their matches, but it was Illinois who came out on top after securing multiple key victories.

Luke Luffman, Dylan Duncan and Lucas Byrd all continued their perfect seasons as they secured wins in their matches. Redshirt sophomore Danny Braunagel, who missed last night’s match due to injury, thought the team performed well despite the late start time.

“I think guys stayed solid all the way throughout the dual,” Braunagel said. “It was one of those 7:00 night duals and people were getting tired, but at the same time we were able to stay disciplined and battle all the way through.”

Braunagel thinks the team has been doing a great job so far, but the offense and energy level could be a little more intense.

“I think we are off to a great start,” Braunagel said. “Everyone is wrestling really well. We are making good decisions and we are all being gritty through tough situations, but I still feel like we need to find our offense a little bit more. I feel like we will all have it down by the end of the season, and it will be something very exciting to see.”

Sophomore Lucas Byrd continued his impressive start to the season, picking up three takedowns early in the first period. The Illini took a 6-3 lead after the first two bouts.

After missing last weekend’s tri-meet due to injury, redshirt senior Dylan Duncan returned to the mat on Friday. Duncan, who dominated in the 141-pound bout, had multiple takedowns early to secure an 11-3 victory. Duncan is now 2-0 on the season.

Freshman Luke Odom was unable to score in his match and was defeated in an 8-0 decision by Purdue’s Gerrit Nijenhuis.

Redshirt junior Matt Wroblewski was defeated in a 5-3 decision, which gave Purdue a 17-16 lead heading into the last match of the day.

Sophomore Luke Luffman took down his opponent at the end of the first period to go up 2-0. Luffman remained in control for the entire match, which led to the 4-0 victory and gave the Illini their fourth win of the season. Luffman remains unbeaten.

The Illini have looked fantastic so far, but the real test comes next weekend when they will face off against No. 1 Iowa Hawkeyes and No. 2 ranked Michigan Wolverines in a tri-meet. Braunagel and the rest of the guys know what they will be taking on.

“I feel like all the meets we’ve had so far have been warmups for what we have coming up,” Braunagel said. “Iowa is number one in the country and Michigan is number two and it is definitely going to be the biggest test of the year. I’m excited to see how we do.”

The tri-meet will take place next weekend in Iowa City and will be streamed live on BTN +.