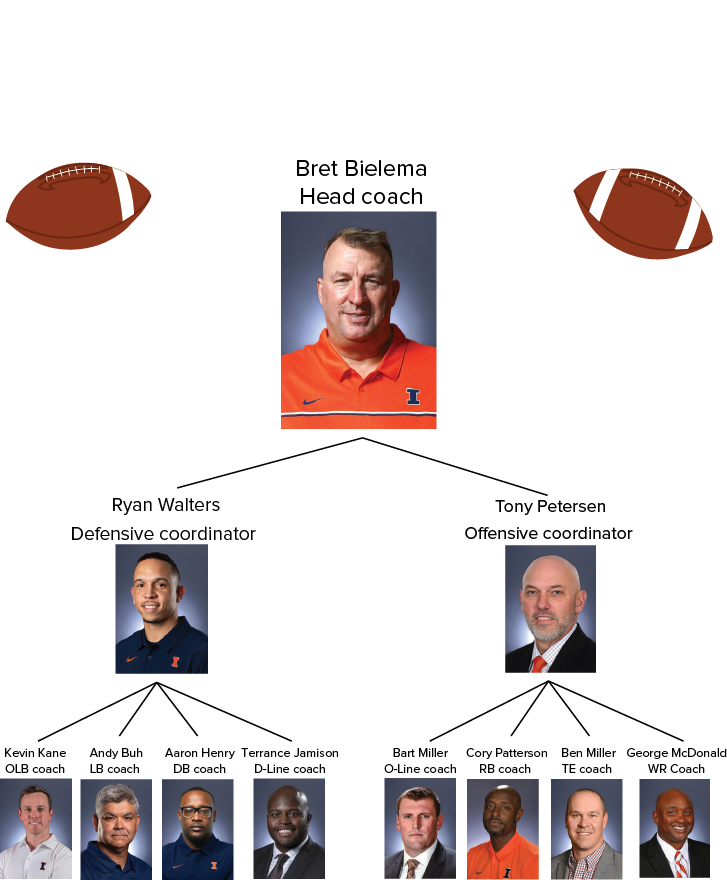 Just over a month after being named the new head coach at Illinois, Bret Bielema has finalized his staff for the 2021 football season and has retained multiple key players for an extra year of eligibility.

Bielema hired nine new coaches and kept one coach from the 2020 season, giving him 10 total coaches on his staff for the upcoming season. His first hire as head coach came shortly before the new year, naming Tony Petersen as offensive coordinator. Petersen comes to Champaign after spending a season as offensive coordinator for a high-scoring Appalachian State offense and was also the OC for the Louisiana Tech team that handled Illinois in the Heart of Dallas Bowl in 2014, scoring 35 points.

Shortly after the hire of Petersen came Bart Miller, who was hired as the offensive line coach. Miller coached under Bielema at Wisconsin and has proven on multiple occasions that he knows how to coach impressive offensive lines that boost run games and give quarterbacks time to throw.

During an introductory press conference, Miller put an emphasis on how important it’ll be to recruit in-state players, something Bielema himself has stressed and was looking for while hiring coaches.

“Bart has Midwest roots and will help us recruit and keep Illinois players at home wearing the Orange and Blue. We are very excited to have Bart join our Illini family,” Bielema said.

One member of Lovie Smith’s coaching staff that stood out among the rest was Cory Patterson. Patterson was Illinois’ tight ends coach under Smith but helped the Illini out by doing much more than coaching.

Patterson has ties in different parts of the country and was the best recruiter on Smith’s staff. He recruited quarterback Isaiah Williams, an ESPN top 300 player, and many more key Illini players. Bielema understands the importance of Patterson’s recruiting skills and retained him on his staff, moving him to running backs coach.

“After meeting Cory a few weeks ago, I came away impressed with his passion for coaching and the Illini family,” Bielema said. “During our transition, he will now coach our running backs and work with us in recruiting to find the individuals who can best help us win championships.”

In one of the more surprising hires Bielema has made as an Illini, Ryan Walters, who has been the defensive coordinator at Missouri for the past five years, left to take the defense coordinator job at Illinois.

Walters, considered to be one of the best young coaches in college football, has successfully transformed what was a weak Missouri defense into one of the best in the SEC. Defense has been a struggling area for the Illini over the last decade, and Bielema is bringing in a proven coach to now lead his defense.

“Ryan has demonstrated great success in his coaching career as an assistant, as a coordinator and as a leader of young men” Bielema said. “He’ll be a great addition to our staff to help us motivate, recruit and develop a roster full of champions.”

Under Lovie Smith, Lovie was the defensive coordinator as well as head coach, never naming another official DC. His biggest strength was supposed to be his defensive coaching ability, but his NFL success never seemed to translate to the college game.

“(Andy) has been a part of several Big Ten programs as a successful defensive coordinator as well as linebacker coach … I first hired Kevin as a defensive graduate assistant and now I’ve seen his career grow, develop and flourish in the coaching profession as an assistant coach as well as a coordinator. He brings a wealth of knowledge to our staff at Illinois,” Bielema said of Buh and Kane.

Between Bielema and the rest of his staff, the coaches have a combined 189 years of coaching experience, giving the Illini 11 bright, experienced minds to lead them during the 2021 season.