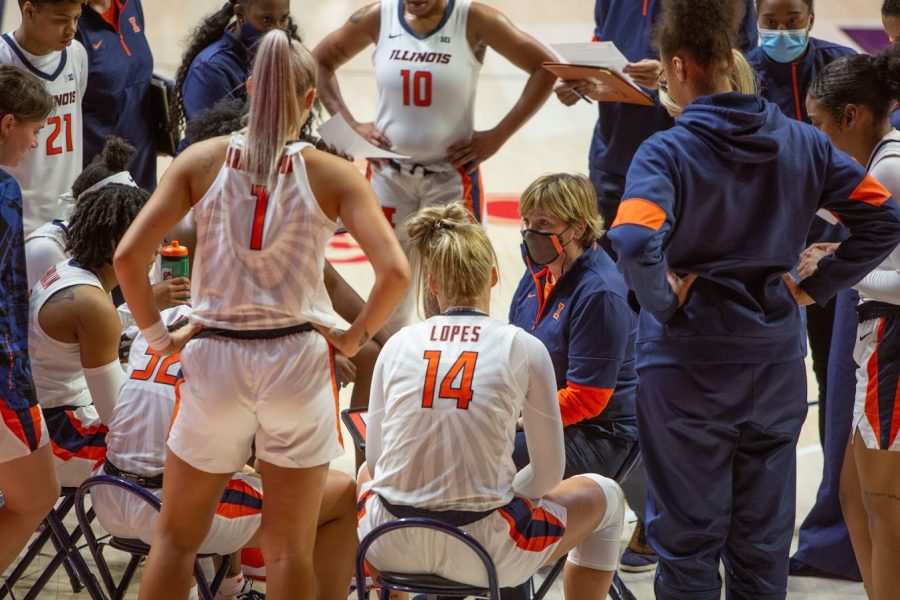 Head Coach Nancy Fahey speaks to the Illinois women’s basketball team during a timeout at the game against Valparaiso on Dec. 2.

The Illinois women’s basketball team will take on Nebraska Monday night at the State Farm Center. This will be the Illini’s second game against the Cornhuskers, where these teams played a close back-and-forth game in the last matchup.

Through three quarters both teams were trading baskets and keeping the game tight. Nebraska led by just a point after three, and it appeared as though the Illini were going to leave Lincoln with a win after leading by four points with just three and a half minutes left in the game.

A late Nebraska run led by junior guard Sam Haiby was too much for the Illini, and Nebraska came away with a 78-72 win. Haiby frustrated Illinois throughout the game, finishing with 33 points, a career-high, as well as nine rebounds.

Since that matchup, Haiby has continued to score at ease, averaging 16.7 points per game in the nine games since.

“(The first game against Nebraska) was quite frankly a breakout game for (Haiby), and kind of set her on the path that she has been following since then,” said head coach Nancy Fahey. “One of our goals will be to really keep her in front as much as we can and sit help when we have to.”

The Illini will also have to watch out for sophomore forward Isabelle Bourne. She had a monster performance against Illinois last time out with 21 points and eight rebounds. After averaging just six points a year ago, Bourne has taken a giant leap. This season she’s scoring 14 points a game, second on the team.

The Illini will look to stop the frontcourt. In addition to Bourne, Nebraska’s senior center, Kate Cain will be a tough matchup for the Illini’s redshirt-junior center Eva Rubin. Rubin usually has the size advantage with her 6-foot-5 frame, but Cain matches her height. Fahey, however, isn’t too scared of the matchup.

“I thought Eva did a great job against Cain in game one,” Fahey said. “We have a strategical plan with her, Eva doesn’t play 40 (minutes) but neither does Cain so there will probably be strategies on when we both sub.”

Illinois will need sophomore forward Kennedi Myles to continue her strong offense of late. She has scored in double figures in three straight games but in the first game against Nebraska, Myles struggled. She scored only four points and made just one of her eight shots. Myles knows that she and the team will have to play better offensively if they are going to beat Nebraska

“Just knowing that (scoring is) what we’re lacking, defensively is not where we’re struggling,” said Myles. “One thing that we’ve been working on going into this next game is getting more points on the board regardless of how many stops we get.”

Illinois is also hoping to see more from their backcourt. Sophomore guard Jada Peebles has struggled shooting lately, and even though sophomore guard Jeanae Terry has put up good scoring outputs, she has turned the ball over at least seven times in each of her last three games.

The Illini’s next outing will be with Penn State on Thursday at home. The Illini’s last win against a Big Ten opponent came against the Nittany Lions a season ago.