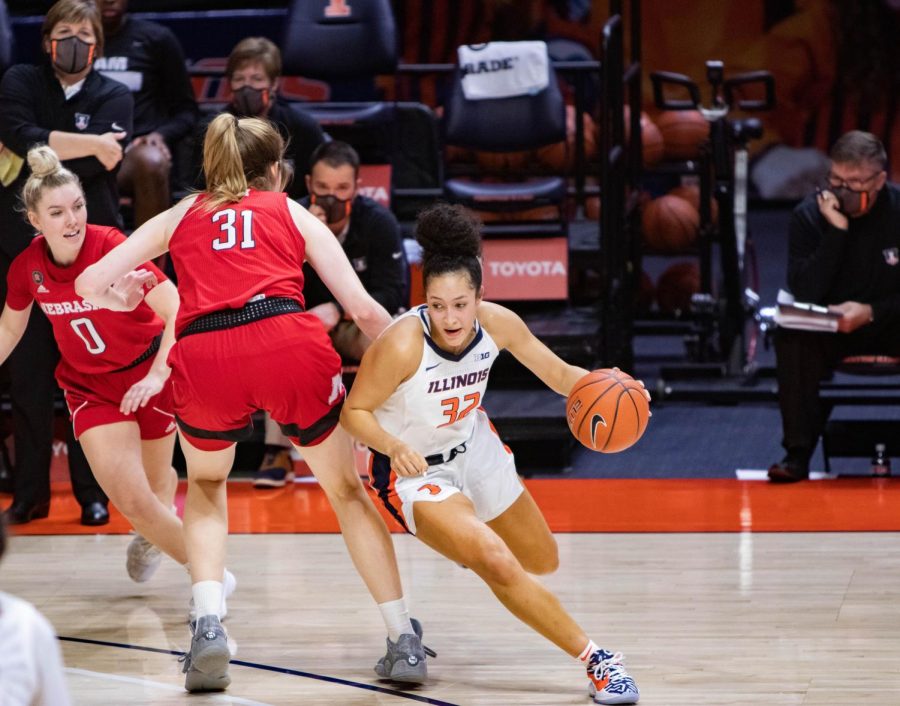 Aaliyah Nye dribbles past a defender in Illinois’ game against Nebraska on Monday. The Illini lost 57-53.

The Illinois women’s basketball team lost to Nebraska 57-53 Monday night at State Farm Center. Late offensive struggles were the difference in the game.

“We attempted a lot of shots, but it wasn’t able to fall. That’s all you can ask for is to get attempts, we just weren’t able to hit it,” said sophomore forward Kennedi Myles.

The Nebraska offense got off to a slow start, in large part because of the Illini’s defense, but junior guard Sam Haiby would bail out the Cornhuskers with two threes late in the shot clock. The first quarter was close. Illinois took an early lead, but Nebraska came from behind and led down the stretch. A late three by freshman guard Aaliyah Nye brought the Illini within a point after one quarter.

The Illini would respond well, going on a 13-3 run to take a 26-22 lead with a little over two minutes left in the half. After one half of play, the Illini led 27-24, their first halftime lead since the first Nebraska game over a month ago.

“She just does so many good things for you, expands the floor, hits shots are very offensive-minded,” Fahey said. “If you consider she’s been out for four and a half weeks and the way she played, it was a big boost to have her back.”

Nebraska came out in the third quarter strong. Led by their great interior defense, the Cornhuskers went ahead by four points before the Illini would come right back and take the lead.  It would be another close game heading into the final frame, with Illinois leading by two points.

To start the fourth quarter, both teams would trade baskets until Nebraska’s freshman forward Annika Stewart made back-to-back threes and gave the Cornhuskers a 49-46 lead.

With 2:15 left in the game, the Nebraska lead stood at three points, but following a Nye foul, the Cornhuskers would go to the line and go up two possessions. Nye would redeem herself shortly after by making a three-pointer and bring Illinois within one point. On the ensuing possession, Nebraska’s freshman guard Ruby Porter would miss a three and give Illinois the chance to take the final shot in the game.

Despite the loss, Illinois’s defense played well. Nebraska shot below 30% from the floor and was held to less than 60 points for the first time in five games.

“We’ve struggled offensively, so we want to make sure we did a better job stopping people, keeping their point totals down which, we have,” Fahey said.

The Illini designed their defense to take away Haiby, full-court pressing just Haiby. It wasn’t enough. Haiby finished with 22 points, 12 of which came in the second half.

For the Illini, Nye was the only player to reach double figures with 15 points on an efficient 6-11 from the field.

The Illini will stay home for their next game where they will face Penn State Thursday.