Illinois is running out of time to meet lofty expectations 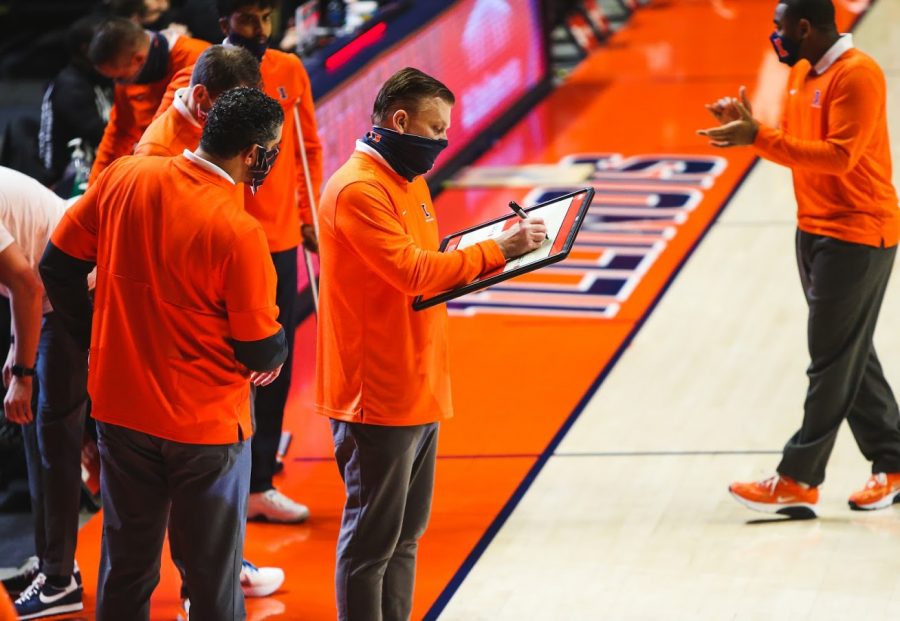 Illinois coach Brad Underwood plans a play on the sidelines during the game against Purdue on Jan. 2.

Expectations were higher than they had been in 15 years for Illinois basketball entering the bizarre 2020-2021 COVID-19 influenced season.

But in its first real challenge against Baylor, Illinois lost. The Bears, however, are indisputably one of the two best teams in the country and have yet to lose a game.

They responded to that loss with a resounding win at Cameron Indoor stadium against Duke, which at the time appeared to be a signature win. But the Blue Devils have faltered since, dropping out of the AP rankings for the first time since 2016.

They would then lose two of their next three (at Missouri and at Rutgers). The Tigers have remained in the AP poll, but the Scarlet Knights have sunk to the bottom half of the Big Ten.

A four-game winning streak gave some hope that maybe those losses were behind them. But none of those wins (Penn State, Indiana, Purdue and Northwestern) were against high-caliber teams.

Those victories were not a sign of things to come, as Illinois dropped consecutive home games to Maryland and Ohio State. Head coach Brad Underwood was as vehement as ever after the loss to the Buckeyes; they needed to improve.

Despite a relatively hard schedule, nobody expected the preseason No. 8 team in the country to have five losses before the second week of January.

“We have to stop riding the emotional roller-coaster that is this team right now,” Underwood said. “And it’s frustrating. I wish I had the exact answer. We’re going to have some very tough meetings.”

Illinois went on to cruise past Penn State, a team that has struggled to put wins together this year. That leaves them at 10-5 and in fourth place of the Big Ten, with their toughest stretch of the season coming up.

They play current Big Ten leaders Michigan and Iowa once, Wisconsin twice, a road game at Minnesota and at Indiana. Bart Torvik projects them as underdogs in three of those games and in three of those 10, Illinois is just a one-point favorite.

For the Illini, it’s time to live up to that top 10 ranking. At times, they’ve shown what they’re capable of. They annihilated Minnesota, beat Northwestern by 40 points in one half and were in a close game with Baylor for 30 minutes. Ayo Dosunmu has been as good as advertised. So has Kofi Cockburn. At times, Adam Miller and Andre Curbelo have flashed what makes them so enticing, just rarely in the same game. Even Da’Monte Williams has taken that coveted leap as a three-point shooter. But the consistency from all role players hasn’t always been there, leading to the losses.

In terms of their offensive and defensive efficiency, their numbers most closely mirror the 2010 Xavier team, 2014 Kansas team and 2014 Xavier team. Of that group, the 2010 Musketeers went the furthest in March, losing in the Sweet Sixteen.

For a program that hasn’t made a Sweet Sixteen in over 15 years, most would be pleased with that result. But for this team that has Final Four aspirations and has at times shown those flashes, a Sweet Sixteen loss is probably a disappointment.

Illinois needs to play their best basketball of the season down the stretch, not only to improve their NCAA Tournament seed but also to show they’re capable of winning big games. These questions will be answered in due time, and it starts on Friday against Iowa and Luka Garza.