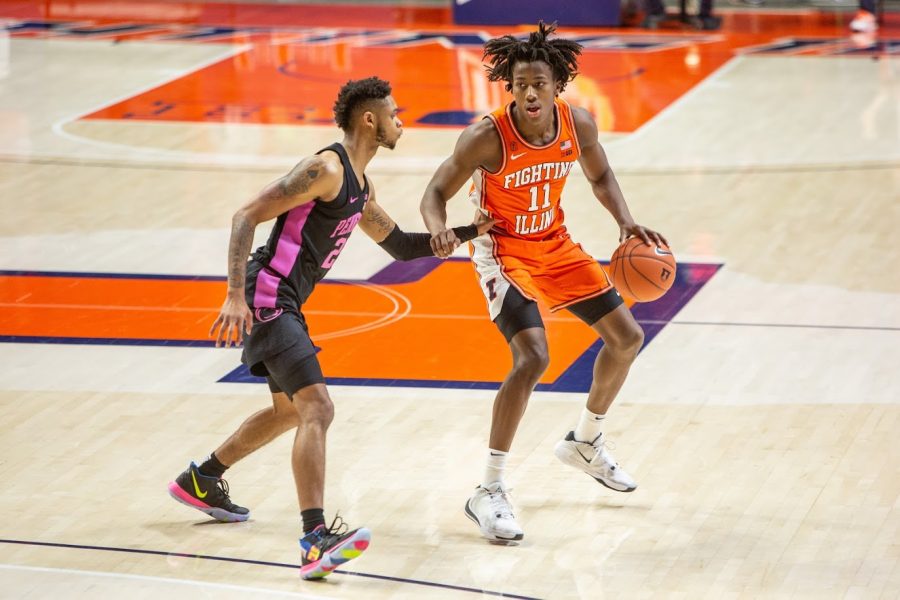 Junior Ayo Dosunmu looks to pass during the game against Penn State on Jan. 19. Dosunmu has recently made the top 10 list to receive the Bob Cousy Point Guard of the Year Award.

Ayo Dosunmu has been selected as a top 10 candidate for one of college basketball’s most prestigious awards, the Bob Cousy Point Guard of the Year Award, the Naismith Memorial Basketball Hall of Fame announced on Monday. The award has been on Dosunmu’s mind for quite some time as he mentioned it as a longtime goal in the Twitter video where he announced his Year 3 return to the Illini. The only Illini to ever win the award was Dee Brown in 2006.

Over halfway through the season, Dosunmu is averaging 21.7 ppg, ranking second in the Big Ten (behind Iowa’s Luka Garza) and eighth in the country. He is the only current Cousy Award nominee to rank among the country’s top 10 scorers. The candidate closest to Dosunmu is Carr who averages 20.9 ppg (third in Big Ten, 19th in the nation). The Illini junior also ranks second in the NCAA with nine games of over 22 points and is one of just nine players who has scored 30-plus points in three or more games.

Dosunmu has continued to be an elite player even when he isn’t scoring. He ranks fourth in the Big Ten with 4.9 assists per game and 19th in the conference with 6.3 rebounds per game. Dosunmu is one of just two players in the NCAA to be averaging at least 20 points, five rebounds and four assists.

The Bob Cousy Award isn’t the only honor Dosunmu is being considered for. Before beginning his third collegiate season, Dosunmu was an AP Preseason All-American and a unanimous preseason selection for the All-Big Ten Team. He is a midseason candidate for the Wooden Award and is in the running for National Player of the Year.