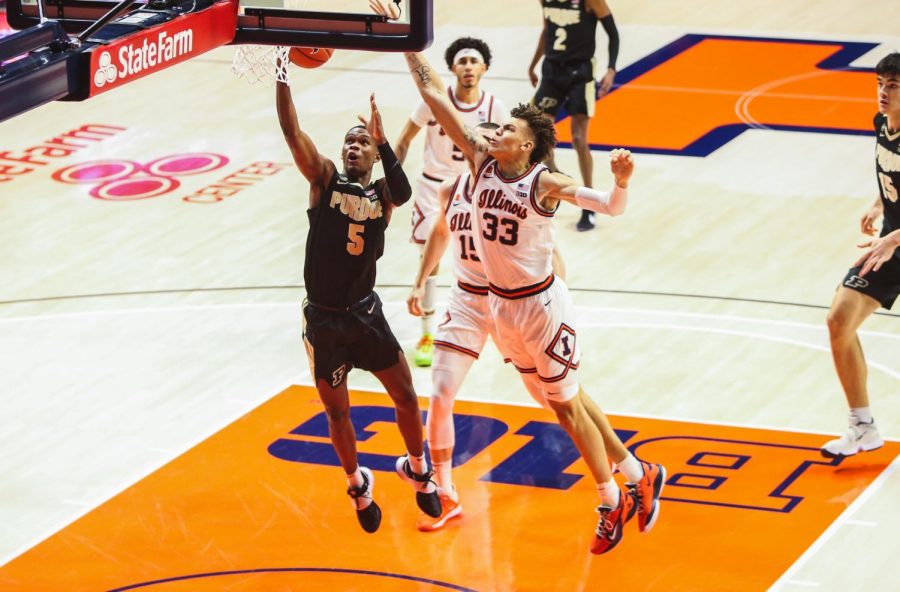 Forward basketball player Coleman Hawkins reaches up to block a shot against Purdue on Jan. 2 at State Farm Center.

Look at the second row of the Illinois bench after a made basket, and you’ll find the bench mob. The group is made up of players who don’t typically see a ton of time, like walk-ons Edgar Padilla, Zach Griffith and Brandon Lieb.

Then, there’s six-foot-nine Coleman Hawkins. The freshman forward is one of the most active on the bench, constantly cheering on his teammates. Hawkins was a star for powerhouse high school team Prolific Prep, but he’s become an integral part of Illinois’ team in a different way.

“I think everyone has a role, and if you’re not in the game you have to do something to help your team,” Hawkins said. “I think being a good teammate and showing that on the bench and bringing energy for the team, that’s always a big thing, especially when there’s no crowd. You gotta be able to provide some source of energy.”

But Hawkins is a little different from the walk-ons. Head coach Brad Underwood has used him in 14 games this season. In their last outing against Penn State, Hawkins played a season-high 14 minutes and made his impact felt right away. He missed his first jumper, but got to the free-throw line two possessions later and drained both attempts.

He would later drain his second three-pointer of the season and register a season-high three blocks. After the third block, Hawkins said something to an opponent, earning him a technical foul. Underwood pulled him out of the game but wasn’t too upset with his freshman forward. Hawkins would later re-enter the game.

“I really liked that,” Underwood said of Hawkins’ technical. “I say that in a half-serious way. He made a heck of a block and I kinda liked that grit. I was kind of that trash-talking … that was kinda me. (But) he’s gotta learn you can’t do that in front of an official.”

Hawkins’ upbeat vibe translates off the court as well. Teammates have raved about him as a person and as someone they enjoy spending time with.

“You can ask anyone on the team, you’ll know when I’m around,” Hawkins said. “It’s good to have positive energy. Nobody wants to be around a guy with negativity. For me, it’s always going to be positive.”

For now, it appears Hawkins will continue to be used in a minor role. He’s playing behind veteran front-court players like Da’Monte Williams, Jacob Grandison and Giorgi Bezhanishvili. But games like the Penn State game show the flashes of what Hawkins can be. Down the line, he could be the third key piece in Illinois’ 2020 recruiting class.

“You’re gonna see at some point in the not-too-distant future how good a talent Coleman Hawkins is,” Underwood said. “I love his skill set. He’s been great in practice. He’s a guy that does things you can’t coach.”

Until that time comes, Hawkins can be found on row two of the Illini bench, encouraging his teammates on defense and celebrating their success on offense.