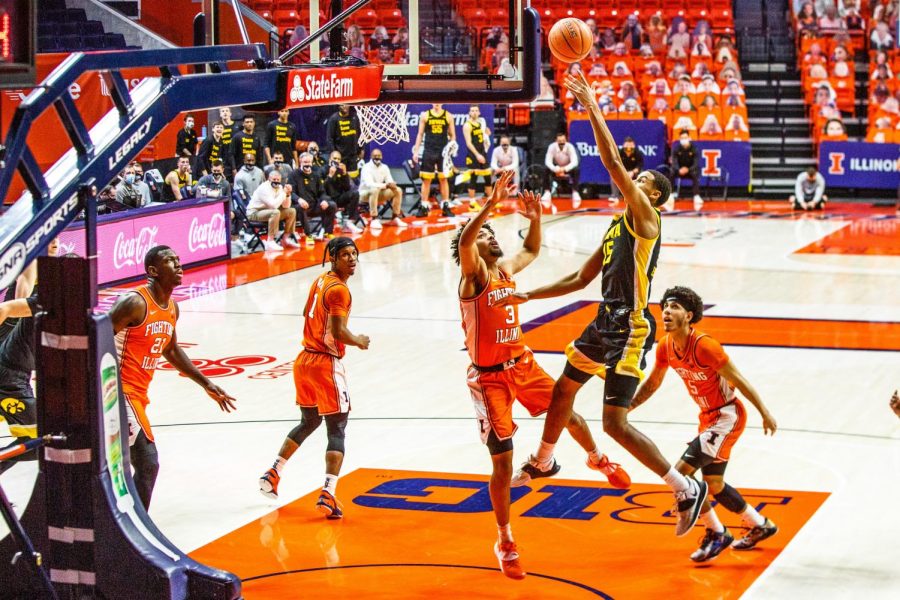 Jacob Grandison defends a shot in Illinois’ game against Iowa on Friday. The Illini won 80-75.

With Iowa leading by one, Illinois stayed patient against the Hawkeyes 3-2 zone. They passed the ball around, waiting to find an open shot.

Freshman point guard Andre Curbelo saw the bottom of the zone sink in and skipped the ball to the opposite corner. There stood Jacob Grandison. The junior transfer had only made seven threes in his Illinois career. But even in a pressure situation, he stepped up and confidently drained it to give Illinois a 74-72 lead.

“We ran the play for him on the backside of the zone to spot up,” Brad Underwood said of Grandison’s jumper. “And shoot, he knocked that sucker down.”

A few defensive stops and made free throws later, and the Illini had their first signature win, toppling No. 7 Iowa 80-75.

The first half was the high-scoring, close affair that many expected. The Hawkeyes showed why they have the nation’s No. 1 offense on Ken Pom, but also why they have the nation’s No. 99 defense. The stars brought respective A-games for both teams. Iowa senior center Luka Garza, the nation’s leading scorer, dropped in eight quick points. Meanwhile, Dosunmu had one of his best first halves of the season. He dropped in buckets in transition, in the half-court, from the mid-range and from three to go for 19 points on 9-12 shooting.

The Illini also got a huge boost from senior guard Trent Frazier. Frazier came into the game averaging a career-low 8.7 points per game, but found his groove against Iowa’s shaky perimeter defense. With the shot clock winding down, the lefty fired up a fadeaway prayer from beyond the arc, to give the Illini a 43-41 lead entering the break. Frazier already had 14 points at halftime. Neither team had led by more than four.

“After practice, I get in that zone where … I just throw up shots from everywhere on the court,” Frazier said. “Obviously I consider that a lucky one, but I practice weird shots like that.

Illinois used that Frazier three at the end of the half to gain some momentum to start the second stanza. First, Kofi Cockburn scored his first bucket inside before Frazier hit a corner three, and the Illini had their largest lead at seven. But the Hawkeyes wouldn’t field easily. Garza finished inside and Jordan Bohannon drained his first three of the game to bring Iowa back within two.

The Illini maintained that two-point lead trading buckets with the Hawkeyes until Iowa wing Joe Wieskamp swished a three to give Iowa a 65-63 lead. He would do the same thing a few minutes later, this time giving the Hawkeyes a 72-71 lead with 2:42 remaining.

But Grandison hit the biggest shot of his Illinois career, and Illinois had a two-point lead. Iowa had some life at the end after a Bohannon three cut the lead to 78-75 with 12 seconds left. After a five second violation, the Hawkeyes had the ball with a chance to tie. But, Bohannon’s shot was wide right, finalizing an Illinois victory.

A key reason for Illinois’ victory was their collective team defense on Garza. He scored just 11 points in the final 35 minutes of play, missing nine of his 18 shots.

“I think he’s as good an offensive player in the post I’ve seen since I was able to coach Michael Beasley,” Underwood said. “We gave some support from some different areas, did some things on the backside coming low on the baseline…it was trying to give him different looks and making things uncomfortable and hard. You’re not gonna hold Luka under 20 many nights.”

This was easily the biggest win of the season for the Illini, who now jump to 7-3 in conference and third in the Big Ten, two games behind Michigan in the loss column and tied with Wisconsin. Illinois faces the Badgers next Saturday after a trip to Indiana on Tuesday.

But for now, the Illini can enjoy the resume-boosting win.

“Everyone knows where we stand with Iowa and where Iowa stands with us when it comes to relationship stuff,” Dosunmu said. “This felt like a true last day of the season game for all the marbles. It had that intensity.”