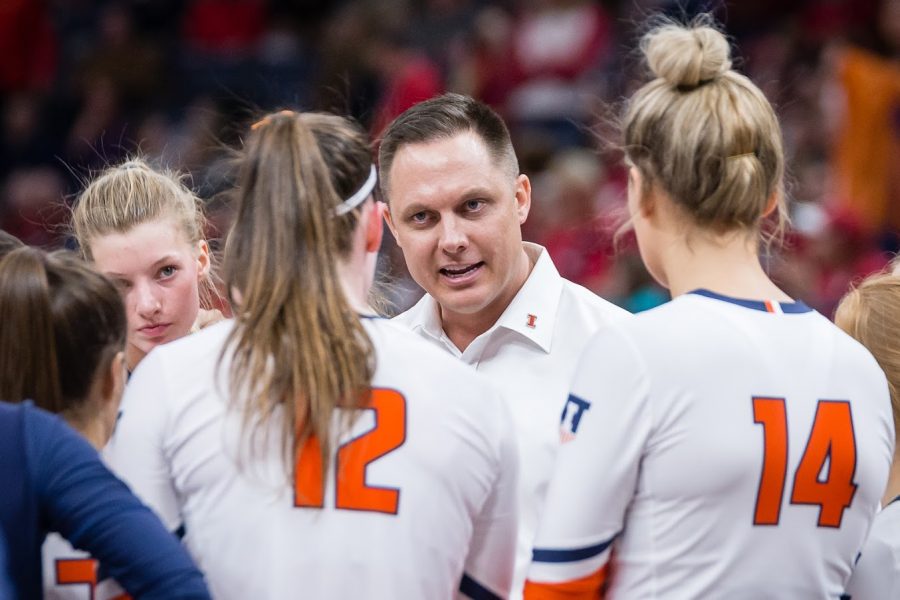 Illinois head coach Chris Tamas talks to his team during a timeout in the match against Nebraska in the Final Four of the NCAA tournament at the Target Center on Dec. 13, 2018. Illinois will have its home opener today against Wisconsin at Huff Hall.

Illinois volleyball will have its 2021 home opener at 3 p.m. on Friday, hosting No. 1 Wisconsin for a doubleheader, with the second match scheduled for 11 a.m. on Saturday.

While only Illinois’ second opponent, Wisconsin may prove to be their toughest of the season given their number-one ranking. They have continuity on their side when compared to the youthful Illini team, as the Badgers has retained most of their talented roster from last season. Wisconsin also comes into the weekend with momentum after rattling off back-to-back 3-0 trouncings of No. 13 Purdue.

“We know they’re a good team,” said head coach Chris Tamas. “They returned three, four All-Americans, all-conference players. They’ve got all kinds of match experience. They’re big, they’re physical. Not unlike other teams in this conference too, though. We just talked about it in terms of this is a good chance to learn what we’ve been training. Again, we’re under that pressure. We wish we had fans in the stands to help us along, but we’ll be prepared as well as we can be, and hopefully we’ll give them a run.”

Wisconsin has the potential to be a nightmare matchup for Illinois, as they boast highly accomplished players along with unparalleled height in players such as 6-foot-8 middle blocker Dana Rettke. With Illinois’ roster all being 6-foot-4 or less, Tamas will have an interesting quandary as far as how to combat the height of Wisconsin.

No fans will be allowed to attend home matches this season, taking away a bit of Illinois’ typically strong home advantage from the large crowds at Huff Hall. There is, however, the potential for pumped-in crowd noise if the players would like.

“Iowa did (pumped in noise) last week,” Tamas said. “I’m indifferent about it. If the team likes it, then great. If they don’t, then that’s fine, too. I think there’s a decibel level that we can go up to. We did it as a practice run; it was just background noise to me. If it works out that the players love it, then great. We can do that, no issue”

While Wisconsin may project to be a largely difficult matchup, Illinois doesn’t seem to be too intimidated, as they will also enter the match at 2-0 and, according to Tamas, have approached preparing for Wisconsin the way they would any other opponent.

“They’re a great experienced team,” said redshirt freshman Ellie Holzman. “Big players and great servers, so we’re ready to just get after it and see what we can do against them. We’ve been preparing, and we have a lot of work to do but I’m excited to get a crack at them.”