Three perfect wrestlers remain for Illini along with 4-0 start 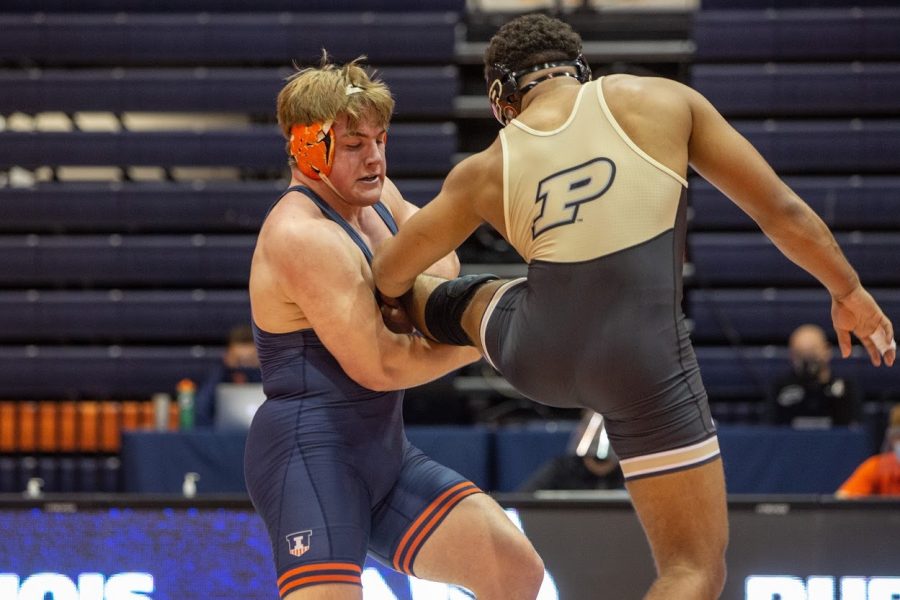 Sophomore Luke Luffman grabs the leg of his opponent during the meet against Purdue on Sunday. Luffman, along with Lucas Byrd and Dylan Duncan are undefeated so far this season.

The Illini men’s wrestling team is 4-0 this season and one of the most dominant sports teams at Illinois. To go along with the team’s perfect start, three wrestlers on the squad have not lost a match this year: sophomores Luke Luffman and Lucas Byrd are 4-0, while redshirt senior Dylan Duncan is 2-0.

Duncan has missed two matches this season but remains undefeated. He credits the success to the work he and the team have put in so far.

“A big part of me going 2-0 and the other guys going 4-0 is how hard we have been working in the room,” Duncan said. “I feel like we sometimes don’t realize the great things we have accomplished because everyone surrounding us is doing the same thing. When we step on to the mats, we are always ready.”

Byrd says his teammates give him the motivation to go out and compete.

“It’s all molding together, and we’re becoming a family,” Byrd said. “Being surrounded by guys that know what it takes to win and watching them come to practice puts it in my mind that I belong here. I really just like to have fun. Every day is an opportunity to get better.”

Being such important members of the team, Byrd and Duncan both know they need to take care of their bodies on and off the mats. A small injury could quickly end one of their seasons.

“I take time off when we get the time off, and I never push myself too hard to avoid injury,” Byrd said. “With a short season like this, one injury could really end it for you for the year.”

Illinois will get ready to face the top-ranked Iowa Hawkeyes this weekend in Iowa City. The matchup was supposed to be a tri-meet with the No. 2 Michigan Wolverines, but positive COVID-19 cases restricted them from entering. The Illini are currently ranked No. 7 in the country.

Regardless of Michigan’s absence, Illinois is fully focused on Iowa this weekend. Byrd is optimistic about the matchup between the two teams.

“I’m excited to go out there and see where I stand with the top guys,” Byrd said. “I’ve always thought I was a top contender, and I still think that, so I’m ready to go showcase what I can do. It’s gonna be a tough meet all-around, and we’re ready to see who’s gonna step up to the plate and who still needs to work on some things before Big Tens and Nationals.”

Byrd and Luffman will try and move to 5-0 and Duncan will look to improve to 3-0 this weekend, with the match taking place at 11 a.m. central time and can be watched on Big Ten Network.