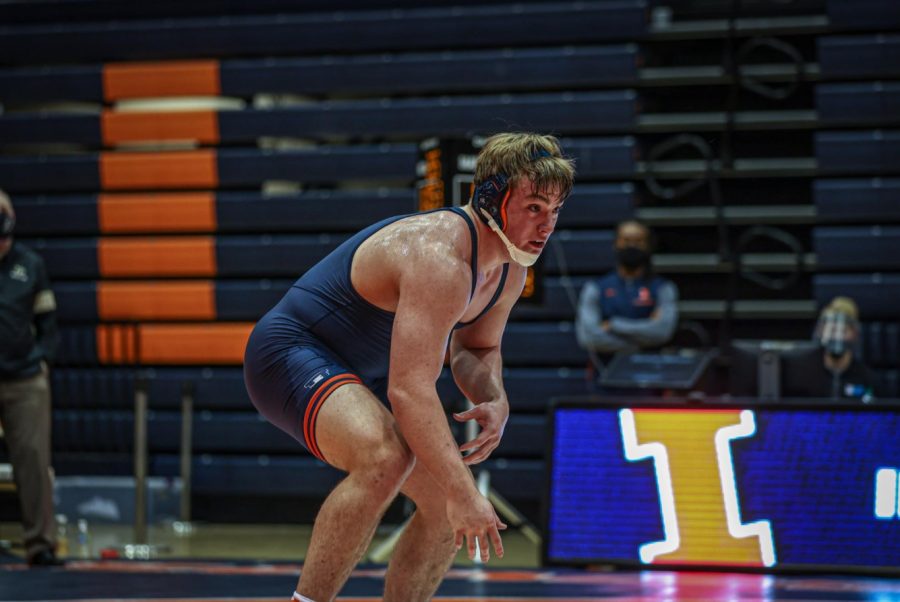 Sophomore Luke Luffman prepares to wrestling during competition. Luffman is one of four Illinois wrestlers who are undefeated so far this season.

The Illinois men’s wrestling team is set to take on the No. 1 ranked Iowa Hawkeyes this Sunday in Iowa City. The Illini are off to a great start this season at 4-0, and will be put to the test this weekend. The meet will take place at 11 a.m. Central Time and can be watched on Big Ten Network.

The Hawkeyes are 2-0 to start off the season and are coming off a blowout against the Minnesota Gophers last weekend, defeating them 35-4. Illinois is 26-56-1 all-time against the Hawkeyes.

Illinois continued its perfect run last weekend as it defeated the Purdue Boilermakers in a close match that came out in Illinois’s favor. A win this weekend could push the Illini into the top five rankings. They are currently ranked No. 9.

The Illini have defeated three top 25-ranked teams in three consecutive weeks. This hot streak has the team at 4-0 for the first time in five years.

The Illini have six wrestlers ranked in the top 25 among various websites. Illinois also has four undefeated wrestlers on their squad: Danny Braunagel, Lucas Byrd, Luke Luffman and Dylan Duncan.

Iowa has all 10 projected starters ranked in the top 10 of their respective weight classes.

While the Hawkeyes are the No. 1 ranked team in the country, redshirt senior Dylan Duncan and the rest of the team knows what is coming and are pretty optimistic about the weekend.

Sophomore Lucas Byrd is excited to see where they stand with the Hawkeyes.

“I’m excited to go out there and see where I stand with the top guys,” Byrd said. “It’s gonna be a tough meet all around, and we’re ready to see who’s gonna step up to the plate and who still needs to work on some things before Big Ten’s and Nationals.”

Next up for the Illini is the Minnesota Gophers in Minneapolis. The match will take place on Friday.