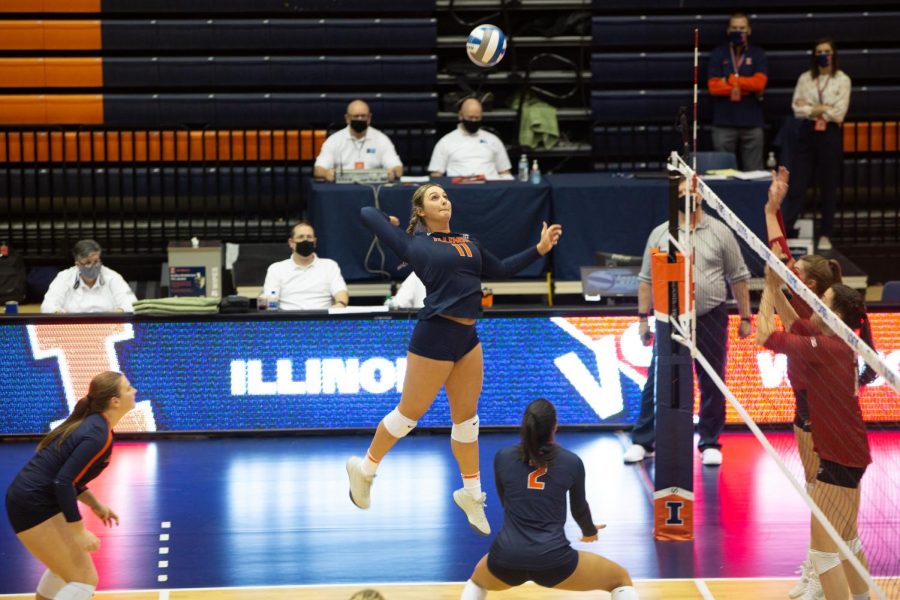 Redshirt freshman Ellie Holzman winds up to spike the ball during the game against Wisconsin on Friday. The Illini lost their two matches against the No.1 ranked Wisconsin 3-0 and 3-1 this weekend.

Illinois lost its first two home matches of the season on Friday and Saturday to No. 1 Wisconsin by 3-0 and 3-1 margins, respectively. Huff Hall was virtually empty, with just the players, coaching staff, and referees on the court and some cardboard cutout fans in the crowd.

On Friday, Wisconsin led throughout most of the match, winning the first set 25-20. The second set was the biggest fight Illinois put up, narrowly losing 30-28. Illinois played its best volleyball in this set, and it seemed to serve as a bit of a blueprint for their play on Saturday.

“I feel like we were really scrappy,” said sophomore Riley Hinton regarding the second set. “I feel like we didn’t let many balls hit the floor, especially at the end of the game when rallies were getting long. We minimized our errors. We were kind of swinging away. We blocked well. We hung really well on the rallies and that was good.”

In a close set like that, having a home crowd at Huff Hall might have had the potential to make a difference. Players across the roster have said they’re focusing the same as usual without fans, but it’s easy to wonder if a home crowd would have made it harder for Wisconsin to pull ahead.

After that second set, Illinois seemed to unravel, losing the third set 25-9. This was Illinois’ worst loss so far this season. The loss, however, seemed to inspire the Illini to come back better on Saturday.

“We’ve already said off the bat that this cannot carry into tomorrow (Saturday),” said Hinton. “Tomorrow is an entirely new day. We hung with them really well the first two sets and we showed that we can compete with this team. We just need to fix a few things here and there.”

Between Friday and Saturday, it seemed as though the Illini changed a lot. For one, Bruna Vrankovic drew the start on Saturday and was impactful throughout the match, ending up with 10 kills on the day. Although the end result was still another loss, Illinois had more energy and consistency throughout the first three sets, not giving away a blowout loss until the fourth set this time.

“I feel like we played great,” said sophomore Kennedy Collins. “We had fight. Going into today’s match, I didn’t have real doubt that we were going to lose to Wisconsin. I just know that our team has that fight mentality. I know that we fought hard today.”

In their first set, the Illini fought back and forth and ultimately lost a close one 27-25. On Friday, Illinois seemed to cave in after losing a tight second set. When a similar situation appeared on Saturday, the team buckled in and remained competitive.

The Illini lost the second set 25-20, but the biggest loss came in the form of an injury to redshirt freshman Ellie Holzman. She had been having a breakout season so far this year and was poised to make a major impact today, but went down early in the second set with a right leg injury.

Fortunately, this is the opposite leg from the injury that kept her out last season, but the severity of the injury is currently unclear. If she is out for an extended period, things could bode poorly for the Illini.

After being impacted a bit by the injury to Holzman in the second set, Illinois came out quickly in the third set. The team seemed to coalesce, with contributions coming from everywhere. From Vrankovic having a dominant string of kills to Kylie Bruder sneaking in a fake set for a kill to Megan Cooney coming up with big kills at the end, it seemed that the whole team was playing together in a way they haven’t yet this season.

The Illini came away with a 25-21 win to cap off possibly their best string of play so far this season. Unfortunately, the momentum wouldn’t last as they came out lethargic in the final set, losing 25-12. Going forward, keeping energy late into matches will likely be a point of emphasis, as the Illini seemed to slow down as Friday’s and Saturday’s matches wore on.

“We just played the number one team in the country,” said head coach Chris Tamas. “They’re every bit of it. We talked a lot about after last night’s game that we just have to have confidence in what we can do. We’re capable of playing good volleyball. We just gotta keep grinding away. Keep learning how to play in big moments. I like a lot of the big things that we did. We’re able to frustrate from the service line and we’re able to stay in a lot of good rallies. Good to see on a lot of fronts, but we’ve got to learn to play a whole match.”