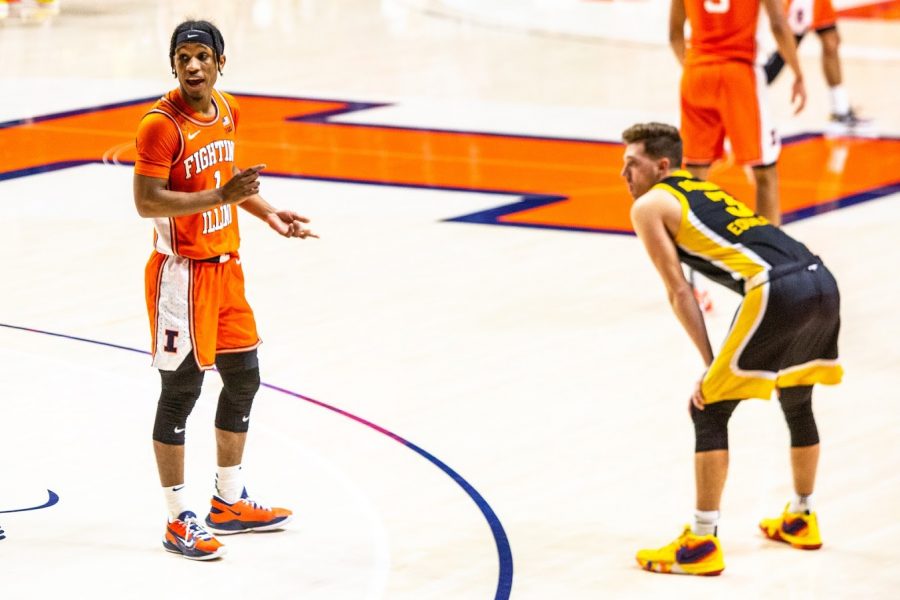 Senior Trent Frazier yells out to a teammate during the game against Iowa on Friday. The Illini won the game 80-75.

Coming into Friday night’s showdown with the No. 7 Iowa Hawkeyes, the Illini didn’t have a signature win. A win at Cameron Indoor against No. 10 Duke doesn’t look as good at this point in the season, and the 27-point win over then-unranked (now-No. 21) Minnesota was the team’s biggest result of the season.

But the Illini got the job done against Luka Garza and the Hawkeyes, narrowly winning 80-75 thanks to three big performances from junior Ayo Dosunmu, senior Trent Frazier and redshirt junior Jacob Grandison.

Illinois has struggled with slow starts this season, often needing big second-half performances to give the team a chance. Tonight, however, the Illini came out flying despite not playing for 10 days, using a high-paced offense and energetic defense to set the tone early.

Coming into Friday night’s game, everyone knew we would see two of the best big men in all of college basketball duke it out in Garza and Cockburn. But Cockburn was basically non-existent in the first half, scoring just one point while picking up two personal fouls, while Garza came to play, notching 13 points.

The second half was a different story. Cockburn found space in the paint and forced Garza into tight defense, leading the Hawkeye senior to get into foul trouble. With Garza on the bench for several key periods in the second half, the Illini were able to take advantage of the Hawkeyes without their premier player.

Cockburn also improved tremendously defensively after the break, holding Garza to just six points in the second half while also making a crucial steal in crunch time with under a minute to play. As we saw in the second half, Illinois will need Cockburn to stay out of foul trouble and find space in the paint if the team has any shot of being successful in the postseason in March.

Over the last five games, Dosunmu shot just 6-for-36 in the first half, often needing over 20 minutes of play to find his groove offensively. Tonight, the Chicago native came out flying, scoring 19 first-half points to help set the tone for the Illini before finishing with 25 points and four assists. He also shot 100% from beyond the arc, converting all three three-point attempts.

We all know that Dosunmu opted to return to Champaign for a third season and remove his name from the 2020 NBA Draft, voicing his desire to help lead the Illini toward a deep postseason run in March. That energy and passion was evident on Friday, as he was a vital presence on both sides of the ball to get the Illini a signature win to help secure the team’s position near the top of the Big Ten standings.

It was a near-flawless performance for the junior guard on Friday night, and we can all agree that the Illini likely would not have won the game if Dosunmu had an off night. Thankfully he got the job done, and the Illini picked up a top-10 win on their home court.

After coming off the bench in each of his first 13 appearances this season, Grandison got his first start of the season in Illinois’ last game against Penn State on Jan. 19 due to the recent struggles from senior Da’Monte Williams (more on that later). On Friday, head coach Brad Underwood opted to give Grandison his second start, and it looks like he will continue to start in the future after notching his first double-double at Illinois with 11 points and 10 rebounds.

Grandison made his presence felt on both offense and defense, constantly finding good looks when the Hawkeyes focused their defensive efforts on Dosunmu and Cockburn. On the defensive side of the ball, Grandison forced two steals, including one off an inbound pass in the first half that led to an easy Frazier layup.

But his biggest contribution came with just over two minutes left to play, draining a three-pointer to put the Illini up by two, and they never looked back. If the Illini can get productive performances from players other than just Cockburn and Dosunmu, look out because they will certainly be a threat in the postseason.

Miller’s freshman campaign has been a roller coaster ride, as inconsistent performances have plagued him from being a dominant college player. Friday just wasn’t his night, as Miller finished with zero points for the third time this season, including going 0-for-3 on three-point attempts.

Defensively, Miller was a liability at times and got caught flat-footed on multiple occasions, leading to open three-point looks from Iowa wings. You just can’t do that against one of the best shooting teams in all of college basketball, and they made the Illini pay, making 10 three-pointers on 40% shooting.

The Illini are going to need Miller to find his groove offensively if the team wants to make a postseason run. Though tonight’s win proved he doesn’t need to contribute if the team wants to be successful, Miller needs to be more involved or teams could punish the Illini down the stretch on both sides of the ball.

What. A. Game. What else is there to say?

After scoring 13 points against Penn State last week, Frazier had one of his best games of his Illini career, scoring a season-high 24 points while also grabbing four rebounds, including a defensive one with 21 seconds left to set up two free throws, which he successfully converted.

Like Dosunmu, Frazier had an essentially perfect game, going 4-for 9 from three and 9-for-13 on all field goal attempts. The Illini have struggled with free throws all season, but Frazier made all four of his attempts tonight, including two that put the team up by two possessions in the final minute of play.

Frazier also completely shut down Iowa guard Jordan Bohannon, who didn’t score a single point in the first half. A desperation circus shot that somehow went in as the shot clock expired near the end of the first half summed up Frazier’s magical performance, helping bolster his already impressive Illinois legacy.

Known for his swift, unpredictable passes into Cockburn and impressive handles that (sometimes) get him out of trouble, Curbelo is one of the most impressive freshmen in all of college basketball. In one of the biggest games of his collegiate career thus far, however, the Puerto Rico native didn’t really play a major role, though he did score eight points and rack up eight assists.

His three turnovers almost cost the Illini, including a five-second inbound violation with 11 seconds to go with the Illini up by three, but the Hawkeyes would miss their subsequent three-point attempt. Had that three-pointer gone in, the game likely would have gone to overtime, and who knows what would’ve happened then.

Curbelo is definitely finding his groove with this Illini squad, but tonight just wasn’t his finest performance.

With Cockburn in foul trouble and on the bench for long stretches in the first half, the Illini turned to Bezhanishvili, who played for nearly 10 minutes prior to halftime. Illinois is a team that relies on having a big man in the paint who they can feed and rely on to score layups or easy floaters. Tonight, the junior was completely outplayed by both Garza and backup center Jack Nunge, who also saw his fair share of playing time when Garza was in foul trouble.

Bezhanishvili finished with three points, two turnovers and two fouls while shooting 1-for-5 on his field-goal attempts. The Georgia native often tried to force shots that weren’t there while being guarded by bigger, stronger opposition, leading to blocks or bad shots.

As a veteran player on this Illini team, Bezhanishvili needs to recognize mismatches and distribute the ball to other players, who likely have better looks. Tonight wasn’t Bezhanishvili’s night, but thankfully Frazier and Grandison stepped up to help lead the Illini to victory.

After earning a spot in the starting lineup this season, Williams started the season off strong, getting over 20 minutes of game time in every game so far this season. Though he is known for his reliable defensive abilities, the senior guard has improved his offensive production this year, especially his three-point shooting, making roughly 60% of his attempts from beyond the arc.

Over the last four games, however, Williams has been off his mark, making a combined one three-pointer during that stretch, including going 0-for-1 against Iowa on Friday. And it isn’t like he’s getting tough looks; he finds space and gets open looks but can’t get his shot to fall.

Williams also struggled defensively against the Hawkeyes, while committing two fouls and turning the ball over twice, both of which occurred across a span of just over one minute of play early in the second half. His lack of discipline and conversion on offense and defense is essential for the Illini going forward, and the team needs to hope he finds his early-season form going forward or he will likely see a drastic reduction in his playing time.