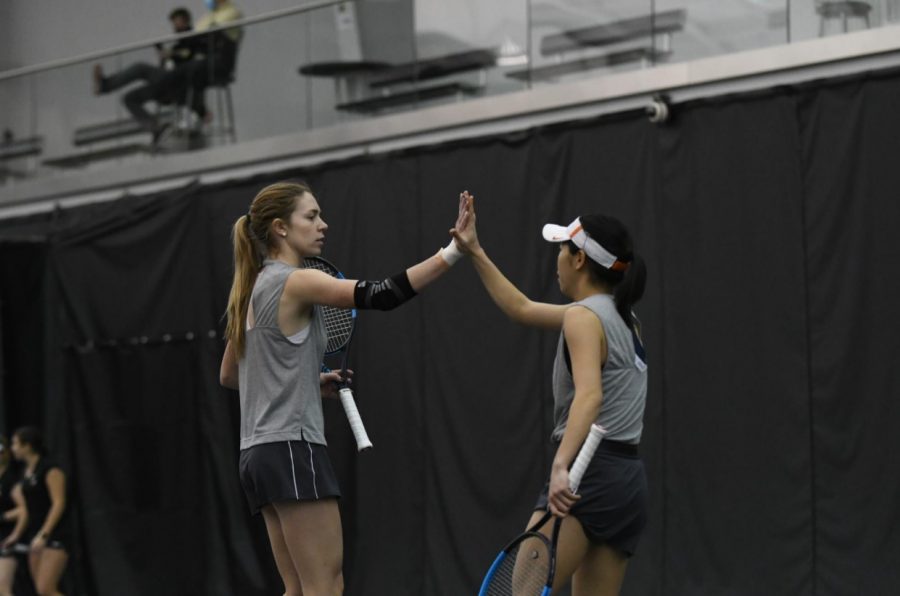 Members of the Illinois women’s tennis team high five after scoring a point during the Purdue invite this weekend.

Three players had an undefeated weekend in singles play: sophomores Emily Casati, Josie Frazier and Ashley Yeah, while Frazier and senior Asuka Kawai won two of their three doubles matches. Kate Duong, the only freshman on this year’s roster, made her Illinois debut, picking up her first collegiate singles and doubles wins against Michigan State on Saturday.

“They’ve been training really, really hard and it’s almost been a month now, so they’ve made some really good steady progressions and improvements, all of them,” said head coach Evan Clark. “The good thing is that they (Frazier, Casati and Yeah) went 3-0 this weekend, but they’re far from playing their best tennis, which is a good thing to see.”

Prior to this weekend, the team’s last meet was on March 8 against Purdue, who also happened to be the first team they played this weekend. After 11 months between competitive matches, the team make great strides in terms of both maturity and performance, according to Clark.

Against Purdue on Friday, four Illini players got their first singles wins of the season, with senior Emilee Duong, Frazier, Casati and Yeah all winning their matches in two sets, while Kawai and Frazier picked up their first, and the team’s first, doubles win of the season.

Though none of the matches the Illini played were dual matches, Emilee Duong says it still felt like it due to the energy and atmosphere created by her teammates.

“Even though it technically wasn’t a dual match, it definitely felt like one. Everyone was competing hard and supporting the same way that we do if we had in conference matches,” Duong said. “Even though it’s great to have fans there, I really rely on my teammates for the most part to create that energy and that atmosphere that makes it very fun to compete in for my team.

“I totally forgot there was nobody in the stands because the atmosphere was so great from my teammates.”

Expectations are sky high for Emilee Duong, who is entering her senior season with the Illini. After admitting she is happy with her and her teammates’ performance after almost 11 months off, Duong thinks the team will exceed expectations this year.

“Going in Coach had told us that expectations for our first matches in 11 months, they weren’t as high as they usually were, but we proved him wrong for sure,” Duong said. “We proved to him that he should raise his expectations no matter how much time we’ve taken off from competing at this level. I feel like we’re taking really big steps toward being comfortable with competing against other high-level teams.”

Despite the tough end to an otherwise solid weekend given the lengthy break between matches, Clark is satisfied with his team’s overall performance and grateful to be on the court again.

“It was an incredible feeling,” Clark said. “Once we got out there and started playing I think we were all kind of in awe of being there again because it’s been so long. We’ve been low on reps, low on matches and we weren’t sure what to expect, but they did a great job with handling everything for an overall great weekend.

“I’m really happy for our kids to be back on the court.”