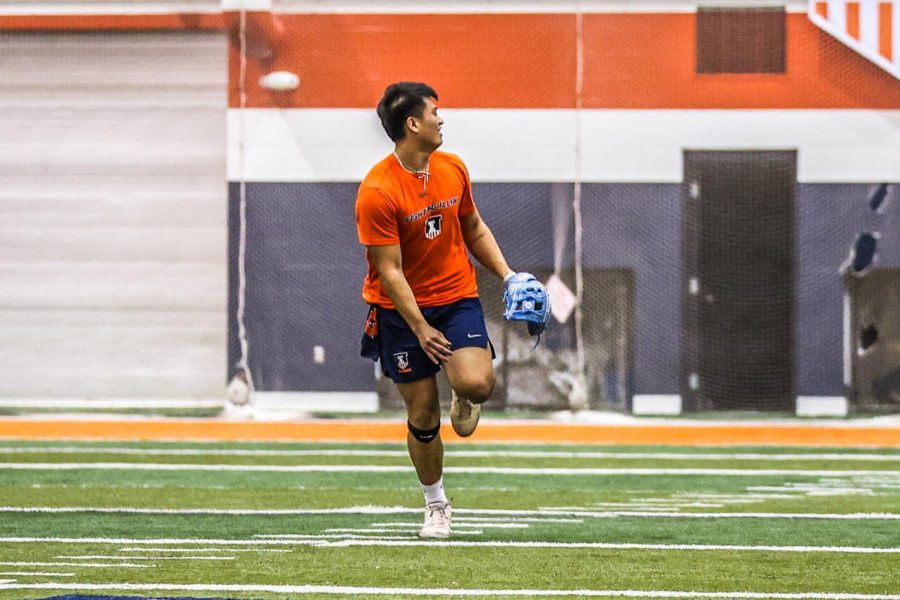 Infielder Branden Comia runs back for a catch during practice on Jan. 14 at the Fighting Illini indoor training facility.

Ten months after an abrupt ending to its short-lived season, the Illinois baseball team started full team practice on Friday in preparation for the 2021 season. As of now, the Illini are limited to conference-only games and are hopeful to begin competition in early March.

While the Illini don’t have a schedule yet — and probably won’t for a few more weeks — head coach Dan Hartleb understands the conference is dealing with more pressing matters in terms of scheduling and COVID-19 outbreaks. Right now Hartleb is just excited to have some human interaction with his team.

“It’s been really nice,” Hartleb said. “This group has been through so much. You look at spring sports where you lose a season last year then going through everything with COVID in the fall. One day we’re practicing, one day we’re not. Then you’re in small groups, then with the whole team. It’s been a whirlwind.”

The Illini were 13 games into their season (8-5) before the pandemic hit and had won three of their last four games, finally hitting their stride before Big Ten play. Their resume was looking strong as they notched two wins over ranked teams — Texas A&M and Oklahoma State — early on in the year.

Junior shortstop Branden Comia was on a tear of his own to begin the season, hitting .426 with three doubles, two triples, two home runs and 10 RBIs. Comia’s short success as a sophomore, combined with a consistent freshman year, earned him a spot on the preseason All-Big Ten team by Perfect Game. Sophomore catcher Ryan Hampe was also selected for the honor.

Comia isn’t focused on his individual success or honors but on getting back to work with his teammates and preparing for an unpredictable and difficult season.

“One word to describe what we’ve been doing since we’ve been back is really a ‘grind,’” Comia said. “Before we were able to start practice, we were in the weight room five days a week. We were hitting that pretty hard, it’s been a grind.

“It’s a little weird because we’d be pretty deep into practice now in a normal year. But it’s good because the practices pushed back will just help guys not lose their drive or lose that fire or passion to come to practice every day and give it their all.”

Adding to the grind of everyday practice or lifts is the uncertainty of the season. During a normal season, Hartleb lays out a plan for the entire fall or spring and follows it pretty strictly with the team. Now, Hartleb is operating on a day-to-day basis as his plans depend on test results and conference rules.

Because only 13 Big Ten schools have baseball programs, the schedule will look a lot different this season, as they can’t go head-to-head with teams as someone would always do on a bye. Hartleb said there might be weekends where three or four teams are competing at one site in a round-robin style or mid-week games with opponents of driveable distances.

But no matter when or where the Illini end up playing this season, Hartleb is confident in his guys to adapt and find success, hopeful to pick up right where they left off about a year ago.

“Everybody’s hungry to play,” Hartleb said. “As we’ve had opportunities to scrimmage a little bit you can see the guys are hungry to play and compete. Guys are excited about this season … Our guys will jump into the season, they’ll get on the field, put everything behind them COVID-wise, compete at a high level and it’ll bring a smile to their faces.”