Illinois’ perfect run comes to an end in loss to No. 1 Iowa 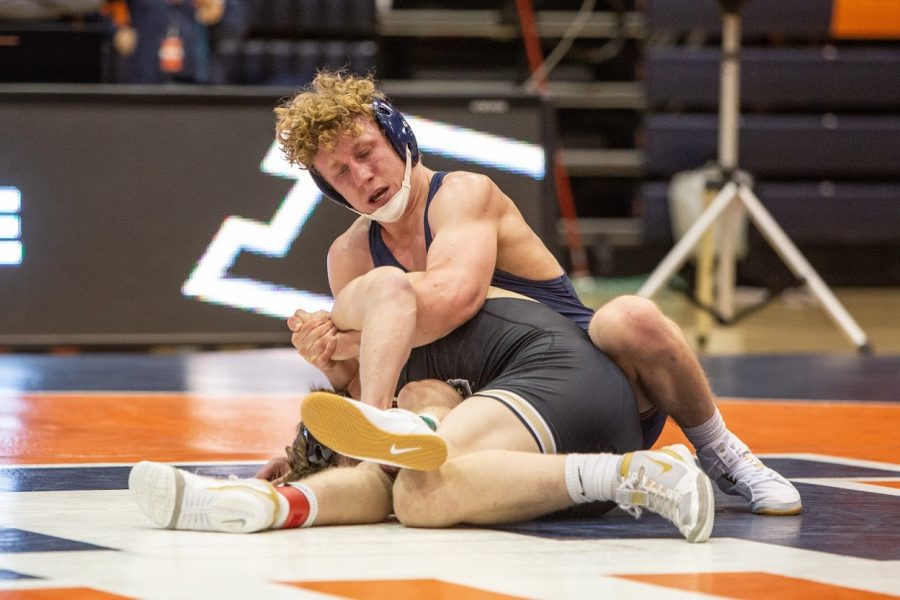 The Illini men’s wrestling team suffered their first loss of the season to the Iowa Hawkeyes on Sunday. The No. 9 ranked Illini were defeated 36-6 as they move to 4-1 on the season. Freshman Luke Odom and redshirt sophomore Zac Braunagel picked up victories in their matches.

In the first match of the day, redshirt sophomore Justin Cardani was defeated early giving the Hawkeyes a 6-0 lead.

Lucas Byrd was defeated for the first time this season as he moves to 4-1. The sophomore would lose by major decision, giving Iowa a 10-0 lead early in the afternoon.

“They’re a tough team,” Byrd said. “When they hit you, they don’t like to be hit back. Iowa is just one of those teams who’s gonna be really hard to beat for the next couple of years. I think it’s hard to say we need to do better as a team. There are a bunch of individual things that we gotta work on.”

Byrd, who competed at 133 pounds, thought the team was not out-conditioned. He thinks the Illini are in great shape.

“As a team, we are very strong, and we have good conditioning,” Byrd said. “Iowa is one of those teams that run people into the ground. I don’t think they out-conditioned us. They scored more points than us.”

Senior Dylan Duncan lost his first match of the season as well, losing by fall to Iowa’s Jaydin Eierman. Duncan will now move to 2-1.

Redshirt senior Mike Carr, who was competing at 149 pounds, was taken down late in his match which gave his opponent a 3-1 lead for the remainder of the match. Illinois would then trail 19-0.

Freshman Luke Odom had several takedowns in his match this afternoon, eventually giving the Illini their first victory of the day and first points. Odom defeated Iowa’s Joe Kelly in the 165-pound bout. Odom moves to 1-1.

Later on, sophomore DJ Shannon faced off against Iowa’s top-ranked Michael Kremer in the 174-pound bout. He would be defeated 10-2 in a major decision.

Redshirt Sophomore Zac Braunagel defeated his opponent 3-1 in a thrilling overtime match. This was the second win of the day for the Illini.

Junior Matt Wrobleski took on Iowa’s Jacob Werner in the 197-pound bout. He would be defeated by major decision 13-4.

To wrap up the day, sophomore Luke Luffman went up against Tony Cassioppi in the HWT bout. He would be defeated by fall to end his undefeated season.

The Illini will take on the No. 15 ranked Minnesota Gophers on Friday. The match will be streamed on Big Ten Network + and the start time has yet to be announced.