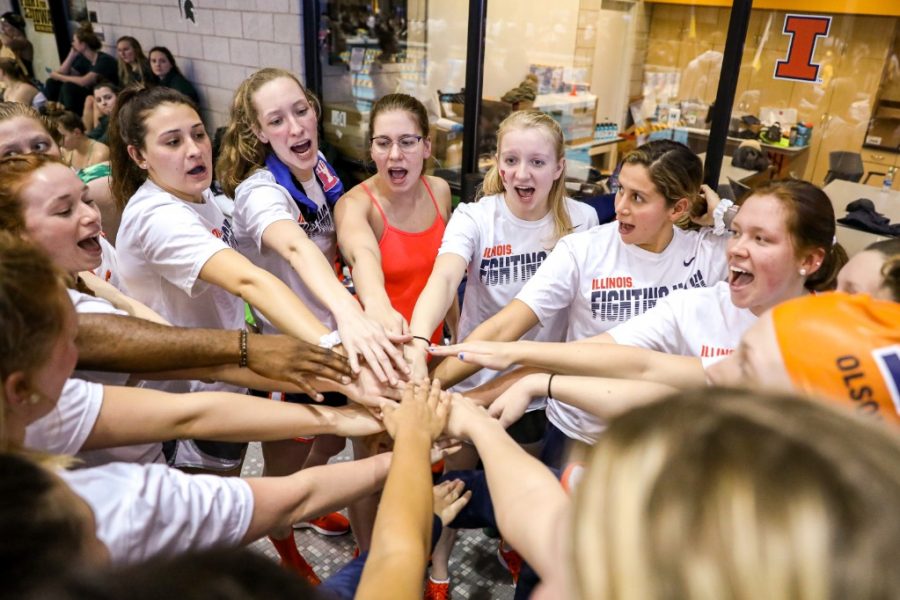 The Illini swim & dive team finishes a huddle during the 2020 Big Ten Championships on Feb. 26. Assistant coach Elliott McGill has helped the team keep morale up during this shortened season.

This abbreviated 2021 season is certainly the first of its kind for many Division I sports. There have been adjustments to the way sports compete this season to help mitigate the spread of COVID-19.

The pandemic has forced the women’s swim & dive team to only compete against Big Ten opposition across just four weeks of competition. The Illini’s record on the season currently stands at .500, with their first win coming against Nebraska on Jan. 23, 164-136.

Assistant coach Elliott McGill is entering his fourth season as a member of the coaching staff and understands many athletes are going through extremely difficult times, stressing how important it is to listen to your athletes.

“If they’re having rough stretches you have to be willing to adjust your training, or you have to be willing to maybe explain what you’re trying to do for the short-term and long-term goals,” McGill said. “The more you’re willing to listen, work and collaborate with them and give them that ownership and feeling that they’re a part of the process, I think it gives them something to control when (their) lives are out of their control.”

On top of listening, McGill also mentioned how important it is to be flexible with athletes’ training and breaks during the season. He also points out how the coaching staff decided to cut back significantly on the team’s double practices since classes resumed and no competitions were scheduled for the team this week.

“We’ve balanced giving them some flexibility and some space to be around family or adjust their trainings based off of their needs. We’ve ebbed and flowed as we’ve had to deal with things,” McGill said.

As a former student-athlete swimmer at Eastern Illinois, McGill acknowledged this season’s situation and struggles is something he really can’t relate to with the swimmers on the team, but his experience with trying to be the best student and best athlete possible has helped him connect with the team.

“I’ve strived as a coach to understand that our student-athletes are students and people first,” McGill said. “It’s more important that I provide them an opportunity to grow through college and grow in life just as much as I work with them in the pool. As a coach, I’ve tried to bring in a lot of balance to their life and helping direct them through college. I think when you have that balance it allows you to work really hard in the pool, and when you work hard you improve.”

Illinois had a week off from competition this week, with the next meet scheduled on Feb. 6 in Madison, Wisconsin, where they will face off against Wisconsin and Northwestern before competing in the upcoming Big Ten Championships.

This week is extremely important for the health of a lot of swimmers on the team, as it does more than relaxing and recovering, according to McGill.

“It’s also really helpful for your mind to be able to take a deep breath, enjoy being a student and being home for a weekend inside your apartment or inside your dorm with your friends versus isolating on the bus and hotel rooms as we travel,” McGill said. “There is a physical recovery and a brief mental recovery before a competition that is beneficial for anybody.”

Freshman diver Taylor Michael acknowledged that being locked away in rooms to quarantine has been a rough adjustment, but she points to the comradeship with her teammates as a major boost to help her get through the isolation.

“They’ve been telling me to stay positive because these are really hard times and not to be too hard on yourself because we aren’t getting as much training as we would’ve gotten in a regular season,” Michael said. “It has helped me a lot.”