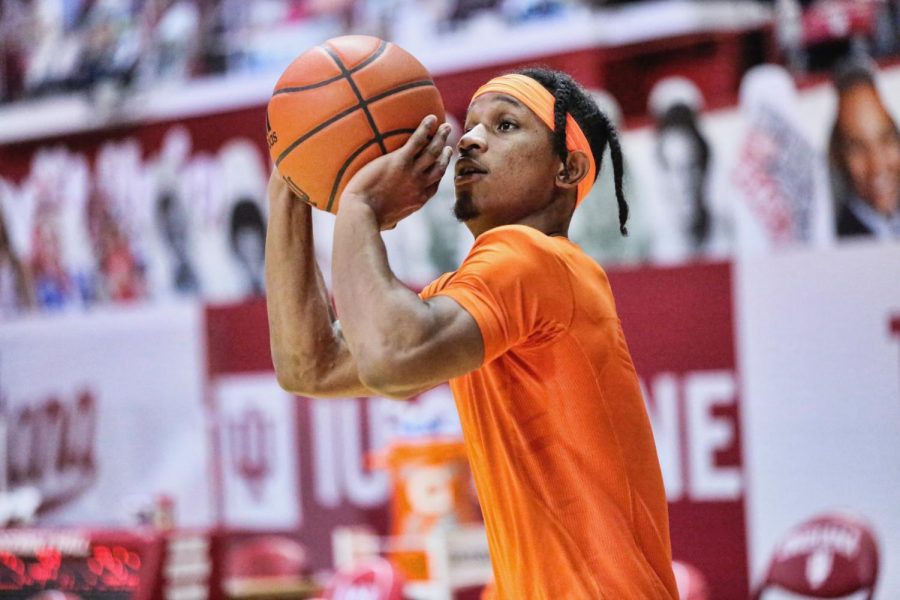 Trent Frazier shoots in warmups before Illinois’ game at Indiana. The Illini won 75-71.

Bloomington, Indiana — After an 87-81 loss to Ohio State, Brad Underwood had one message to his team: we have to stop riding the emotional roller-coaster.

Illinois seemingly turned in two of the better performances of the season, resulting in a domination of Penn State and victory over then-No 7. Iowa. But then came the next big question — how does Illinois respond to a big win? Would they continue that upward trajectory, like a team poised for March success? Or would they continue to ride the roller coaster and falter?

Without star guard Ayo Dosunmu for the overtime period, it looked like the ups and downs would continue. But the Illini locked in on defense and made enough free throws to complete the season sweep of Indiana, 75-71.

“At the end of the day this game could resonate a lot because we didn’t have him,” Underwood said of playing without Dosunmu. “We just had a little better flow. It was that and for guys to step up and make free throws…all in all it’s nice to win when you’re All-American doesn’t have it that night.

As expected the two neighboring state rivals played a tight first half, consisting of multiple runs. The Illini used an 8-1 run to climb out of a 14-9 hole, capitalized by an Adam Miller three to get a 17-15 lead. Indiana then scored seven unanswered, on five points from junior forward Race Thompson to get the lead back to five. Thompson was a difference-maker for the Hoosiers on Tuesday. After scoring just four points in their first matchup, he went for 18 points and eight rebounds in Bloomington.

Illinois regained the lead and looked like the team they had the last two games — Dosunmu getting to the free-throw line, an Andre Curbelo transition bucket, and a Kofi Cockburn layup inside — but the Hoosiers wouldn’t quit. They finished the half on a 13-3 run, spurred by two monster slams from Trayce Jackson-Davis and a mid-range jumper by the sophomore at the buzzer, giving Indiana a 41-34 lead.

“It was the first time in a while I had been really really upset with my basketball team at halftime,” Underwood said. “Giving up 41 points was not conducive to going to win on the road. Give Indiana credit, they were well prepared.”

Illinois has shown resilience before, and it used that same fire to battle back Tuesday night. The defensive intensity flashed early. Curbelo and Frazier each got a steal to convert a layup to cut the lead to two. Illinois would score seven straight and get a 50-47 lead, its first since 3:15 in the first half. The Hoosiers, however, continued to grit out and wear down the Illini — a drastically different challenge than what Iowa presented last Tuesday.

“We just turned up in the second half,” Curbelo said of the team’s defense. “We came out with more energy, more passion. We came out and wanted to get stops, we got ’em.”

The Hoosiers continued to pound the ball inside, finishing with 30 points in the paint, 23-34 from the free-throw line on 26 Illinois fouls. On a pair of Armaan Franklin free throws, the Hoosiers took a 64-58.

With Dosunmu and Miller having off nights offensively, Frazier took it upon himself to get the team going. He drained consecutive threes to tie the game with 3:10 remaining.  The Hoosiers and Illini turned up the defense, with neither team scoring a field goal for over a two-minute stretch. Frazier was later fouled with 42 seconds left and drained both free throws to put Illinois up two. However, Armaan Franklin responded with a running layup to send the game to an extra period.

Without Dosunmu in the overtime period, the Illini had to rely on their defense and they did just that. The Hoosiers missed their first three shots of the period and struggled to pound the glass as they did earlier in the game. Illinois struggled to score as well, but a Curbelo to Cockburn pick-and-roll put the Illini up four with 19 seconds left. Da’Monte Williams sank a pair of free throws, and the Illini strutted off the Assembly Hall court victorious.

A month ago, Illinois was following big wins with a disappointing loss. Trailing by six with four minutes to go, they seemed destined for a loss. But the group rallied together, and while it wasn’t their prettiest win of the season, it may be one of their most important.