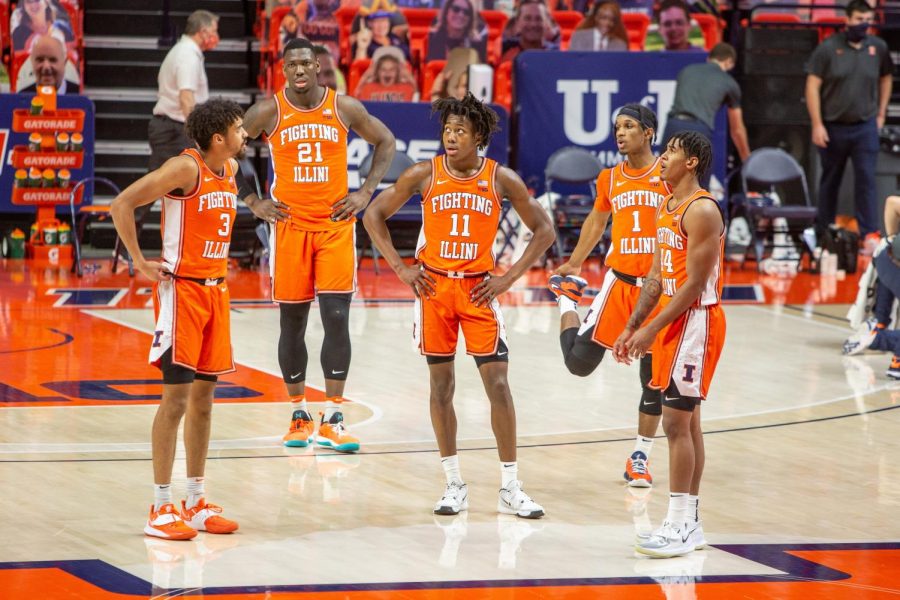 Illinois’ group of starters stand together during Illinois’ game against Penn State on Jan. 19.

In basketball, having a star player — a player who can bail you out and will you to victory when the odds are stacked against you — is often a trump card.

Illinois has that in Ayo Dosunmu, who’s had several key moments for Illinois in his 2.5 years in Champaign. But on Tuesday night, he could only sit and watch as his teammates were forced to play the overtime period without him. Dosunmu had fouled out for the first time in his career. It wasn’t pretty at all (the Illini shot just 1-4 in the extra period), but they were able to gut out the win, showing they’re more than just their star guard.

“At the end of the day, this game could resonate a lot because we didn’t have him,” head coach Brad Underwood said of playing without Dosunmu. “We just had a little better flow. It was that and for guys to step up and make free throws … all in all it’s nice to win when your All-American doesn’t have it that night.”

A big reason Illinois was able to withstand the Hoosiers was the play of Trent Frazier. Before Dosunmu debuted for Illinois, Frazier was the go-to scorer in 2017-2018. But with the Chicago native on board, Frazier had to settle into a secondary role. With Dosunmu having an off night, it was Frazier who returned to that primary scoring role. He drained two huge threes to tie the game at 64, en route to accounting for the Illini’s last 10 points of regulation. Illinois is now 7-1 this season when Frazier scores in double-figures.

“It’s nice to have great options and he was it,” Underwood said. “A guy who’s been in a lot of wars. He’s been in this building before. We’re almost shocked when Trent misses one now because he’s been on such a burner.”

Tuesday night’s contest was a stark contrast to the team’s win over Iowa on Friday. The Hawkeyes high-powered offense and uninspiring defense forced Illinois to have to win a shoot-out. The Hoosiers are the inverse of the Hawkeyes; a strong defensive unit lacking offensive juice. The Illini shot a season-low 38.6% from the field. But, they forced enough Hoosier stops and got to the line a season-high 32 times, finding a way to win.

“I thought we got great looks tonight, the ball just didn’t go in,” Underwood said. “It’s what I always preach. You gotta find a way to win when the ball doesn’t go in.”

The past two contests have shown Illinois can win without huge games from their All-American candidates Dosunmu and Cockburn, something they weren’t capable of doing earlier in the season. Before, they struggled to string together consecutive wins in key spots. But Frazier has stepped up as of late. On Friday, it was Jacob Grandison delivering as the third guy. Tuesday, Andre Curbelo had his moments.

That will need to continue on Saturday, as Illinois gets another unique challenge in Wisconsin. The oldest team in the Big Ten, the Badgers, rank No. 7 in defense on Ken Pom. They are 308th in pace nationally.

A few games ago the script for an Illini win was clear: play through Dosunmu and Cockburn and hope one of the role players steps up. But over the past few games, they’ve flashed that they are more than that. In March, it’s not always the best teams that win, but the teams that can win in the most ways. A single-elimination tournament against teams that play contrasting styles from different conferences preys on those that can’t adapt. The win in Bloomington showed that, for now, the Illini are doing what it takes to win.