Player grades: Frazier has another standout performance, Cockburn steps up in nail-biting win 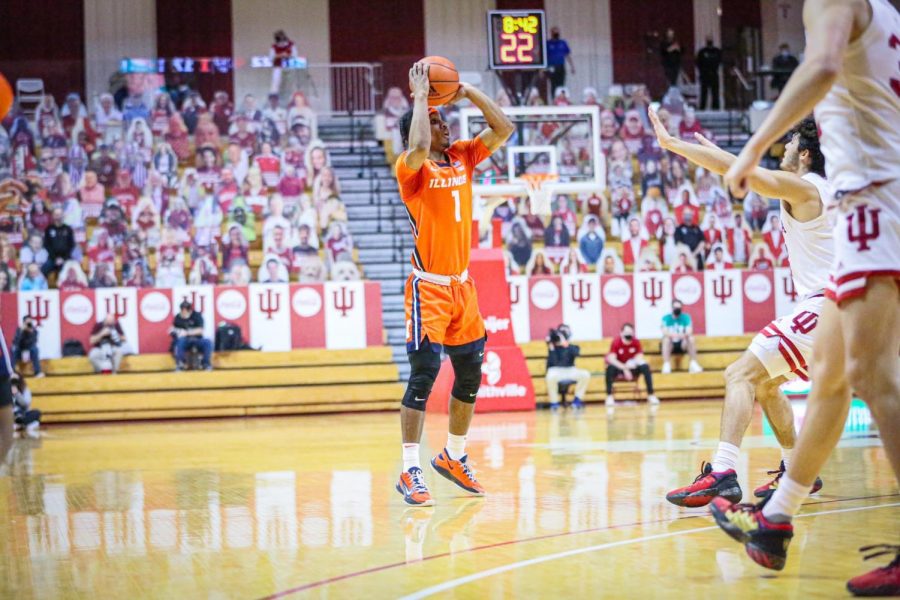 Trent Frazier shoots a three-pointer in Illinois’ win against Indiana on Tuesday. Frazier had another big game, scoring 19 points.

After one of the best performances of the season, Illinois looked slow and sluggish throughout the first half, and the team eventually entered halftime trailing by seven. Since the Illini typically find their groove in the second half of games, it seemed like it would be another one of those games. Though Illinois pulled out the 75-71 win, it wasn’t pretty, and they needed an extra five-minute overtime period to get the job done.

One of the most important talking points from the win has to be the fact that the Illini played the final seven minutes and 40 seconds without their best player, Ayo Dosunmu. After fouling out on a controversial charge with just under three minutes to play, the Chicago native was forced to watch the rest of the game from the bench. A late surge from senior Trent Frazier helped the Illini avoid upset at Assembly Hall, where the team hadn’t won since 2010, proving this squad is capable of grinding out results even without their star player.

Struggles on both ends of the court plagued the Illini throughout the game, but they made baskets and got stops when they needed them the most, a quality of a top college basketball team. Let’s take a look at eight key Illini performances from the nail-biting win.

Note: the referees will not be making an appearance in this game’s grades, but you can imagine what I thought of their performances. 54 total fouls in a rivalry game is absolutely absurd.

After being named Big Ten Player of the Week following his 25-point performance against Iowa on Friday, I’m sure many Illini fans had high expectations for the junior guard coming into Tuesday night’s late-night matchup with Indiana.

But Dosunmu didn’t show up to the occasion. The Chicago native finished with 10 points, tying a season-low (the other came against Minnesota in the team’s Big Ten season opener on Dec. 15), while also fouling out with three minutes to play. You can’t have the best player on the team in foul trouble late in close games, especially with the Illini up by just two points at the time of his disqualification. I understand the refs didn’t cut him any slack, but silly fouls earlier in the game are inexcusable at this point in the season.

Everyone has an off night every once in a while, but I expect better from a veteran player on this Illini team. A 2-for-11 night from the field (he went 6-for-6 on free throw attempts) illustrates the junior guard’s struggles, but Brad Underwood has to hope Dosunmu can put this game behind him ahead of the team’s showdown with No. 19 Wisconsin on Saturday afternoon.

Like Friday night’s game against Iowa, Cockburn struggled in the first 20 minutes of play, scoring just six points while allowing fellow sophomore Trayce Jackson-Davis to score 12 points before halftime. The Kingston, Jamaica, native looked off his game defensively, constantly getting caught out of position, while he also struggled grabbing rebounds and silky passes from teammates under the basket on offense.

Something changed after halftime, however, as Cockburn stepped on both sides of the ball, holding Jackson-Davis to just seven points after the break while scoring eight points, including a huge dunk in overtime to seal an Illini victory. The 16-point, 10-rebound performance is Cockburn’s 12th double-double of the season, which is the most in all of college basketball.

Getting a complete game out of the sophomore center is going to be important going forward, but if Cockburn can consistently put up these kinds of numbers, the Illini will be one of the teams to beat in the postseason.

Following a career-best performance against Iowa where he scored 11 points and grabbed 10 rebounds, including a late three-pointer to give Illinois the lead, Grandison looked like a completely different player on Tuesday night. The Holy Cross transfer scored five points and grabbed two rebounds, but slow defense and lackluster decision-making nearly proved disastrous for Illinois, especially in such a back-and-forth game.

Grandison’s confidence should have been at a season-high coming into the game, but two turnovers in the first half led to Hoosier points. The junior eventually settled in and improved his ball security, but indecisiveness on both ends of the court are issues that certainly need to be addressed immediately.

Overall, it was a pretty average night for the redshirt junior, hence the rating, but Grandison looks like a promising addition to Brad Underwood’s starting lineup going forward.

After a run of good games prior to Friday night’s game, it seemed like Miller had turned a corner in his season after not living up to the initial hype. Unfortunately for the Chicago native, Tuesday night won’t be in his highlight reel, though he did score four points despite shooting 1-for-6 from the field.

Turnovers, which were an issue early in Miller’s Illinois career, plagued the freshman once again, with careless passing preventing him from playing a pivotal role. Two sloppy turnovers within the first 30 seconds of the second half, which also happened to be the Illini’s first two possessions after halftime, told the story for Miller, who has yet to truly find his role within the squad this season.

I did, however, appreciate Miller’s intensity on the defensive end, as he at least tried to overcome his struggles from beyond the arc by playing his part on defense. His hustle, passion and grit show Miller’s potential, but he really needs to find his offensive form moving forward.

As a senior, Frazier has been through the ups and downs with this Illinois program. After two years of disappointment, the Florida native didn’t jump ship, and it looks like he made the right choice after back-to-back outstanding performances, helping this squad solidify its place in second place in the Big Ten. After a season-best 24 points on Friday against Iowa, Frazier followed it up with another impressive display, going for a team-high 19 points, including four three-pointers, and he was one of the biggest reasons why Illinois left Assembly Hall with a win.

Frazier is also one of the Illini’s most reliable defenders, often tasked with guarding some of the opposition’s best scorers. On Tuesday night, Frazier came up big once again, bringing energy on defense while also forcing two turnovers, both of which came in the second half. If Frazier can consistently put up impressive numbers for the Illini, this team will be dangerous come March.

Like Frazier, Williams has been with this program through thick and thin, and he has typically a reliable presence in Underwood’s squad despite not being a tremendous threat on offense. But, unlike Frazier, the Peoria native struggled on Tuesday night, scoring four points, all of which came from the free-throw line, while also grabbing four rebounds in the win.

Despite scoring just one three-pointer across the last five games, Williams still leads the country in three-point field goal percentage (59.5%). You would think a player who leads the nation in that statistic wouldn’t be afraid to take shots when the opportunity arises, yet Williams looked uncomfortable any time he got the ball, opting instead to get rid of the ball as fast as he could. I don’t know what’s going on in his head, but Underwood needs to instill confidence in one of his veteran players and help Williams rediscover his form from deep.

It wasn’t a great night on either end of the court for Williams, especially on defense, his supposed specialty. Williams always looked a step slow, and he struggled to get his hands on the ball when trying to snag defensive rebounds. Underwood and the Illini need the senior guard to get back into his early-season form moving forward, especially after he was benched in favor of Grandison.

On the surface, it didn’t seem like Bezhanishvili had the best of nights, scoring just five points while also fouling out following a questionable call late in the second half, just 16 seconds before Dosunmu eventually joined him on the bench. But the Georgia native brought energy when the Illini looked stuck in first gear coming out of the locker room after halftime, splashing a corner three to open the scoring in the second half.

As one of the older players in this Illini squad, Bezhanishvili’s leadership and passion often translate to the energy of the entire team. Having someone like him in the team is essential to the team’s success, and his impact often transcends both on and off the court. While he may not be the flashiest or most athletic player in this loaded Illini team, the junior forward’s role is pivotal for their success.

Though he is one of the most important players in this team, Bezhanishvili struggles with unnecessary fouls and bad decision-making on the defensive end, something that plagued him on Tuesday. He was also tasked with guarding some of the best Indiana scorers, and though he is 6-foot-9, Bezhanishvili looked weak against Jackson-Davis and Race Thompson when Cockburn was out of the game.

Like Frazier, Curbelo struggled to make an impact in the first half, scoring just four points while also picking up two personal fouls. Curbelo stepped up in the second half and in overtime, however, finishing with 12 points, the most he’s scored since he went for 15 at Penn State on Dec. 23. The freshman guard also grabbed five rebounds, had four assists and made two steals.

Curbelo was one of the sparks the Illini offense desperately needed after a slow first half, constantly drawing fouls and getting to the free-throw line. His creativity and slick passing are what makes him so dangerous, and that once again proved essential to the Illini’s win on Tuesday. Though he still lacks a bit of discipline on offense, often leading to sloppy turnovers, the Puerto Rico native is one of the most quintessential pieces to this Illini offense.

Illinois needs Curbelo to keep putting together solid outings like this moving forward, both on offense and defense, and though he did have one turnover, he had three in each of the last two games, demonstrating improvement and confidence that will be important for both Curbelo and the Illini moving forward.