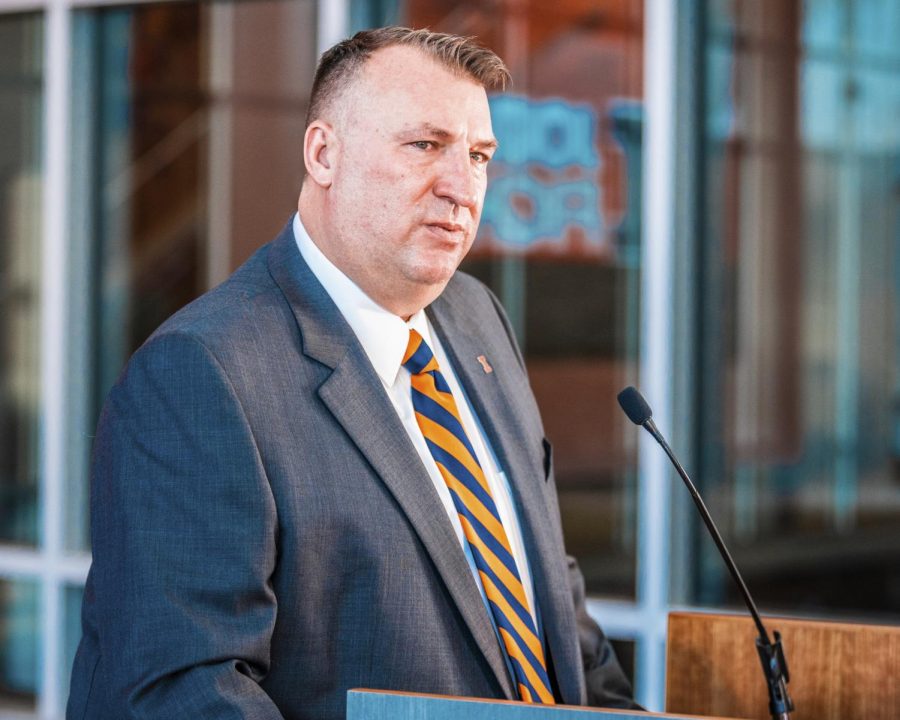 Bret Bielema welcomed in the final signees of the 2021 recruiting class on Wednesday, though it was far from normal for the newly hired head coach. Bielema was not the head recruiter for all but two of the young men that have just signed to play for him, but that hasn’t stopped him from welcoming them onto the team.

Ever since Bielema was hired at Illinois he has been very optimistic about the team and has shown his excitement in multiple ways. He started his signature hashtag on Twitter — #famILLy — and is very active in the community in multiple other ways.

And his excitement didn’t stop for this recruiting class.

“To sign a number of classmates before I was even named head coach, before I was here to have any part in their recruiting process, but to bring them into the family and accept them obviously with open arms,” Bielema said.

Although he was only able to welcome two of his own recruits to the program Wednesday, running back Josh McCray and linebacker Dwayne Johnson, Bielema was able to add a few more of his own guys via the transfer portal.

Chase Hayden, a running back that Bielema heavily recruited and coached while the coach at Arkansas, will now get to be his head coach for a second time.

Hayden transferred to East Carolina after three years at Arkansas, where he opted out of the 2020 season. Hayden hasn’t seen any action since 2019 but is someone Bielema has stayed in contact with and thinks can help strengthen an already solid running back group for this season.

“When I was let go at Arkansas … Chase just continued to stay in touch with me,” Bielema said. “To get him here now on campus, he’s already been a great addition. I think he has a lot of respect for the teammates … and has already made a good impression with a lot of people.”

Linebacker Calvin Hart Jr. was also picked up by Bielema through the transfer portal recently after leaving North Carolina State.

Hart was brought to Bielema’s attention by a colleague and committed to Illinois shortly after the two talked. He’ll either play inside or outside linebacker and has a chance to make a difference in a linebacker room that is very thin on paper for 2021.

The latest addition to the Illini via the transfer portal is Prather Hudson. Hudson comes to Illinois after spending four years at Georgia where he started 53 straight games on special teams for the Bulldogs, though is listed on the roster as a defensive back.

Like Bielema, Hudson started his career as a walk-on and eventually played well enough to earn a scholarship. Between a unique story and skill set that Bielema likes, he is excited for Hudson to join the roster for next season.

“I love his story, he kind of heard my same story, both of us started as walk-ons, he earned a scholarship fairly fast and played in the college football playoff,” Bielema said. “If you can come from a background of championships, of winning football, big stage college football playoffs national championships — that’s the type of stuff that intrigues us as well as the ability to play the game.”

One of Bielema’s strengths, as seen by his ability to hire quality coaches and retain players when joining a new team, is his communication skills and ability to gain trust with others. Especially in the transfer portal, that has come to help him.

Bielema was able to land Hayden in the transfer portal due to his efforts to stay in contact with players he formerly coached, and because of that, he gets a running back he really likes to join his group for this season.

“Certain players that I told during that recruitment process, just because I’m leaving you doesn’t mean I’m leaving you,” Bielema said. “Stay in contact with me, anything I can do to ever help … Low and behold when this opportunity came I was kind of hoping he’d reach out, and he did.”

As of now, Illinois has 16 signees for their class of 2021 and five total transfers coming in. Although it is expected that recruiting for this coming season has ended, Bielema said that there is still potential for another player to come.

Nevertheless, the new Illinois head coach is excited about where the team stands and is now shifting his focus to recruiting more guys himself for 2022, specifically in the state of Illinois.

“Today is obviously the end of ‘21 recruiting, we may add one on the end at the end, but that’s yet to be determined,” Bielema said. “Now all focus onto the ‘22 family and the 2022 class, and it’s been a huge emphasis since I got here to put it in the state.”