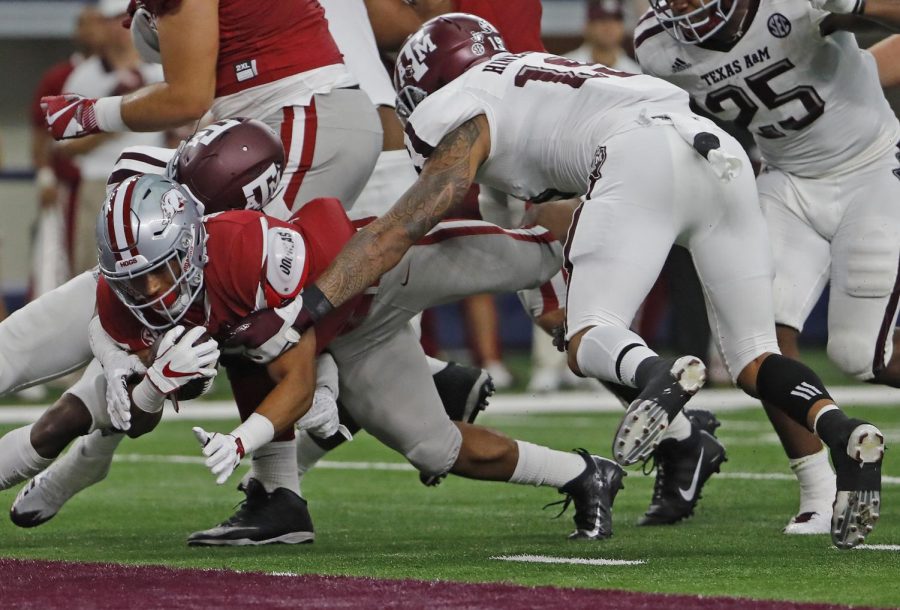 Arkansas Razorbacks running back Chase Hayden dives in to the end zone for a second quarter touchdown against the Texas A&M Aggies on Sept. 23, 2017 in the Southwest Classic. Hayden has recently joined the Illinois football team for the 2021 season.

To Chase Hayden, family is everything. As the son of former Tennessee running back Aaron Hayden, Chase grew up in a football family. When deciding between several Power-Five offers as a high schooler, Hayden looked to his family for help. When he went through a coaching change at Arkansas, Hayden listened to his family as he navigated the transfer portal. When he suffered an injury early into his first season at East Carolina, Hayden leaned on his family for support.

So when Bret Bielema formed a strong bond with Hayden and his tight-knit family during the high school recruiting process, the trust held between the three never waivered.

Hayden’s freshman year at Arkansas under Bielema was promising. In his first collegiate game, the former four-star prospect rushed for 120 yards and a touchdown against Florida A&M on Aug. 31, 2017. His production continued as over the first six games he rushed for 326 total yards and averaged 5.3 yards per carry, tying the team high.

Then, things started to crumble. In the seventh game of the season against Auburn, Hayden fractured his lower leg on a career-high 40-yard run, ending his promising freshman campaign.

“It’s been a lot of ups and downs, battling through injuries and stuff like that,” Hayden said. “Just trying to stay even-keeled and keep a positive mindset … Really just leaning on my family for guidance.”

Fast forward five weeks and Bielema was fired from Arkansas, marking a brief end to his collegiate coaching career. And Hayden’s offseason would be filled with rehab and navigating a coaching change all while losing the reason he went to Arkansas.

Hayden’s success under Bielema wouldn’t be replicated over the next two seasons at Arkansas, totaling just 290 rushing yards in 16 games leading him to the transfer portal and later ECU.

History, unfortunately, repeated itself as Hayden was injured just two games into the 2020 season. He then opted out of the season with a broken wrist. While Hayden originally planned to return to ECU in 2021, those plans were altered when Illinois announced the hiring of Bielema on Dec. 19.

Bielema, who kept in touch with Hayden through happy birthday texts and catch-up conversations every couple of months, quickly worked out a way to reunite with his running back.

“When he got the job I sent him a text and said congratulations and stuff,” Hayden said. “Then he got back with me and check and see how many scholarships he had. So he followed up and then I got here.”

For Hayden, transferring to Illinois to play under Bielema was a no-brainer, in fact, it was really the only reason he entered the transfer portal in 2020 and came to Champaign. Not only do the pair have a longstanding relationship, but Bielema is a proven winner who has helped high-level players advance to the pros.

Hayden will still have to compete for a starting spot, however, as running backs Chase Brown and Mike Epstein already have Big Ten success on their resumes. But the comfortability with the coaching staff and a determination to feel like his early freshman-year self gives Hayden confidence to finish the next two years out on a high note.

“It was an easy decision for me because Coach B was here so I’m just going to try and come in and compete and earn a spot,” Hayden said.