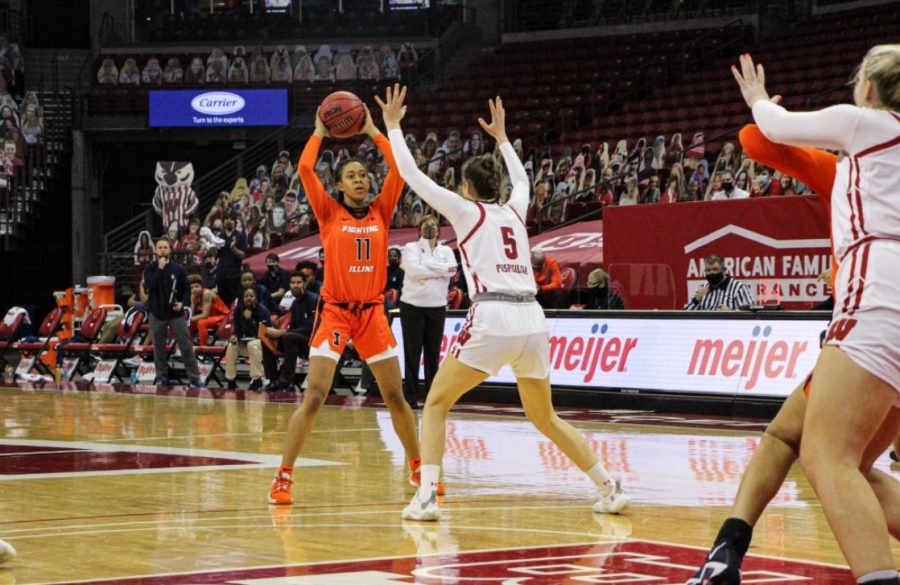 Sophomore guard Jada Peebles looks to pass during the game against Wisconsin on Sunday. The Illini will face off against Michigan State tonight.

The Illinois women’s basketball team will take on Michigan State tomorrow for the first time in 2021. The Illini were supposed to play the Spartans back on Jan. 14, but the game was postponed due to “COVID-19-related concerns within the Spartans program.”

While the first game has yet to be rescheduled, this matchup is set to be played in East Lansing. The Spartans are on a two-game losing streak and have dropped four of five games, though they played three teams ranked in the top 25 during that span.

Despite Michigan State’s recent struggles, Illinois has to watch out for Spartan junior guard Nia Clouden. She ranks fifth in the Big Ten in scoring with 20 points per game and is shooting 51% from the field and 34% from three. Junior guard J-Naya Ephraim is excited to guard one of the best players in the Big Ten.

“Going into every game I always tell coach I want the ‘star player,’ and (Nia Clouden) is obviously one of the best in the league,” Ephraim said. “Me and Jada might switch on here and there, but for the most part, I want her for myself.”

On the other side, the Illini have suffered through a tough season. They have yet to win a game in conference play but have been close a few times, most recently against Penn State and Nebraska. The Illini had fourth-quarter leads and were down by just one possession with less than a minute in regulation in both games.

they could not finish the job off, however, and have been unable to put teams away in the last minutes of games. Illinois head coach Nancy Fahey has been preaching the importance of taking quality shots on offense.

If the Illini are going to claim their first conference win, they will need sophomore guard Jeanae Terry to keep up her level of play. Terry is currently the leading scorer for Illinois, and she is coming off two monster games. Against Wisconsin, Terry notched a career-high 28 points while tying her career mark of five steals. The game before against Penn State, Terry became just the third Big Ten player ever to accumulate 21 points, 16 rebounds and eight assists in a game.

Starting against Michigan State, Illinois will be wearing exclusively black accessories. Announced via the team’s Twitter, the Illini will be wearing these accessories throughout the month of February as a tribute to Black History Month. The team has gone beyond just the gear they will wear.

“One thing we don’t want to be is just a video,” Fahey said. “Each day we’re going to bring something up, to talk about Black history, tell us something besides just saying it’s Black History Month. One of my assistant coaches started today, and we hope to do that the entire month.”

Tip-off is at 7 p.m., and Illinois will come right back to Champaign where they will face Purdue this Sunday.